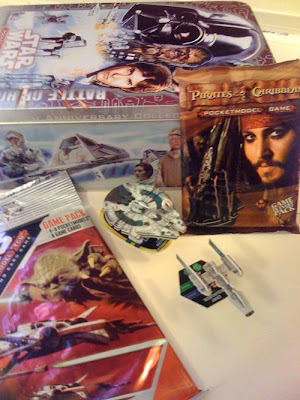 Now that midterm madness is over, I can get back to thinking about things that keep my aging brain from degenerating too much. This time, I'm concerned about the future of entertainment in general, and in imaginary worlds in particular.

The current concern was brought about by the sudden demise of WizKids, a company that manufactured wonderful collectible card games, tabletop board games, the very popular Hero Clix series, and several film-related card and model games like Pirates of the Caribbean, and Star Wars Pocket Models. In the interest of full disclosure, my son was a designer for the company, which was bought out a few years ago by the giant trading-card conglomerate, Topps, which was itself acquired last year by Michael Eisner's media conglomerate, Tornante Group.

Topps, according to the abrupt announcement (reported to me not by my son, but by a former student who keeps track of such things), "will still actively pursue gaming initiatives" but feels that "it is necessary to align our efforts more closely with Topps current sports and entertainment offerings which are being developed within our New York office." Since the games seem to be really popular, judging from the number of forums and other web-presence, I was a bit curious about the company's reasoning.

But the answer seems to be fairly simple, according to Jeff Grubb's blog: plastics. "The sudden and unexpected demise of Wizkids has many likely causes, and if I knew anyone still there, I might even find them out. But since I worked for the about five years back, most of the original team have left, voluntarily or involuntarily or in a combination of the two. So while I can guess about what goes through the Topps' executives minds, I can't really speak to it. But I do know that oil prices have shot up in the past few years, and with the price of oil, the price of plastic. And that cannot be good for a company's bottom line."

Grubb goes on to link a BBC story about the emptying of the Chinese city of Guangzhou, where the plastic pocket-model games were manufactured, due to job loss. So the impact of the Topps decision reaches far beyond the city limits of the WizKids home base, Seattle.

A comment on the GeekDad post (on Wired.com) about the announcement notes the popularity of the Pirates and Star Wars lines, so it will be interesting to see what unfolds over the next few weeks.

American business's short attention span seems to be at work here, and it operates on a number of levels. Entertainment media of all varieties are affected by corporate bottom lines, and their need to make big profits quickly. Unless vast numbers of people latch on to a product in a short period of time, the product disappears or gets dumped--no matter how high its quality or how promising it is in the long term.

This is most apparent in television, where terrific programs get canceled because they don't build up an audience soon enough. Two of my all-time favorite shows, Firefly (cancelled after only eleven episodes had aired) and the award-winning Nero Wolfe (which enjoyed two seasons--but deserved more), got the ax because although they had loyal (and in the case of Firefly, almost fanatic) followings, the numbers just weren't big enough. Both shows were smart, witty, and beautifully imagined, but that wasn't sufficient. Instead, we get season after season of inane reality shows that are cheap to produce and popular with the great unwashed.

You'd think that production companies and networks would be interested in mature people with disposable income, who are attracted by good stories and good quality, but that doesn't seem to be the case. Maybe it's because we're smart enough to see through advertising ploys and don't fall for every pill-shill that comes on the screen--but that doesn't explain why the guys who make the stuff we would buy don't advertise on these programs.

Since many of my students will end up working for advertising companies, I'll be curious to see what happens after the fallout settles from the current economic mishegoss. I'm sanguine enough about the future to think that we will come out okay, if our new President is able to assemble a solid team of advisors and can steer us toward some sanity. But as smart as he is, he won't be able to save us from ourselves if we insist on instant answers and results, and if we continue to act as if tomorrow is the deadline for everything.

Games and television are, of course, only two of the media we use to speculate about the future and work through ideas about what comes next. If we stop fostering the imagination that supports invention and creativity through visual media, books, and game-playing, we'll end up limiting future possibilities. Fantasy and science fiction, instead of simply being escapist strategies to help the disaffected cope with our angst-ridden world, offer a kind of laboratory experience, where different possibilities can be explored. And if reading declines (though I'm not convinced it's going to), TV and games are going to become even more important.

This week's New Scientist ran a special feature on the future of science fiction, and some of the responses (from some of today's best writers) are telling. Stephen Baxter points out that "science fiction has - rarely - been about the prediction of a definite future, more about the anxieties and dreams of the present in which it is written"-- and that may well be its primary value. I especially liked Margaret Atwood's response: "Not all of science fiction is 'science' - science occurs in it as a plot-driver, a tool, but all of it is fiction. This narrative form has always been with us: it used to be the kind with angels and devils in it. It's the gateway to the shadowiest and also the brightest part of our human imaginative world; a map of what we most desire and also what we most fear." Science fiction are us.

I'm really going to miss the Star Wars Pocket Model games and the Pirates games, not because I played them but because I liked the idea of them. Of course, I enjoyed the idea of having a son who designed space ships and pirate ships for a living, but I also liked the ships themselves: tiny little objects made to fit in miniature worlds, like the imaginary landscapes of Charles Simonds or of the dollhouses we played with as kids. They add a physical dimension to imagination, and help us map out strategies, or re-imagine the past, or simply to play--a vital ingredient in figuring out how to survive the present and invent a viable future.

Images: Some of the WizKids loot I've collected; a screen shot from the television series Firefly, via Wikipedia.
Posted by Owlfarmer at 10:26 AM