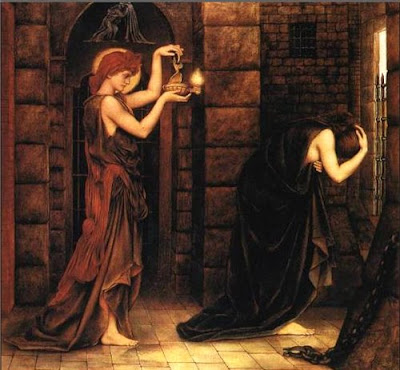 Sorry about the sappy title, and apologies to George Lucas, but there's an odd conundrum developing in the usually pessimistic corners of my brain. On the one hand, I look at the current economic mess and wonder, "What next?" just as the newest SNAFU hits the fan. Automakers, who have for decades ignored dwindling gas supplies and rising prices, resisted the need for less polluting vehicles, and who have been feeding the greed frenzy with the likes of Hummers and other fuel-insatiable monstrosities, have suddenly decided that they need help to carry on, or the entire country is going to drown in a tsunami of unemployment and related ills.

Or the banking industry, which has fed its own appetite for luxury and excess to such an extent that its CEOs and other executives have driven venerable institutions into a quagmire of bad loans and unspeakable debt, requires us to fork over 700 billions to help fix things--and some of the companies are apparently using it for bonuses they otherwise couldn't afford, or dividends, or other payouts that have nothing to do with saving the economy, and then bitching when somebody suggests using part of the windfall to provide an antidote for some of those "toxic" mortgages that caused the industry to implode in the first place.

On the other hand, however, I find myself waxing optimistic as I watch the new administration taking shape. The world as a whole seems pleased with American's choice of president, and some of the saber-rattling has calmed down. In this country, I hear positive comments on both the right and the left at the possibility that Hillary Clinton might become Secretary of State (something, by the way, I predicted to Beloved Spouse after she conceded the nomination to Obama), and there are increasingly audible noises about a Republican cabinet member. McCain seems to be in a conciliatory mood, and pundits are welcoming back "the old John McCain"--the one who brokered deals on campaign finance across the aisle, not the one who inexplicably chose rabidly partisan Sarah Palin as his running mate.

Abraham Lincoln is back in the news, thanks to Doris Kearnes Goodwin's almost prophetic book, Team of Rivals, which Barack Obama seems to be using as something of a guidebook in deciding how to populate his cabinet. Wisdom is back in style, and intelligence has been resurrected as a badge of honor, rescued from the dung heap under which it has been buried for the last eight years. I don't mean to be crabby about this, but the denigration of the intellectual in recent years has caused me more angst than any single issue aside from the war, and has made my job --and the job of teaching in general--immeasurably more difficult.

And therein lies the rub. It's really hard to be a utopian when things are going well. But for the first time in a very long time, I'm not sure the world is going to end before I die (my 65th birthday, December 21, 2012, notwithstanding). Even my daughter, who had grown increasingly disinclined to raise children in the world as it has been, decided after the election that maybe I will be a grandmother someday, after all. So despite the economy's current downturn, I can't help but see the possibility, at least, of a rebound if Obama can construct coalitions of people who really want to save the world--or at least help the world save itself. Perhaps fear of abject economic collapse is a good thing: an impetus to finally create workable solutions.

Of course, if things really do get better, the sequel to More News From Nowhere will look a little silly, based as it is (in its planning stages, at least) on the probability of near-future catastrophe.

The discussion in New Scientist I mentioned in my last post, about the future of science fiction, is also relevant here, because utopias spring from the same impulse: wondering about what can and/or will be. Economic difficulties are not the only ones we face, of course, and Kim Stanley Robinson is spot-on when he says "we have to do the impossible and imagine the next century. The default probability is bad - not just dystopia but catastrophe, a mass extinction event that we will have caused and then suffered ourselves. That's a story we should tell, repeatedly, but it's only half the probability zone. It is also within our powers to create a sustainable permaculture in a healthy biosphere." So perhaps the task of science fiction and utopian writers alike will be to imagine conditions that either stave off or ameliorate the catastrophic possibilities.

Immersed as I am with the current academic quarter, and in working on a myth course I haven't taught in years (but get to in January), I don't have much time for writing now, anyway. But I will, at least for the moment, enjoy the possibility of peace, economic recovery, and/or positive changes in the environmental situation. And if, in future, I'm out of a job in terms of plot devices or blog fodder, so be it. I think it will be well worth the price.

Note: just in time to help me celebrate, Wall-E is out on DVD today. For anyone who hasn't seen it, I can't say enough to recommend it. Pixar may have produced the single most hopeful film released in recent years, and this is the perfect moment for its wide release for home viewing.

Image credit: Evelyn de Morgan's Hope in a Prison of Despair, 1887, via Wikimedia Commons.
Posted by Owlfarmer at 8:39 AM