Spring Is Icumen In 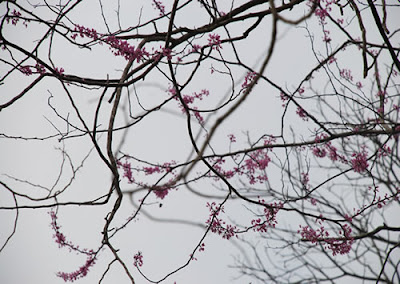 The last of the daffodils is hiding behind the remains of last year's sea oats (Chasmanthium latifolium, not the true variety, Uniola paniculata), which I need to pull out before they turn the entire property into amber waves of grain. The rest of the daffy-down-dillies are spent, as are the paperwhites that made it so pleasant to sit in the sunny garden a couple of weeks ago.

But the wisteria catkins are already beginning to bloom, so by the weekend the back fence should be awash with purple. I've let the stuff grow wild, primarily because our back fence looks like crap. A few years ago it was wonderful, because we had bought rolls of willow screen to hide the alley. But since then it's deteriorated and when people walk their dogs in said alley, our dogs go nuts and attack the fence, so it's shredded and rather ugly, and needs to be taken out. Spring break is coming up for Beloved Spouse, so that'll be his chore. 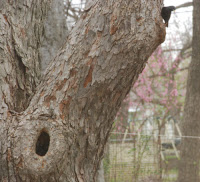 As if all the buds and blooms weren't enough, I'm being entertained by an adamant sparrow, determined to use a twig of dry sea oats for his nest. The twig probably weighs as much as he does, and messes with his aerodynamics, so he's not being very successful. A pair of starlings (one of whom appears in the picture at left) is also building a nest in one two emptied knots in the pecan tree outside my window. The squirrels are giving them fits about it; but every year the birds are at it again, despite the hole's accessibility to marauders and proximity to human activity.

The fig trees are beginning to produce leaves around their buds, promising a decent crop. Another chore for Beloved Spouse is to clear out the dead branches before the new growth is completely leafed out, so it will be easier to harvest the fruit before the mockingbirds snitch it all. I'd like to have enough figs for a confit this year, as well as for enjoying directly from the tree.

Pears and peaches are in bloom, and have been for nearly a week. Pear blossom petals are already starting to blow across the driveway, drifting in front of the window like snowflakes. Our Redbud (the image that opens the post was taken from below, looking into the cloudy sky), which is in decline, is nonetheless blooming and littering the front driveway with little pink splotches. Last year when this happened, the late, much lamented Biscuit rolled in the petals and covered himself with confetti. I wish I'd gotten a shot of that. 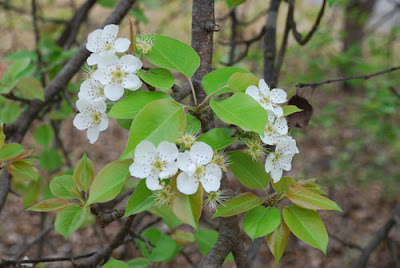 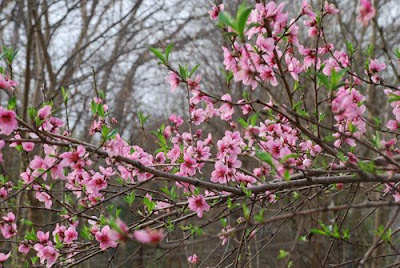 The muscarii, a small number of which I enherited from the old gal who used to own the house, have naturalized to such an extent that they nearly cover the front yard. But they're most plentiful on the north side of the house where they and the ajuga (one small bud is already out; see below) have taken over, and there's very little grass left.

That's fine with me, and when I'm able I'm going to liberate the irises next to fence i

n front of the kitchen window, and replant them in less structured places. Flagstones will be added for a path, and it should be rather pretty. Some unidentified bushes we transplanted there last year from outside the study's west window didn't make it, so they'll have to be composted. The scion of the original peach tree is finally blooming; it's a different variety from the one pictured above, and buds later. It bore a few peaches last year, so I'll take better care of it this year and maybe get some jam out of it.

The ilex variety (not sure which one, but could be Ilex vomitoria--lovely name--Yaupon holly, which seems to be The Holly of Choice in these parts) that grows tall and fat along the north and west walls of the house (and hides our bad paint from casual observers) is covered with new berry-growth. They'll eventually be big and bright red, and the birds feast on them all winter. I will have to cut some of it back again, but the great thing about this holly is that it provides privacy but lets light in because it stands away from the house, leaning outward a bit. I can walk behind it, and it doesn't block the morning sun, even though one can barely see the front windows hidden behind it.

In the front border, only a bit of salvia is blooming. A little clump of pinks (red ones) I stuffed under a huge coleus plant (long gone) in my big red ceramic pot on the front stoop last summer has come out of winter intact. Since I only have a month before I start the whole valve-replacement process, little will get done to spruce things up, so I'm enjoying what's here, now.

Which probably isn't a bad plan, really. All things considered.

Update, 10 March 2009: I should have added "Lhude sing Who Cooks For You?" to the title of the post, in keeping with the old English rhyme. The barred owls were out in force this morning, beginning a long competition for mates. Their calls are distinctive enough that I know there are at least two males, one who seems to have a frog in his throat. They were somewhere else in the neighborhood, but it's only a matter of time before their less melodic vocalizations start occurring right outside my window. Also, I added a picture of the starling outside his nest.
Posted by Owlfarmer at 8:47 AM

WOW what a long post thanks for sharing .I remember last year I put up a terrace of three nest boxes for the sparrows and the only thing to take advantage was a coal tit who tried for about ten minutes to take a large twig through small hole much to my amusement

Well, welcome, Don. None of my posts are ever short, so thanks for sticking with it. It's always nice to have new folks drop in--especially from Britain. I'll have to spend some time on your site getting to know about Thanet. Since the farm is primarily about place, I'm always up for learning about the places other people love.

What lovely flowers!! I am still waiting for actual flowers here, but things are starting to show colour and sprouts. I am so jealous that you have grape hyacinth taking over your yard!! I can only wish. I have a few, but they are a long way from taking over.