It's About Bloody Time 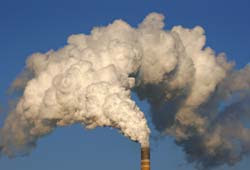 Here's the deal. According to the Associated Press, Texas leads in CO2 emissions and "cranks out more than the next two biggest producers combined, California and Pennsylvania, which together have twice Texas’ population." This is largely because Texas relies so heavily on coal and coal-related energy sources. Despite this fact, however, if one looks at a map that sorts out who's doing what about emissions, the Lone Star State shines in its lack of any action at all.

The situation may be changing, according to a front-page story in today's Dallas Morning News, "Texas is taking a greater interest in global warming." At last. But don't hold your breath, because the legislature of the Don't Tell Me How to Sit in My Car State will take its sweet time in getting around to doing anything, and it'll only do it at all because it faces federal sanctions if it doesn't clear up some of the most polluted skies in the nation.

Population-wise, Texas is heavy in libertarian values, and this fosters a notion that we can take care of ourselves and the gummint has no bidness tellin' us how to do our bidness. And if any program is going to cost taxpayer money, well, y'all can just count us out. Hack, hack, cough, cough. 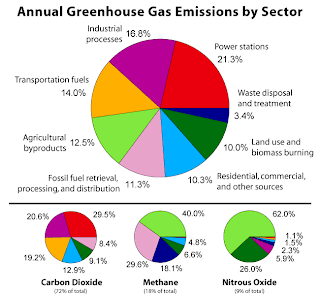 Back when I was teaching logic at UT Dallas (in the '90s), one of my best students was a tattooed fella who wore leathers and a bandanna to class every week. He was a pre-law student whose sole purpose in life was to become a lawyer in order to help repeal the Texas law that required motorcyclists to wear helmets. By the middle of the semester, however, the helmet law was already off the books, and I never saw the guy again.

Folks around here just don't like being told what's good for them, even if the consequences of their actions cost the rest of us money and lives. But now, since it looks like Texas will be able to make some cash on pollution trading rights, something--probably not the best thing--is bound to happen.

So don't go looking for radical change, despite Boone Pickins's efforts to convert us all to wind power over coal and nukes. But if you want to try to do something, in addition to conservation voting, sign up for Green Mountain Energy (the only 100% wind choice we have in the state; this isn't a shill, either; they're who we use)--even though it costs a little more--and keep up the conservation measures: lower electricity use, and adopt full-time gas-saving measures year-round.

I'm still putting along at 60 mph in the center lane of the expressway (even though gasoline is down to about $1.85 a gallon this week), and combining trips as much as possible, and the old Civic's up to a consistent 37 mpg since its 90,000 mile checkup. Since I'm seeing fewer Hummers on the road these days, the economy may be behind the fact that folks aren't trying to honk me off the road, and there are quite a number of drivers using the same measures. I'm thinking silver lining here . . . .

In some ways, the state's independent (or, as we Firefly fans say it, "innapennant") spirit can be helpful. We don't really have to wait for the legislature to get on the ball. We can do our own part, and (in addition) alert our congressfolk that we really want to see Texas join the group of states who recognize the problem and who are willing to do something about the part we're responsible for.

To really help the situation, of course, home-use solar and wind technologies have to become affordable for those of us middle-income types who can't invest thousands in solar panels and wind generators. Even though many of these technologies pay for themselves within a reasonable number of years, the up-front costs are simply too high to make them economically viable options for most of us.

If you're interested in where your state and/or county stands in the statistics of climate change, check out the calculators on Scoreboard.org--especially the Pollution Locator, where you can find out how particular communities measure up. You can punch in a zip code and see how your county stacks up--and then locate the official state, local, and federal contacts to make your concerns known. They might even be in a more receptive mood at the moment.

Image credits: The opening shot is from the Environmental Defense Fund's 2006 article on TXU's plan to build 11 coal-fired plants; the Greenhouse Gas by Sector chart is by Robert A. Rohde and is part of the Global Warming Art Project, via Wikimedia Commons.
Posted by Owlfarmer at 9:29 AM