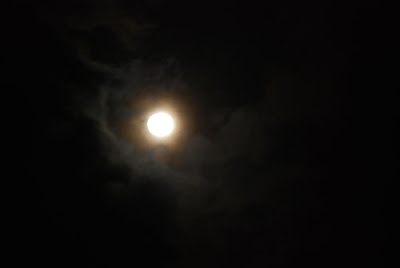 I think I'm finally getting the hang of this Skywatch Friday thing. I'm not really one for joining in many of the games bloggers play, but I love the idea of this one; last week over 300 people posted pictures of the sky on their blogs, and some were quite lovely. One does get an idea of what skies are like all over the world once a week--and it's rather reassuring, for reasons I don't quite understand.

When I first found out about this through Arija's blog (from South Australia), Garden Delights, I posted clumsily, and thought I'd put an image and icon on the sidebar every week--over there by the astronomy and geology stuff. But the pictures there are tiny and can't be enlarged unless you link them to a larger image online, so I decided to go ahead and make this a once-a-week ritual, trying to be sure the photos (I take a lot of sky pictures) are reasonably topical, but when they're not, I'll post my favorites.

This week's is part of an ongoing project, and it's something of a miracle (in my sense of the word: a happy chance and confluence of possibilities). Since October of last year I've been trying to photograph each named full moon for a year. I was pretty sure it was going to end on Tuesday night, because skies in Dallas were completely clouded over and it had rained while I was teaching. I called Beloved Spouse from school and asked him if he could see the moon (we live about 30 miles north of Dallas). He said it was iffy, that the moon was peeking in and out of the clouds, but he would try. When I arrived home at around 10 pm, it was to some disappointment, because he hadn't been able to get the shot.

Just before I went to bed, however, I decided to take one last look. The clouds were moving pretty quickly, and some clear spots were on their way. I could tell where the moon was, so I grabbed the camera and stood out in the cold, waiting. As the moon appeared, I took a series of quick snaps (no tripod to keep things steady), and got a couple of decent ones--although this one seems best at the moment. A couple of the others have possibilities, but will need a little doctoring in PhotoShop, and I don't have time now--but this is the real deal, anyway. Unedited, pure, and spontaneous.

So happy Skywatch Friday, folks. There's a linked icon over on the side bar, and a copy of my previous week's offering. The Full Worm Moon*, by the way, is so-named, according to Spaceweather, because "It signals the coming of northern spring, a thawing of the soil, and the first stirrings of earthworms in long-dormant gardens. Step outside tonight and behold the wakening landscape. 'Worm moonlight' is prettier than it sounds." And indeed it is. Taking the photo gave me an opportunity to enjoy the drama associated with clouds and light in the night sky.

Just for the pure wonderfulness of it, here's a NASA photo of Discovery, waiting on the launchpad in the light of this same moon. The launch has been delayed until Sunday, but the picture was too good to resist. 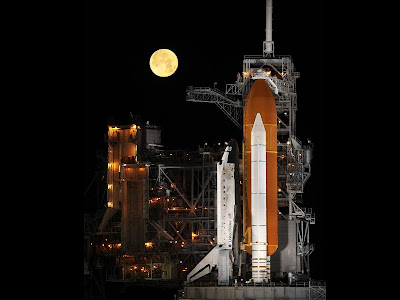 *Some almanacs say the Worm moon comes in February, but Spaceweather's my bible in this regard, so I go by what they say.
Posted by Owlfarmer at 7:19 AM

That is a great shot of the space shuttle!

I didn't take that one, but you're right.

Thanks for the informative and interesting post! I really do think I will take a quick walk outside just now to see if I can see the moon!

Wow, the bottom photo is amazing.

Well, whatever worm dreamed this moon up, he did a great job! You live near Dallas? are we talking Dallas, Texas? I was born there, went to college in Denton, just curious. Anyway, your photos are terrific, thanks for sharing them!

Just back from trying to find the moon - it was covered with clouds. I'll need to mark the date down for next year :( Thanks for stopping by - I like Morris's patterns and designs!

Bryan--there are more of them at nasa.gov. Click on the gallery.

Sylvia--yes, that Dallas. We're in McKinney, at the other end of 380 from Denton.

What we do for the perfect shot. Your moon shot is very good, worth the wait in the cold! Cool idea showing the same moon on the NASA photo.

What a wonderful photo and thanks for the information. Thanks for sharing and have a great weekend.
Smiles

I love the moon, but it's hard for me to get good shorts with my little camera. We have several telescopes, one of which we use at our float cabin on Powell Lake in British Columbia. We have just scheduled a star party as a part of the Year of Astronomy. It should be exciting to share the sky with others. I invite you to come see my March snow shots from Powell Lake, BC. - Margy

I've been seeing the beautiful full moon too and the other morning I saw what I would call a moon set. It was going down about 6:30 am in the same exact spot the sun sets. It was too cold to go out in my jammies to get a shot and I will always regret it. You have captured the moon very well this week.

Here in the foothills of the Sierra Nevada in California this moon should be called "Snake Moon."
With warm weather comes snakes- mostly rattlesnakes. I prefer worms over snakes.
Thanks for sharing your worm moon. I really like the pic of the shuttle.
CAprice

I cannot imagine why NASA's shot is better than yours!!! ;-) You did well, considering what you were working with.
Yesterday, I caught the moon just going to bed as the sun was rising, and I am quite pleased with those shots, not that I have posted them yet...

Holy smokes! Look at all the posts! Lucky you for catching that shot of the moon. This reminds me that I need to pull out my telescope ant t-mount for my camera.