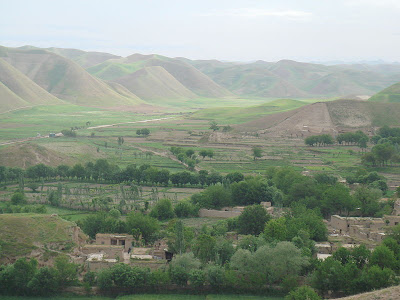 I watched a News Hour broadcast the other night about some of the things American troops are doing in Afghanistan to help win the war for hearts and minds. And although I do think there is a military role beyond blowing things up (accidentally or not), I was a bit disturbed by the description of some of the aid work U. S. Forces are engaged in.

PBS's Margaret Warner has been reporting from Afghanistan all week, and I appreciate the perspective she's providing. But in her Reporter's Notebook piece for the segment on the Nebraska National Guard "Sodbusters" Agri-business Development initiative, she describes their work as follows:

This is the soft side, the warm face, of the U.S. presence in Afghanistan, an exercise in nation-building (not reconstruction but building anew) designed to help this agrarian society -- among the five poorest on the planet -- leapfrog into the 21st century. It's a tall order, in a country where the literacy rate hovers at about 25 percent. The gameplan is to help the Afghans develop the economic and social wherewithal to withstand the blandishments, ideology and threats of the Taliban and its array of insurgent allies.

For that, the Army and National Guard units have deployed ADTs and PRTs (provincial reconstruction teams), augmented by experts from the State Department and other agencies, to build bridges and roads and help the Afghans develop their skills at earning a living, governing and managing their own affairs.

This sounds well-intentioned and certainly indicates a more productive use of our soldiers. But it's also just too big.

Why are we talking about "leapfrogging" into the twenty-first century when these people have been denied, through both our efforts and those of the Russians, the gradual development of their own ways of life, and a more natural progress toward integration of tradition with new technologies? Why are we even talking "agri-business" here instead of sustainability?

In our own country the family farms that formed the backbone of the Republic are being driven out of existence by the Big Bidness Giant Farm Conglomerate types who worship at the altar of Monsanto and other chemical companies bent on genetic modification and patenting of seeds stolen from traditional farmers in other parts of the world. Why on earth would we want to subject Afghanistan to even more manipulation of their traditional ways of maintaining their land and their livestock than they've put up with since before the Soviet invasion?

For multiple generations, Afghan farming communities withstood drought and meteorological misadventure by using methods that worked for them. Part of what has made the Taliban successful in this region is that they don't threaten these ties to the past. (For a brief history of the bad policies--ours and those of the former Soviet Union--that led to this mess in the first place, see my post about Saving Ariana from a few weeks ago.) I had hoped that we had learned something from our mistakes, but it looks now as if good intentions are getting in the way of good sense. There are programs that show promise, but I can't see that trying to turn a neolithic economy into a post-nuclear agricultural machine overnight is going to win us any long-term allies.

Instead of building infrastructure these folks might not be able to maintain, encouraging wanton growth, and addicting farmers to chemical fertilizers and modern mega-farming techniques, we need to be starting small, and working within traditional parameters. "Infrastructure" should mean wells, low-tech sanitary systems, simple solar technologies (like solar ovens), reliable, renewable energy sources, and food-storage facilities--not fancy paved highways and bridges in seismically unstable areas.

Help these people do what they already know how to do, and protect the aid workers who are trying to build sustainable communities--rather than making them dependent on high-dollar foreign technologies grounded in foreign values. The wise path is not paved with concrete; it's worn by goats and sheep and herdsmen, and maintained by men, women, and children who have worked the land since long before our ancestors left the coasts of Europe have their way with this continent.

The last time I looked, we weren't doing such a great job in our own twenty-first century economy. Maybe we could learn something from the Afghanis.

Image credit: Northwestern Afghanistan, by Koldo Hormaza, via Wikimedia Commmons.
Posted by Owlfarmer at 11:53 AM