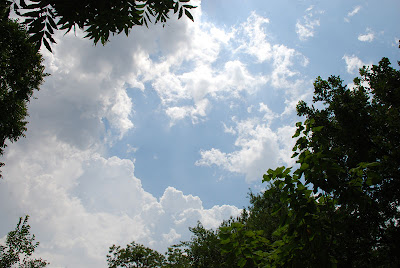 Last Sunday afternoon the sky began to fill up with big billowy clouds, so I got the Nikon out and took advantage of the display. A few hours later, Beloved Spouse and I relaxed in the back yard, around my new-old table, on my grandmother's old metal chairs. Thunder started rumbling in the west, so after picking a few figs, we headed inside. Then the lightning started, so we unplugged the computers from their power sources, which is what we usually do in such circumstances, and I headed to the kitchen to make dinner.

Not ten minutes into the prep, a whacking great thunderbolt hit the tree outside our study. We didn't seem to lose power, but it scared the crap out of me. When we surveyed the damage we saw that chunks of surface bark were missing from the tree and had been blown all over the place (including onto the market umbrella that shades a picnic table near the tree). A neighbor came over to make sure we were okay (he'd seen the flash from the property behind us), and after fixing the one breaker that had been thrown off, we went back about our business.

Until it was time to go watch the news. Then we discovered that the only room affected was the room where we watch television. The brand new LED set and the cable box were no longer "engaged." Fortunately, we keep our feathers numbered for just such an occasion, and brought the other TV and its box in, and will have the Nerd Herd from Buy More in to fix the set in a week or so. But we will also be seriously upgrading our surge protector--and some of the romance has gone out of summer storms, nice as it is to have some rain and cooler temperatures.

I'll probably also not press my luck by sitting on those metal chairs in advance of a storm, either, even if it's still several miles away.

The photos below were all shot with the Nikon D80. 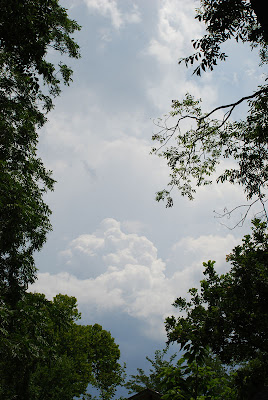 The nasty stuff is starting to move in, above. 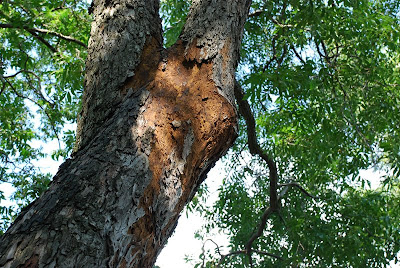 Damage to the tree is pretty obvious from this angle. 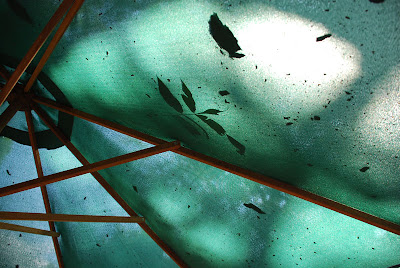 Bits of blasted tree showing through the umbrella cloth.
Posted by Owlfarmer at 2:16 PM

Omigosh, the metal chairs! This will help us to remember (as if!) to sit in the plastic ones when admiring our New Mexican storms.

Thanks for your kind comments (and the link!) on both of my blogs.

You're lucky it could have been so much worse. Just a couple of days ago a girl got struck by lightning on the other side of town here in Minneapolis, standing next to a tree in her front yard, with tragic results.

Wow! that would have surely scared the crap out of me, too! Terrific shots, though!

Have a great weekend!
Sylvia

How fortunate that you went indoors when you did. Sometimes Mother Nature acts unpleasantly to remind mere humans how powerful she is.

Well, what a great story to go along with the pictures. I have been way too close to lightning strikes myself on more than one occasion. Love your cloud pictures.

This is a great series of sky shots. love the sky framed in trees.

Oh, boy! Some great decision to remain inside and great pictures. I have always loved thunderstorms, especially the delightful frisson of fear at a near strike. Up in the Northern Interior of BC there are some awsome summer stunderstorms which are fascinating to watch build and then to unleash the powerful bolts and sounds. Of course our animals practically lay on our laps trembling, cowering in abject terror, which is really a right reaction to these phenomena. G

I share GEM's fascination with thunderstorms, even though it's mixed with wonder and terror. Around here, of course, tornadoes frequently accompany them, and my iPhone stays on the local weather radar as a result. The most poignant and evocative literary work on lightning I've ever read is Gretel Erlich's A Match to the Heart which I read not long after my first heart surgery. She was hit by lightning and it affected the lining of her heart. Since then I've harbored a particular respect for the phenomenon--perhaps even more so now, while I wait to see if the tree is going to make it.

We rarely had thunderstorms in Los Angeles but the Owens Valley, now that was a different story. I can remember some very exciting storms. I'd turn out the lights to better enjoy them. It was usually just me and our sons, Hubby of course was usually called in to work. If the lights went out or we heard the circut breaker trip he would go over to the plant with out being called. Your grandmother would have know about that from her days at Cottonwood.
I'm glad the damage was limited to the tree.

The trees there must be a lot sturdier than they are here! Lightning usually splits trees in half up in this neck of the woods. Glad you guys are okay!

Martha's right about those Owens Valley storms. Thing is, you can see those suckers coming for hours before they arrive at the southern end of the Valley. They'll tear arroyos into the desert, but the water will disappear as soon as it stops falling.

If I'm ever lucky enough to move back, I'm installing one of those big water tanks we see around here in nature preserves--although if I can find one I can afford, I'll put it in the Accidental Garden and if it keeps raining like it has been, I'll never have to pay for watering the garden again.