A Confederacy of Nincompoops 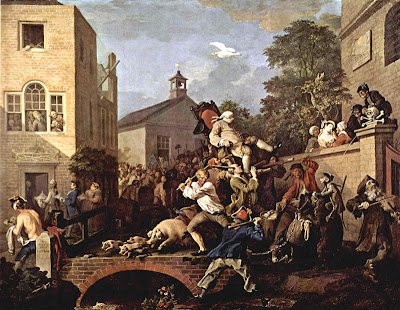 Since the decline of Western Civilization--at least as manifested in these United States--currently shows signs of accelerating rather than abating any time soon, I thought I'd post this both on the Farm and Owl of Athena because it relates both to political economy and to education.

I have, of course, stolen the title--cheesily altered--from John Kennedy Toole's Pulitzer Prize-winning novel. His hero, Ignatius J. Reilly, was a fully-realized snark and I loved the book--but haven't read it in twenty years. If Toole had lived to see what happened to New Orleans a few years ago, he'd probably have written a sequel; but the world was already too much for him, and he died by his own hand over ten years before A Confederacy of Dunces was finally published. 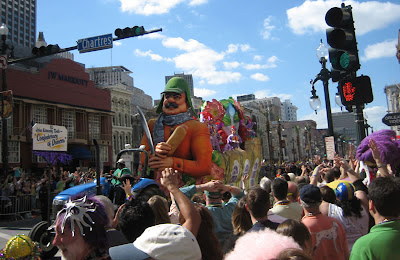 Toole was a latter-day Jonathan Swift, critical of cultural excess and stupidity in the '80s, and he drew his title from Swift's own "Thoughts on Various Subjects": "When a true genius appears in the world, you may know him by this sign: that the dunces are all in confederacy against him."

Now, I'm not saying that Barack Obama is a "true genius," even though he well may be. He is, after all, a politician, and he seems poised to weasel out of a host of platform promises on some Quixotic quest of his own--bipartisanism. But for sure, the dunces and nincompoops have arisen, if not in actual hoards, at least in loud numbers that make the evening news every bloody night, and promise to make it more and more difficult for him to accomplish what he was elected to do. 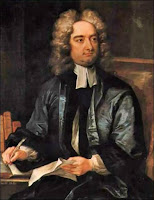 Another of Swift's aphorisms (from the same source as Toole's title) speaks to the current phenomenon of loud-mouthed, ill-informed rantings that go on in the so-called "town meetings" and that may well signal the end of civil discourse in this country.

Few are qualified to shine in company; but it is in most men's power to be agreeable. The reason, therefore, why conversation runs so low at present, is not the defect of understanding, but pride, vanity, ill-nature, affectation, singularity, positiveness, or some other vice, the effect of a wrong education.

Or of no education at all, perhaps. Otherwise, why would any reasonable human being yank a kid out of class in fear of being "indoctrinated" by the duly elected President of the United States? The promised topic is a pep-talk on staying in school in order to excel in life. Objections to the address on the basis of some paranoid fear of subliminal persuasion to embrace Socialism sounds to me like these parents--who really don't want their kids in public school anyway, but can't "afford" to home school them, or sacrifice anything to send them to private parochial schools--just don't want their children educated at all, in any meaningful sense of the word.

They want the Bible taught in school, but they sure as hell don't want Biblical hermeneutics taught because that might cause kids to question particular interpretations of the book itself, or perhaps to insist that it be read in context. They want Creationism or Intelligent Design taught to "balance" the godlessness of "Darwinism," and they don't "believe" in the evidence emerging from science in regard to climate change. They want their kids to read "the classics," but only the ones they approve of. History has to tell it the way it was told when they were kids, despite any evidence that's emerged during the last hundred years or so that contradicts received views. And the United States must never, ever, be portrayed in a negative light. Art history can be taught, but parents want to be assured that little Chase won't see breasts on a Greek statue, or little Britney won't see the giant phallus on a Pacific Island totem, so don't take 'em to a museum.

I know that not all parents act this way, but the furor over President Obama's speech has brought back a flood of memories about recent skirmishes in local public schools, and the constant battles that go on over Texas textbook choices. I long for a new William F. Buckley to appear to bring intelligent voices back into Conservative conversations. David Brooks and Rod Dreher can only pull so much weight, and even they're drowned out when the screamers take the podium and start out-shouting reasonable discussion.

The truth is, if we keep on this path toward willful ignorance, afraid to let our children make up their own minds about issues, they'll never learn to think critically, and there won't be anyone around in the future to solve the problems we're not addressing today.

As I discussed the Norman Conquest in my art and design history classes this week, I was once again reminded that our children don't know much about the history of the world. Medieval life is a mystery to them (except the Disney or Monty Python versions), not because it's not especially interesting, but because some nincompoop school system doesn't think "ancient history" is very important. This despite the parallels between the Middle Ages and the present that keep popping up.

Around here it's because you'd have to talk about controversial religious matters, and point out conflicting ideas about the role of religion in the formation of the modern world. But modernity and change are issues that parents don't seem to want to deal with, and they don't seem to be particularly worried about being condemned to repeat what we've forgotten about history.

The focus on education is increasingly seen as "elitism," even as we're told to send everyone to college who can breathe, whether or not he or she is really interested in doings so, or prepared to work at it. Those of us who have gone beyond college are suspect, because so many of us favor thinking carefully instead of proceeding headlong into an argument with nothing but opinions as grounds.

Among Swift's other remarks (not all of which are particularly useful) is this: "Some people take more care to hide their wisdom than their folly."

Some people seem to be reveling in their folly, at the expense of ever attaining wisdom. The old guard--the politicians and commentators who could discuss issues rationally despite their differences, like Ted Kennedy and Bill Buckley--is gone, and I for one miss the folks who could keep us honest and reasonably well-informed. Their measured assessments of current issues are swiftly being replaced by squawking and flummery, and our country is intellectually poorer as a result.

Images: William Hogarth's Chairing the Member, from The Humours of an Election series, 1755. When considering how to "illuminate" this post, I immediately thought of Hogarth's rabble-rousers in this series on popular elections. New Orleans, Mardi Gras Day, 2006: Rex Parade float commemorating A Confederacy of Dunces on Canal Street near the corner of Charters. It's good to see that Toole's book is still celebrated in his home town. Photo by Infrogmation. Jonathan Swift, portrait by Charles Jervas, 1718. All from Wikimedia Commons.
Posted by Owlfarmer at 10:52 AM

Another well-argued, thought-provoking post! I fear some in the UK are following the dubious lead shown by some of your countrymen - 'twas ever thus. One of the first principles in education surely is to listen then research further in order to express a reasoned and reasonable point of view. Sticking fingers in ears and chanting 'Lalalalala' simply irritates. Shouting down is worse, but worst of all is the set answer trimmed and trotted out in response to the question the respondent wished or hoped or expected to be asked, politicians being the most frequent offenders. Our better-informed and more persistent news presenters do not allow them to slide away but somehow their answers are never satisfactory.

Thank you for this post. I live in a community that has been holding "emergency meetings" for concerned parents with regard to the President's speech to schoolchildren.

To give you a feel for this place: Our public library has two whole shelves of books refuting Darwinism.

Those of us balanced on tiny blue islands out in this angry red sea need to hear your voice. We appreciate your well-reasoned arguments more than you can imagine.

Thank you both for the encouragement. Sometimes I feel pretty lonely out here, but I was reassured this weekend by the huge preponderance of letters to the editor of the Daily Rag noting how stupid and self-defeating it would be to ban the President's speech. One person even wrote that she'd keep her kid home so he could watch it. But then, I don't imagine all that many of the fringe actually read the paper in the first place, so maybe I'm just grasping at optimistic straws

I too have been shaking my head over the reaction to the President's speech. It seems a little strange, I suspect most of these parents consider themselves great patriots and yet they don't want their children to hear the democraticly elected president?
Sometimes I think Americans are a strange people but then I remember my anthropology classes and realize that this behavior is quite normal, unfortunately.

Thank you Candace for articulating what many Americans are thinking and feeling about the insanity that has flourished since Barack Obama was elected.

Too many folks are watching entertainment channels like "Faux" News rather than seeking out the truth and researching the facts. Your statement regarding these buffoons, "measured assessments of current issues are swiftly being replaced by squawking and flummery, and our country is intellectually poorer as a result" bears this out.

To not allow your children to hear the President of the United States speak? McCarthyism comes to mind. Or maybe now we may consider "Limbaughism."

I can only hope that as this administration corrects the errors that have been thrust upon us for the past eight years, and gets this country back on track, the naysayers become more enlightened.

Thank you for this thoughtful post. I fear the death of civil discourse presages the death of American civilization, such as it is. I too find it very discouraging that people are so close-minded as to prevent their children from hearing a positive message from President Obama, and the heckling of the president by a congressman only deepens my despair.

Thanks also for the information on "A Confederacy of Dunces," a book I only recently discovered as I carom about the blogosphere. It is indeed a brilliant book, and I appreciate learning the allusion to Swift.

The one picture and your commentary reminded me of The Storming of the Bastille another great picture. You are correct I have been using the term "theater of the absurd" in reference to a lot of what is going on in this country right now thanks to the "apostles of doom"