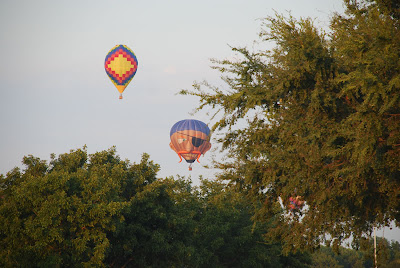 Things are coolin' down around here, and we're comin' up on the Fall festivities, so (since I've got nothin' else at the moment) I though I'd post this.

Skies are great backdrops for what human beings do in them. Like fly airplanes and gliders and dirigibles and other technological wonders.

But balloons are big around here, and every Fall, one of the towns south of us hosts a Balloon Festival, and Beloved Spouse's tennis team has to park the folk that come by. They earn money doing this, which helps foster the Collin College tennis team's various outings on their way to occasionally winning NJCAA championships. When my kids were little, the Festival happened on open space that they eventually ended up living on for a bit. Now it's held on the grounds of the College.

This is from last fall. It's raining now, and there's not much sky action, so this'll have to do. This year's festival starts in a couple of weeks. About all the entertainment BS gets on these outings is to take pictures. I especially like this one, being a devout Pastafarian and all.
Posted by Owlfarmer at 7:00 PM

Beautiful, colorful balloons and clear blue skies! Doesn't get any better! I love the flights I've taken in balloons! Love being on eye level with the eagles!

Even better is your post on "A Confederacy of Nincompoops." I love your commentary and left a comment.

I will return. It would be nice if I could get your blog updates via email but I see no such option.

I just learned about the Pastafarians yesterday, in an article in the local paper about the religious affiliations people list on Facebook.

Well, I learn something new every day - Pastafarians!!
I like the pirate balloon. We have balloon festivals too and I am always delighted by the imagination evident in balloon design.

So you like my fence? It's preety good for keeping the sheep out of my garden. Nothing wrong wuth liking it but for a Texan just a tad unusual. I always thought the national anthem of Texas was 'Don't fence me in'.

Well, not everyone who lives in Texas is a Texan. Most of the ranchers around here are big on fences to keep the rabble out--and then there's the "construction" going on along the southern border. I like fences (like the "bottle fence" pictured on Owl's Cabinet of Wonders from a while back) for their ability to do useful things like keeping dogs out of potagers. Yours looks wonderfully utilitarian and practical.

Cool. We have a balloon festival here in the fall, too, and I'm pretty sure I've seen both of those before. How interesting! (Oh, to have the time and funds to travel from one balloon festival to the next!)

I wish I was not so chicken, I would love to go on a hot air balloon ride. Thanks for posting your picture.

As a lapsed scientist, I found the Church of the Flying Spaghetti Monster to be a nice anodyne for the discomfort one is made to feel in this neck of the woods if one doesn't have a personal relationship with a savior. Next time I teach logic I'm going to use the Gospel (a really funny read, by the way) as a textbook.

Any converts, or just plain silly people, might enjoy the fact that National Talk Like a Pirate Day is coming up September 19. http://www.talklikeapirate.com/