Skywatch Friday: If on a Winter's Evening 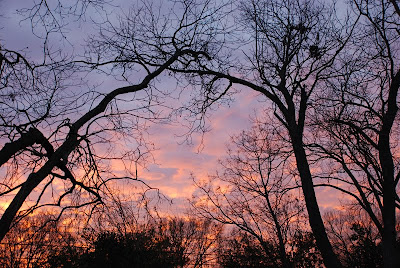 Last weekend I bought Sting's lovely new(ish) album, If on a Winter's Night, filled with atypical tunes for the season. I played it Wednesday, and that evening caught a terrific sunset after a few rather bleak days. Of course, it's not quite winter, according to the calendar, but by my reckoning, the so-called "first day of winter" (the Solstice) should really be called Midwinter's day, since it marks sun-return, and growing amounts of daylight henceforth.

Whether or not it's officially winter, it feels like it. It's so cold everything's dead, the water in the metate is frozen, and birds are having at the pyracantha. But if we keep getting sunsets like this, I'll stay content.

The first shot is directly out the back. The second (below) shows the remains of a contrail, suffused with pink light. 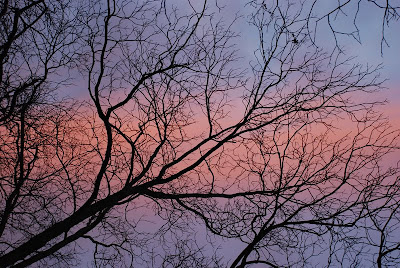 Hope everyone's Skywatch Friday is as lovely--and thanks again to our ineffable team.
Posted by Owlfarmer at 5:34 PM

These are superb. Wonderful colours.
Sydney - City and Suburbs

Well, I love Sting to begin with and your shots are indeed superb! Beautiful colors and a stunning backdrop for bare trees! Terrific!!

Beautiful skies compensate for less enjoyable happenings. It's chilly though not particularly cold here but even so the blackbirds and blue tits are feasting on our pyracantha berries.

Lovely Solstice skies. The contrast between the mottled clouds and the stark black branches is beautiful.

Thanks for visiting my blog. I see we're both Ursula Le Guin readers. I've just finished re-reading 'The Left Hand of Darkness'. It stuns me each time.

beautiful pinkish sunset! i wouldn't complain seeing one like that everyday no matter how cold it is! :)

I love how the bare branches of all shapes and sizes form such intricate patters around and across that gorgeous evening sky. Like a painting. Happy skywatching.

These remind me of winter evenings in my life before living in the desert.There is just nothing like a sky like that with the bare silhouettes. Great captures!