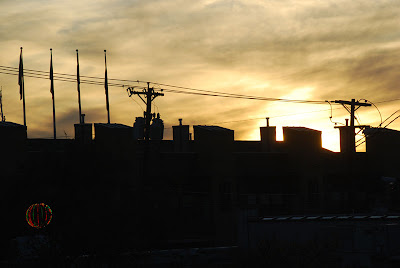 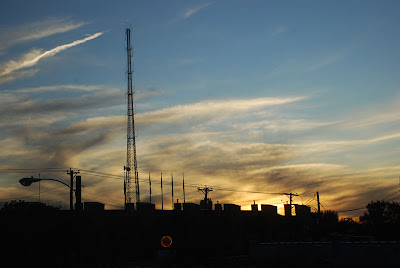 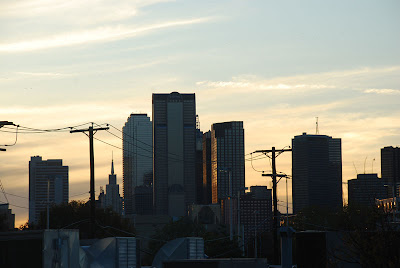 As usual for this time of the year, I'm immersed in a flood of exams and projects to grade, so I have to fall back on earlier photos if I want to post this week.

I mentioned in the Cabinet that we spent Thanksgiving with Little Owl and some of her friends, and her enormous mutt, Homer.

They live in a converted cotton gin, in an historic part of Dallas near the lower part of Elm Street, commonly known as "Deep Ellum." The loft is huge and, of course, since Little Owl has a BFA in interior design, spiffily decked out. It also has a grand view that takes in both Fair Park (hence the flagpoles in the first shot) and downtown.

When I noticed that a sunset was happening, I grabbed the Nikon and got the shots included here. I've lately become interested in the juxtaposition of technology and nature in photos, and these are good examples of how nature manages both to manifest itself and visually conquer all of the industrial detritus we've thrown up against the sky.

These aren't the kind of pictures I like to post, but they represent the inescapable reality of urban living. And, quite frankly, I think they're a good deal more honest than the sentimental sunsets in suburbia I usually contribute.

Happy Skywatch Friday, folks. I'll try to get some Solstice pictures on Monday for next week's entry.
Posted by Owlfarmer at 8:12 AM

The ugliest things we can make can be transformed or overcome by nature. Abandoned buildings and asphalt soon are decked in grass and weeds.

For me, the beauty of the sky does little to soften the intrusion of the power lines. Strange, given all the years I lived at the power plant.
I can appreciate a beautiful building but quickly retreat to my home where I can view the natural world and only rooftops intrude on my view across the Sacramento Valley to the coast range. Better yet is the summer when I can retreat to the Sierra.

Martha, I guess its the philosopher of technology in me that makes me even want to find something pleasing about power lines. My grandfather managed the LADPW power plant at Cottonwood until he died, and I learned when I was very small to see through and around the aqueduct and the power lines, and to hear through the noise of the plant. I would dearly love to be able to live in a place where I'd be able to see nothing but nature. Even rooftops get in the way for me, and I have to "see through" those as well.

And, Kawks, what the hell kind of comment is that? I see these pictures perhaps ironically--but not even in my most cynical moments do I find them all that amusing. Good thing you're good at animating rabbits. :)

These are great pictures :)

Well, they do look familiar since I'm originally from Dallas and my son and his band played frequently in Deep Ellum. I don't like the reality of urban living either, but the skies are still beautiful and colorful and you caught a lovely shot!

Thanks for stopping by!

It's really funny when you think about it. We would rather not see such urban intrusions yet we all live with them in some form or another. It makes you wonder how they got there if no one really likes them. (A little like war, now that I think of it. No one likes it, yet we are always having one).

Beautiful silhouettes against the sky. I especially like the last shot where the sun's rays are reflecting off the glass on the tall buildings. Very nice work!