Skywatch Friday: In the Bleak Midwinter? 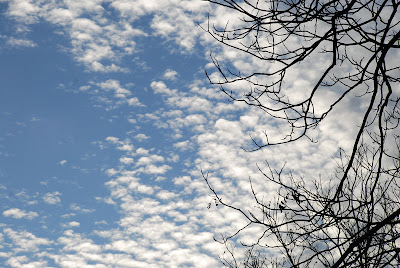 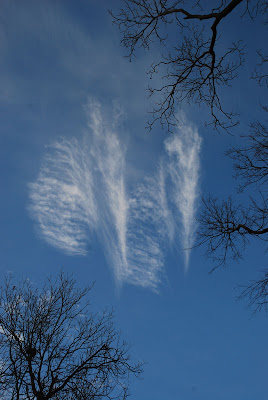 It's Winter Solstice week here in the Northern Hemisphere of Planet Earth.

In North Texas, however, there have been few signs of winter, except for today's promise of a white Christmas. My Skywatch Friday sequence focuses on the old saw, heard repeatedly among oldtimers in this neck of the woods: If y'all don't like Texas weather, wait a minute; it'll change.

On the eve of the solstice I took the shots that open the post: pretty white clouds, contrails deformed by high winds aloft, and moderate temperatures.

On the actual Solstice, I tried to capture the sunrise, but gave up because it was too hard to get between the power lines across the street, and it wasn't all that spectacular anyway. I did record the morning sun on the bare tree trunks, and later got the evening sun doing the same thing, from a different direction. The first photo was taken facing north; the second facing east. 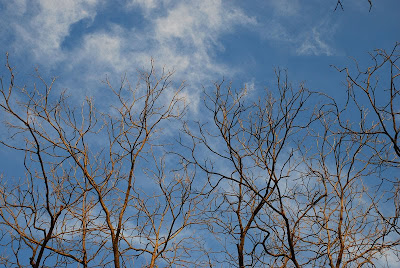 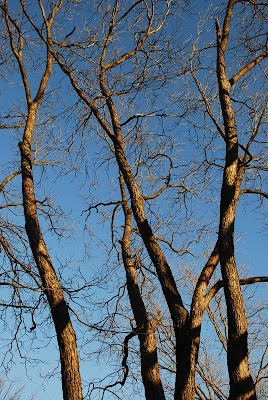 On the 22nd, change was in the forecast, and the first of two fronts began to move in. Darker clouds formed to the west, although the weather remained unseasonably balmy for another full day. (Folks were walking their dogs yesterday afternoon, wearing shorts. The folks; not the dogs). We even got a bit of color in the evening. 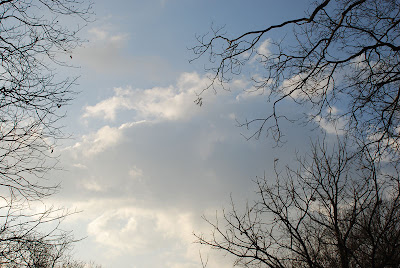 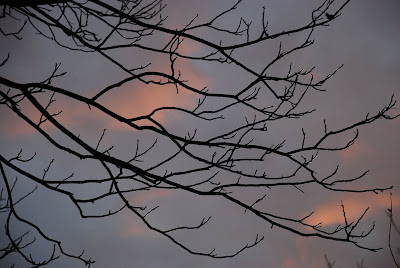 Last night the harbinger of the Big Storm (we get very excited about weather around here) came through, and as we drifted off to sleep we heard claps of thunder to the north. Morning dawned misty and dreary, but still not terribly cold. The temperature dropped quickly, however, and now at 2 pm CST it's 2C and snowing.

Nothing is sticking, but if the temperature plunges much more it will, and we'll have snow for the "puppies" (our dogs and my daughter's behemoth) to play in Christmas morning. If you squint (or enlarge the photo), you can see some flakes against the tree trunk below. This is actually our second snow since the beginning of Fall, but this one promises to stay around a bit longer if it actually keeps falling for a while. 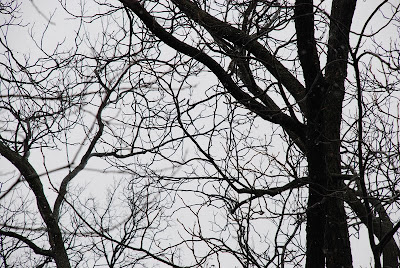 To all visiting Skywatchers who celebrate it, have a happy Christmas. And in case I'm too busy grumbling about something next week to post celebratory photos, have a good New Year as well.
Posted by Owlfarmer at 11:46 AM

Great series of skywatch photos.. I love the shot with the pinks showing! Happy Holidays!

What lovely dancing clouds in the second shot! I really like the next-to-last shot as well. Thank you for sharing all of these, and for your words as well.

I love those dancing clouds in the second shot, too!! Love the bare trees etched against the skies! Terrific shots!

Wishing you and yours a very Merry Christmas! Enjoy!

Really neat post! I especially like the clouds, the sunlight on bare branches and the last shot. Happy Holidays!

All your photos are great, but my favorite is the second one. That is a very interesting sky shot.

Great skyward shots Candice! The second shot is fabulous! It looks like two pelicans swimming side by side. A very Merry Christmas to you and yours.

The storm brought us - in no particular order - snow, ice, and rain. It's all gonna freeze tonight! Merry Christmas!

Love the whole series of day by day shots. We have that same saying up here---must be true everywhere.
So you did get a white Christmas afterall. Goodie!!

What cool clouds and sky! (Actually, I'm reading a book with that title right now.)