Spring in the Year of Global Weirding 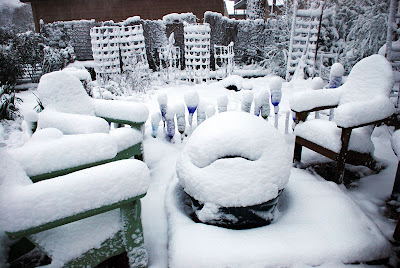 The winter solstice occurred yesterday around noon, but today marks the first full day of spring.

This morning we awoke to another record snowfall. At 8 am, the snow was six inches deep in the back yard, and it was still falling. Now, at almost 11 am, the sun is beginning to emerge, and what white stuff is blowing around comes from the trees that were weighed down with it only a few hours ago.

Of course, locals are going to use this as evidence that environmentalists are full of crap and global warming is a leftist hoax (after all, it's snowing--so it can't be warming). But then, these guys still haven't been able to fathom the difference between climate and weather. They also seem to have a very abbreviated notion of geological processes--which only makes sense if they're operating under a view that the earth is only six thousand years old.

Periodic changes in the path of the jet stream, the cyclic appearance of El Niño, solar activity, and other meteorological phenomena contribute to what our weather ends up looking like on a local scale over relatively short periods of time. Climate is, of course, a whole nother, highly complex, albeit manifestly human-influenced, process that takes much longer (tens of thousands of years overall)--even though what we're spewing into the atmosphere at the moment will probably begin to affect local weather sooner than we'd like. So no, the three feet of snow that's fallen in my back yard this year does not signal the coming of the next ice age.

As I learned in my Pleistocene geology course thirty years ago, we're probably still in the midst of an interglacial period (scientists refer to it as the Holocene) and may not actually have seen the end of the most recent glacial period. The thirty thousand years or so since humanity started mucking about in Europe (having already made it from Africa to India and Australia) may be just a blip on the screen, and we may well mosey back into another major glaciation a few thousand years from now.

But we do seem to be having impact already--what with the melting tundra and all--so the smugness being felt around these parts will probably be short-lived. As a whole, Americans seem to be far more worried about financial deficits than they are about what kinds of resources will be available to their offspring. So cranky, dusty old crones like me are probably condemned to sit back and wag our fingers, waving copies of Margaret Atwood's The Year of the Flood under their noses.

Despite all my innate curmudgeonliness (with apologies to Archie, who thinks you have to be a guy to be a genuine curmudgeon), I loved what I saw when I awoke to the white wilderness outside my back door. The bottle fence looked like ice-pops (see opening photo), the carbon sink like a little forest, and various bits of detritus around our distinctly grubby looking yard were all covered and softened and hidden away under piles of pretty white flakes of frozen water. Even the front porch got hit, because the snow came in from the southwest rather than from directly west. 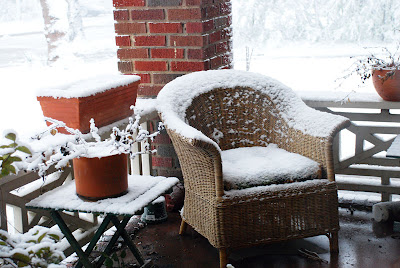 The sun is again hidden away by clouds, but the reflected light from the snow adds a cheery glow around the inside of the house--rather a distinct difference from yesterday's rain and gloom. I'm inspired to get some home-keeping done, do some slow cooking, and grade some projects--all possible during the next few hours because daylight savings time is now in place. 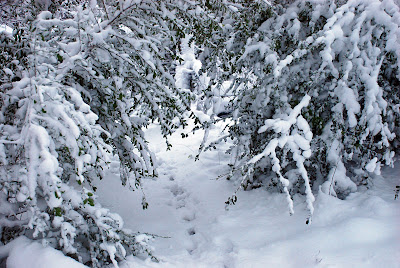 But that's another rant, and the "puppies" want to go out for another romp (note footprints leading into the "forest," above). They've loved this stuff since we first got them (six years ago), and I truly hope that this will be their last chance to enjoy it before next winter. I really do need to get that garden in if I'm going to feed us fresh veg over the next few months--depending, of course, on what comes our way in terms of weirdness over the spring and summer.
Posted by Owlfarmer at 9:27 AM

I really should have taken pictures of the snow this morning. It had a "winter wonderland" feeling being in the middle of Dallas and seeing a huge field of untouched snow.

SIX thousand??? And here I thought it was only five :)

That first photo is lovely, though very intriguing and mysterious. Do you think that you might post another shot of the same scene when the snow has melted so that I can figure it all out?

Here in BC Lower Mainland we had one of the mildest winters I can remember for a longish time. So much so, that for the winter Olympics held here last month snow had to be trucked in for some events from Manning Park east of Hope.
Right now, my grape hyacynth is in bloom but starting to go off to be replaced by tulips and I am still harvesting kale planted last summer. However, it seems we are to anticipate drought this growing season, which will hurt growers here this year. Nothing is guaranteed, and we forget that at our mutual peril. How do we feed our massive populations when weather cannot be depended on? That is a question most people are loathe to ask. But Spring Equinox having just passed, the main question asked is "Is the real estate situation going to be fortuitous for me to sell up and pocket a gain?" Pretty obliviousness, I'd say. G

Snow covers everything with a forgiving blanket of beauty but when it melts - aargh! - the grubbiness is even worse, at least in our garden.