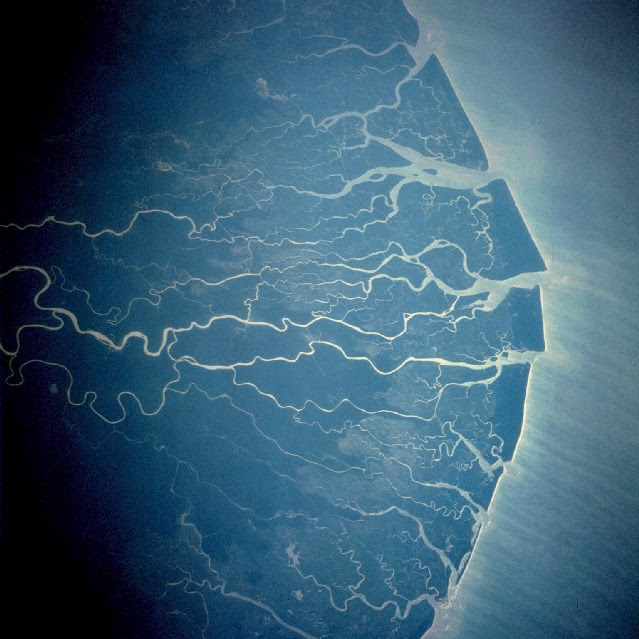 As usual, the latest issue of Orion Magazine is chockablock with pithy, thought-provoking material, including another entry from that cranky young upstart, Derrick Jensen. This time he's on us about not sitting on our butts while the rest of the planet's inhabitants (i.e. non-human species) are being lost at the rate of about 120 a day.

And he may be right that if we don't get a whole lot more active about making significant change, we may well end up being one of those species one day. Jensen doesn't happen to think that the answer lies merely in composting or driving less or buying into the green economy, however. He thinks we have to get together and actually force changes in policy and practice, like the Movement for the Emancipaiton of the Niger Delta (MEND) has done in Africa against Big Oil (for some photos of the impact, see this article from National Geographic). Of course, one man's liberator is another man's terrorist, and the tactics used by MEND militants might be described as either, depending on the context. The people of the Niger Delta have indeed been exploited persistently and often brutally over the last fifty years, and their environment has been trashed just so folks in this town can drive whatever behemoth internal combustion-run vehicle they want to (it's a free country, after all), using fuel that costs less than a gallon of milk does.

The conversation about Jensen's article is running rather mildly (so far) compared to those about earlier essays, but I'm somewhat heartened that people generally seem to think that we can both be more active about how we pursue change and continue to make "lifestyle changes" that lessen our own personal impact on the planet. The armed rebellion option probably won't emerge, because Orion's readers tend to be a peaceful lot, and even though that's really the only way revolutions have occurred in the past, most of us don't cotton to violence--even the fairly mild kind exhibited by the more obnoxious tea-party types.

Violence these days brings with it too many complex consequences. We're still reeling from 9/11, and have since begun to realize that our collective response (kill the bastards) has not ended the threat of further violence. While a goal to end abortions might be laudable, killing abortion doctors accomplishes nothing, and seems counter intuitive if killing is what you want to stop. (Yes, I know that the argument pits the "guilty" doctors against the "innocent" unborn, but that's about as simplistic an idea as one can invent.) We are what we do, and if we do violence we invite violence.

So while I think Jensen is right that we need to be much more assertive in our political and social efforts to effect change, I don't really think we should start manning the canons. And in some cases we have to be rather subtle about how we approach problems, because every other guy on the street seems to have a concealed handgun permit. We can vote, we can join community groups, write letters, participate in environmental campaigns, volunteer, and practice what we preach. If you want to resist Big Oil, buy a hybrid vehicle or an electric car the next time you're in the market, and drive it to the nearest public transportation node whenever you can. (I say drive because the nearest DART station is fifteen miles away. Those of you who have one nearer might be able to walk.)

I don't think that the efforts more and more of us are making--composting, growing your own veg organically, buying renewable energy, increasing energy efficiency, consuming less, recycling more, driving fewer miles in less-polluting automobiles, conserving water--are futile acts of spitting in the wind. They may not be enough, but they're better than nothing. If we can, by example, convince more and more people that change can happen this way, perhaps it really can.

But, as Jensen reminds us, another 120 species went extinct today; we may, thus, eventually run out of time.

Image credit: NASA photo of the Niger River Delta from space (north is on the left), via Wikimedia Commons.
Posted by Owlfarmer at 8:24 AM

I have read some of Jensen's essays in the past, and it is hard to argue with the uncomfortable points that he raises.

I agree with him that individual actions (alone) won't fix things, but I think that small actions do set a good example for changing behavior. To me, time is the devil sitting with us in this corner we have painted ourselves into.

If it took us 100 years to develop the immense automobile/oil infrastructure we depend on now it may take us another 100 to change that over. (And that is just one area of ecological concern)

I'm not sure where Jensen's figures come from, but even commonly agreed upon rates are pretty high (see the Species extinction page at www.whole-systems.org). Some of these are, of course little teeny weeny critters, but the biggest danger to the whole extinction problem is the loss of biodiversity and resulting damage to the ecosystemic web. I'm afraid it's going to take the loss of very large creatures (great apes, whales, elephants) to jar people into doing something until it's already too late to save even our own skins.

What recent political uproars have indicated to me is that most Americans see themselves as individual centers of their own small universes, concerned only with how a particular policy affects them and theirs. I'm getting a wee bit weary of hearing claims about what The American People want--when it's hardly what I want, and last time I looked I was still an American people.

Well, I for one talk the talk, but don't always walk the walk. Take for example my recent insane purchase of an item of desire, which i certainly don't need, and the production of which has far flung environmental consequences. On pure whim and greed, I ourchased 2 Shino wood-fired bowls which were part of the result of a three day, 8 cord of wood firing in an Ombu, which is reported to not release carbon particulates into our local atmosphere. The kiln was built by a Japanese kiln-builder, flown in to design and fabricate it. Gas-powered saws were used to prepare the wood for appropriate size for feeding the fire. The firing took place in a suburb of Vancouver - the wood had to be transported to the site by gas guzzling trucks. The ware resulting from this elaborate and ecologically expensive wood firing are mainly for decorative and not utilitarian purchases - for show, not use.
I sit here and consider all that has been consumed in order for me to have in my possession two objects of desire. Cognitive dissonance is what I suffer, along with my companion North Americans. It is almost impossible to keep at the forefront the notion that every one of our habitual actions need reassessing in light of how every one of our behaviours has consequence for every other living being as well as ourselves as living beings in an interdependent continuum. I don't think a violent revolution is in order to make changes in the status quo. It will take a paradigm shift in philosophy in order to effect the change necessary for us humans to take our minimal spot in a limited environment. Tough call, one which I am not so certain we can deal with sensibly. G

GEM, I'm not sure we can fault ourselves for satisfying a genuine desire--as opposed to a mere whim. The love of art (and these are objects of art, not simply of desire) fuels our human beingness, and if we weren't so stupid about so many other things, the environmental cost of art would not be nearly as high. If you don't shop for crap at dollar stores, I see no reason to apologize for objects that reflect craft, skill, creativity, and love! If we all limited ourselves to purchasing what we truly need and truly desire, we would undoubtedly buy considerably less and cost the natural world substantially less in the long run.