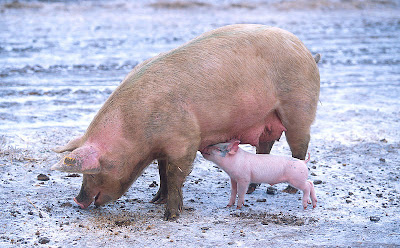 It all started the other day when I was on my way down to school for a department meeting and got stuck in traffic. And I do mean stuck: in the middle lane, with exits backed up, and with nobody the least bit interested in providing me with space to move over and get off. So I sat there, and both Vera and I were fuming, because her mileage was plummeting. We started off the most recent tank of gas with an mpg average of about 58. Since I tend to drive only when I have to, that means two thirty-mile trips per day, four days per week--and not much else.

By the end of the traffic jam, we were down to 52. Yeah; I know people who would kill for that, but for us it's disappointing. And it took an hour and forty minutes to go thirty miles.

But that wasn't the worst of it. For some considerable chunk of that 100 minutes, I moved along side a truck transporting pigs to an abattoir. The temperature on the highway had to have been 102F at least, and the poor pigs were becoming ham before they were even dead. Some of them poked their noses out of the grating, trying desperately to get some fresh air. Some were fighting. Some were biting the metal grille on the side of the truck. Fortunately for me, Vera's recirculation system works splendidly, so I didn't have to breath pig perfume; but I was so upset by this experience that I burst into tears right there on Central Expressway, and sobbed uncontrollably for a good ten minutes.

There's nothing like the spectacle of abject suffering to open one's eyes to the ultimate insensitivity of modern "civilized" human beings. How could we possibly allow another creature to suffer like that, just for a cheap pork chop?

That night, as I downed a bratwurst at the ball game (rationalizing my enjoyment by noting that this particular pig had not died in vain, and that it would probably be the last mass-processed pig product I ever ate), I discussed the problem with the Beloved Spouse and my daughter, and reflected on the Culture of Anonymous Meat.

Mind you, this is essentially what led me to my vegetarian days when my children were growing up. For fourteen years I ate no meat except that which had been killed by friends, or fish that had been caught by relatives. I've actually got nothing against eating meat; rather, I thought that unless I had the guts to kill it (or at least knew who killed it), I didn't have the right to eat it. Later, I tried to eat organic and/or sustainably raised meat and poultry, which has become easier and easier to do. Sometimes "all natural" is the best I could do, but I've at least tried to be conscious of what I was doing. Eating responsibly has, at the very least, to include being mindful of where your food originates and how it's processed.

I think that one reason this situation was off my radar is that 1) my vegetarian years were also Kosher years, so pigs didn't factor into any consideration of carnivorism at all and 2) the pigs I'd known in Taiwan lived happy, sloppy lives before being swiftly dispatched not far from where they'd been raised.

Coincidentally enough, this morning I was reading an old issue of the British version of Country Living (August 2008), which featured an article on commercial pig-farming in England, and noted that "The pig, along with the chicken, is the most abused of all farm animals--sheep graze year round and cows only overwinter in a barn, while most pigs live in concrete prisons" for their entire lives. And while neither sheep nor cows are particularly gifted intellectually, pigs are pretty bloody smart--which makes their torture all the more alarming. All this mistreatment leads to "bland and flabby" meat "devoid of character," according to the author (smallholder Hugh Fearnley-Whittingstall)--and (to prevent infections in close quarters) it's laced with antibiotics. So why are we eating this stuff at all?

Perhaps it's because we're just ignorant of how bad things really are. After all, many of us are now aware of how "milk-fed veal" gets treated and haven't touched that in years. So I'm hoping that most people are just uninformed. But if it's willful ignorance, more people need to be stuck beside a pig-transport on a hot day. Without air conditioning.

Complacency is in some ways a coping device in a complex, problem-ridden world. I do harbor hope that most people tend to wake up when faced with information that exposes that complacency (things like vast oil spills, perhaps). So in case anyone reading this isn't quite up on the nature of pig farming in these United States, or if you don't believe me about how bad factory pig farming is, read this article from BoingBoing (Big factory pig farms are some of America's worst polluters)--but don't go there unless you're prepared to be horrified.

None of this is necessary. For information on bettering the lot of pigs, and sources of humanely raised pork, see the following:
If we choose not to pay attention to the problem, I fear for our future as a species even more than I already have been. A culture that decides to torture animals for expediency is capable of all manner of atrocities--as we have, come to think of it, seen all too frequently in the past.

Image credit: Sow and piglet, by Scott Bauer, via Wikimedia Commons. At very least, this mom seems to be out rooting--something factory-farmed pigs don't get to do.
Posted by Owlfarmer at 10:47 AM

My middle daughter would applaud! She has been a dedicated vegetarian for 20 years and never misses an opportunity to declare her philosophy, which doesn't always go down well with her siblings trying to raise their children, her nieces and nephews! The rest of the family members are ambivalent, lazy I suppose, paying lip service to the ideal, buying 'organic'and 'free range' but we wouldn't consider eating dogs, cats or horses, no matter how compassionately farmed and transported and humanely slaughtered. Gandhi said, 'The greatness of a nation and its moral progress can be judged by the way its animals are treated.'
Oh dear - time for a rethink!

Growing up in my Hungarian Post WorldWar 2 family, the only chicken we ate was what we butchered ourselves, the only pork from the yearly pig we bought and had raised for us on a nearby farm, where pigs ranged and rooted and were treated humanely. Beef was a scarcity. The first time i got a good look at a large pig farm in the Fraser valley, back in the 80s, had me horrified. A concrete floored prison where pigs were incarcerated cheek to jowl living in their own excrement which as taken out by a mechanical scoop, and never dry or clean enough was the place they had to live out their lives. Pigs are as intelligent as dogs, and yet our culture would react with harshness if dogs were treated in a similar way.
The true fact is that we as a group are largely inured to be several stages removed from all manner of things we consume, and as a result have scant respect for the entities we do consume, and absolutely ignorant of the processes that our consumables undergo, never mind where they originate.
A woman who walks to get her grain supplies, employs a mano and metate to grind it, hauls the water to add to it to form flatbread, cooks it on a flat scrap iron heated by gathered sticks, twigs and dried dung has much more respect for life than the most aesthetically living North American woman. And guess what, she does it without labels of "natural", "organic" or "sustainable. G

The real challenge, it seems to me, is to balance modernity with reason, which gets harder as we go along. I'm an admitted Luddite when it comes to most technologies, but I do have my weaknesses--in part because I work in a high-tech environment and can't be totally independent of digital tech and still be able to communicate with my students. On the other hand, as I'm fond of telling them, were an EMP to hit the earth and we were to lose all that stuff, I'd be quite happy to go on without it. That's actually what my book is about: living well, respectful of the earth, and without most of what we take for granted as "necessity" in the modern world.

Of course, keeping up with the Peak Oil conversations has made me realize that most of us are not well-suited for a radical readjustment of our ways. Sharon Astyk's notion of Adapting In Place requires community and space--something not everyone has. I've got a bit of space, but little community. So I might be able to grow some food, but not obtain water (time to dig a well?), and I doubt that I'd be able to grow enough to survive. I guess that's why my adjustments have to be small and incremental. Perhaps one day I can actually use that old metate in my back yard to grind some of the grain I might eventually get around to growing. Sigh.