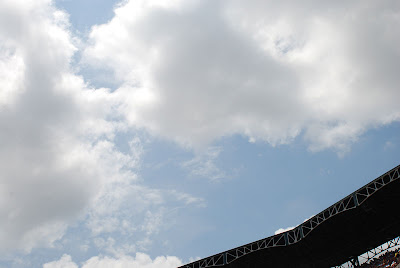 As anybody who reads this blog may already know, I am an unrepentant baseball fan. Absurdly enough, I'm a Cubs fan living in a town whose only team is not only not the Cubs, but is not even a National League club. In fact, my favorite American League team is the Angels, because they're the ones I used to skip seventh period PE in high school to go watch play in Anaheim.

But baseball lovers are an odd lot; we're so devoted to the game, that when we can't be with the one we love, we often love the one we're with. So it is with me and the Texas Rangers. Except when the Cubs are in town for inter-league play.

This is the second time I've been able to see the Cubs play in Arlington. I probably only went to three or four games the whole time I was living in Chicago, a block and a half from Wrigley (20 years ago), so two games in recent years isn't a bad average. What's great about watching the Cubs in the Ballpark (Texas has managed not to sell naming rights to the field, so it's just "Rangers' Ballpark") is that it's inevitably populated with almost equal numbers of Cubs and Rangers fans. 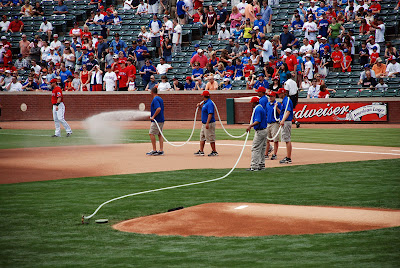 The best job in the world: being on the ground crew at a baseball park.
So when we went to a Sunday afternoon game a couple of weeks ago, with great seats close to the visitors' dugout, we were surrounded by fellow Cubbies fans who energetically announced that we'd "root, root, root for the Cub-bies" in the seventh-inning stretch. The beloved spouse wasn't all that impressed, being as he is a Pittsburgh fan and rooting for the Rangers, but I loved it. Talk of Chicago pizza and Wrigley and such just warmed my little cockles right up. 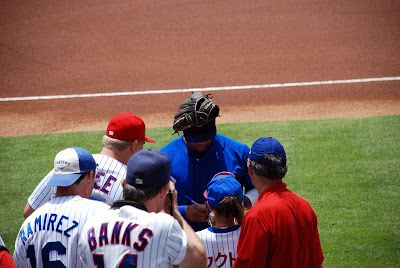 Marlon Bird, former Ranger, signing autographs before the game.
Not that they needed any warming. It was 90 something degrees, and the only way I kept from being fried was by wearing a big straw hat and a long-sleeved shirt. Not to mention occasional clouds to relieve us from the sun that beat down on us for the entire game (see the opening shot).

For me the afternoon provided balm for the troubled soul. Baseball, because it's its own universe, offers a kind of momentary utopia--a no-place suspended in time where one can enjoy the precision, excitement, and even the goof-ups that happen on the field. The rest of the world doesn't matter, at least for as long as the game lasts. Technically, it could last forever, but I'll take what I can get. For nine innings I forgot about oil spills and climate change and the decline of education in America.

And the Cubs won.

Happy Skywatch Friday, folks. Thanks to the SWF team for their work, and enjoy the weekend.
Posted by Owlfarmer at 6:49 AM

Sounds like you enjoyed the distraction from the cares of the world.
I never did get into the world of baseball. Though he had been a stringer for the LA times, reporting on sports at Hollywood High, my dad disliked team sports. He shared with me his love of the mountains, instead.

Well, I've always seen an affinity between mountains and baseball. Not sure exactly why, except for the striving metaphors, and all the stuff about time. For those of us out on the prairie, the only way we get that stuff is from baseball.

We can all use the balm for the troubled soul, that's for sure! And I guess it really doesn't matter what in particular serves as our balm as long as it works! Great post and great shots for Sky Watch! Hope you have a great weekend! Enjoy!

Congrats on the Cubbies win Candice.

I love baseball too, being an umpire for twenty years really gave me a love for , what I consider, the thinking man's game.

I know it's very subtle and many people don't understand it but the game will take you away from all your worries and frustrations for at least nine innings.

You've got some great shots of the game here and I like your sky shot too!

i'd like to see a real baseball game in the future. have only watched them on TV. You are right though, baseball or any sports have their own world and they can help in forgetting the worries of the world.

My skywatch is here.

My mom is actually a huge baseball (and football) fan. I always have to ask her what the rules are when I'm watching games! And I love what you say about baseball being a temporary Utopia. I think that's why people love sports!

That's a nice sky keeping watch over the game! I'm not a big baseball fan, but I admire those who do get so passionate about it! Thanks for your nice comment on my SWF post. Enjoy the day.

Looks like a perfect day to enjoy the game...