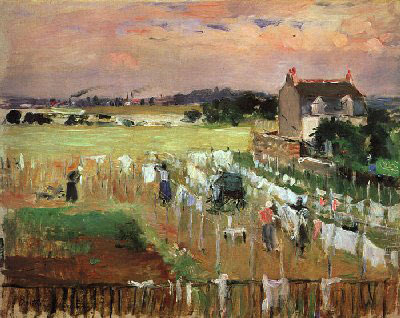 As I look out into my back garden, at the leaf-covered yard, and sheets hanging on the line, I'm musing about the changed character of holidays in our household. The weather is uncharacteristically (for this time of year) fine, after a brief morning shower that barely dampened the laundry (which has been hanging there since Saturday, sort of on purpose because leaving it overnight softens and "irons" bed linens better than anything one could add to the washer or dryer; I just forgot to take it in yesterday, so it got another night of airing). My long Thanksgiving break is coming to a close, and there are three more rather hectic weeks before the quarter's finished and a slightly longer winter break begins.

It occurred to me that over the last couple of years two new traditions have arisen for the Beloved Spouse and me. The first I've mentioned--the change of venue for the Thanksgiving meal from our house to our daughter's loft. The second, however, is probably more meaningful in the end: our refusal to participate in "Black Friday," which has become an emblem of corporate control over modern lives, and of the meaningless greed for stuff (and more stuff) that seems to have penetrated into the very being of American life.

The news yesterday was full of stories about how the economy seems to be turning around at least slightly, because so many people were apparently hopeful enough (or solvent enough) to go out and spend themselves into a frenzy after stuffing themselves with turkey. Some even seem to have foregone the feast in order to feed their desire for--what? Big screen TVs, elaborate and kitschy plastic toys, trendy clothing, digital gizmos of all varieties . . . and the list goes on. And on.

The stories were illustrated by footage of people standing in long lines overnight, and/or rushing through doors at ungodly hours to grab the "great deals." More videos followed of people standing in endless lines with shopping carts stuffed and piled high with goods (just what is "good" about "goods," I now wonder). Families, according to the Daily Poop, have made their own new traditions: shopping together. But stories of fights in malls and shopper stampedes indicated that not all of this was simply a pleasant way to spend time together after a good meal.

One good thing about living in the Bible Belt is that Sundays are pretty good days to shop, especially before church lets out. So the BS and I finally braved the crowds--which turned out to be sparse--and went out for several hours yesterday. We stopped in at Half Price Books and then had a long lunch at a sports bar (all the better to watch the finals of ATP tennis), picked up some small stuff at several stores in the "Villages" (a newish local outdoor mall that straddles the road between two adjacent towns; the one dud was a visit to the newly opened "a Real Bookstore," which turned out to be nothing of the sort), and ended our trip at Whole Foods. This was, after all, a milk run for the most part. But, including lunch and a late-birthday set of Deadwood for the BS, the whole thing set us back very little--especially since we hadn't done anything like this in months.

I've realized over these last few years of trying to live more thoughtfully, frugally, and responsibly, that small pleasures are fairly easy to come by. Meals based on pastured meat, humanely-treated cows and chickens, and well-raised plants don't even have to taste better (although they generally do, in part because I think more about how to cook them) to feel better. Spending more on food than on non-essentials means that farmers are getting more of what I pay for what I get. At some point in the near future, I'm going to write about the high cost of cheap food, but in the meantime I'm trying to plan meals and purchases ever more carefully so that I can afford to spend what they're worth.

Many people, I know, are in no position to be making these choices, because they don't have the time or the income or the opportunity; but I do, and so I can't ignore the consequences of what and how I buy. I've learned to do without a great deal, and I could certainly do without much of what I still buy. But I haven't yet reached the point at which I can live happily without my computer, the DVD library, the occasional new book or download to the iPad.

The balance between need and desire around here is still tenuous. At least, however, shopping is no longer an arbitrary activity, undertaken for its own sake. I've learned to postpone purchasing anything new until I've had time to think about its impact. I avoid going out to shop at all unless I can combine trips, and make sure I've got the cash for it; credit cards are reserved for dire emergencies (usually pet-related). The immediate result of these strategies, oddly enough, is increased enjoyment and appreciation for what the object (such as the aforementioned iPad) adds to our lives: the ability to read the New York Times on the exercise bike, or a digital edition of a magazine that doesn't have to be recycled.

A better man than I would probably think me frivolous for even desiring a new toy like this; and I'm likely to agree with him. But as the Beloved Spouse pointed out to me yesterday, while we were reflecting on our shopping trip, these are our small means of escape from an increasingly heavy burden: educating young people who have grown up in a culture that values entertainment more than intellect, instant gratification more than curiosity, and quantity over quality.

We have miles to go before we sleep. And so while I am always eager to rant away about the profusion of things that seem to preoccupy most lives, I do try not to feel smug about my sources of delight. Nevertheless, I can't help but feel good about the fact that I get at least as much pleasure from smelling my freshly folded, line-dried sheets as I do from reading the Times Magazine on the little digital reader we mulled over buying.

In truth, we would have bought it on the spot had it been available, rather than waiting the week or so before they were in stock at the local Buy More. My examination of technology and necessity will, therefore, have to remain a work in progress.

Image credit: Berthe Morisot, Hanging the Laundry out to Dry, 1875. Wikimedia Commons.
Posted by Owlfarmer at 8:53 AM

There's no way I'd venture out on Black Friday. Even more so now that it has become this new ritual for we Americans.

I'm hardly breaking new ground when I say that the holidays are more consumer-driven than ever.

We did not shop that weekend, but we did take a fine ten mile hike.
It cost nothing, but we'll remember it for a long time!

I did NOT venture out Black Friday and haven't for years! First, I HATE malls. Second, I HATE crowds. Instead, I took a long walk out in the desert!