While doing research on the effects of EMPs (electromagnetic pulses) on Life As We Know It for a short story this week, I kept coming across comments about how we'd be jerked back to 5000 BCE were one of these events to knock out electricity.

EMP survival is a staple on the armageddon/end-times/survivalist websites and blogs, and it's really the only potential catastrophe I worry about because there is some real possibility that it could happen--whether as a result of a terrorist explosion of a nuke over the US or in space, or as an effect of an especially large solar coronal ejection (CME), as occurred in 1859 (now referred to as the Carrington Event). I've been getting quite a lot of CME chatter in my mailbox from science news feeds, so this stuff is on my mind.

I won't go into the details, because the dangers are nicely outlined in the Report of the Commission to Assess the Threat to the United States from Electromagnetic Pulse (EMP) Attack. But I do want to consider the claim that modern civilization would come to a screeching halt, and we'd be consigned to neolithic lifeways (I refuse to say "lifestyles" in contexts like these--because of the element of choice implicit in our current use of the word) if we were to suddenly lose access to electricity.

In the first place, the real danger is to solid state electronics and all the fancy computer devices (like the laptop I'm using to write this post, and the internet I'm using to publish it) that rely on sophisticated infrastructural and telecommunications technologies upon which the United States and other first-world countries have come to depend. As the report points out, less well-developed countries are potentially in much less danger of collapse than we are:

"Our vulnerability is increasing daily as our use of and dependence on electronics continues to grow. The impact of EMP is asymmetric in relation to potential protagonists who are not as dependent on modern electronics." (Report of the Commission, 5)

In fact, simple electrical devices would still work--or could easily be developed--but almost everything we do these days depends on more complex systems. Most doomsday scenarios follow similar assumptions about how we'd end up in the aftermath of an EMP: cultural collapse, mass rioting and mayhem, takeover by one militia or another (foreign or domestic), rampant chaos, and eventually we'd be consigned to small pockets of "good" survivors at the mercy of "evil" ones.

Really? Good, helpful neighborly folk will turn on one another, co-operation wouldn't even be considered, the gun-toters would rise triumphant and ascendant, and shoot all the tree-hugging liberals and/or rape all their women folk and steal all their stuff.

To me this all amounts to a pretty dismal view of human nature (not that I really think there is any such thing). I can sort of understand the Apocalyptos who think the end is near and that god's going to rain tribulation down on all us non-believers (and on those who don't truly believe in their hearts according to one website I'm not going to link), smite us with hellfire and brimstone, set loose the beasts to devour us and all that. I mean, these folks rely on their literal interpretation of the most metaphorical text in the literary pantheon (fortunate choice of word, that), and they've been waiting for something like this since Jesus died, so they're actually looking forward to it.

But the rest of us? Wouldn't we be able to band together and sort things out? In the worst of times, don't we tend to work together--even when our government drops the ball (as with Hurricane Katrina)? And without electricity?

It's no coincidence that in my own view of utopia the occupants choose not to use electrical devices--and they get along fine without them. Of course, they've planned their lives around the complete absence of electricity (it's the first thing they decide they don't need), but they end up living pretty well, and with technologies that surpass those of the neolithic to some significant degree. Bronze Age, maybe, but not neolithic. In truth, there are degrees of technological sophistication that don't require any electricity at all, such as steam power. Just remember how much fun people are having with Steampunk these days.

Today's edition of the Daily Poop, in the "Lifestyles" section, there's an article by Alison Miller called Recovering Lost Arts: Brazos de Dios carefully crafts cheese, furniture, community--and a way of life. This is another reason why I still read the newspaper, and why I so enjoy coincidence. Just last weekend, as we drove south on I 35 to San Antonio, I noticed for the first time ever (after twenty years of making this drive) a sign for a town called "Elm Mott." I joked about how British it sounded, and wondered why I'd never seen it before--and then here it is: the very spot where Brazos de Dios is located.

The subject of the article consists of a community of about a thousand people on five hundred or so acres who "place great value in traditional craftsmanship, doing things by hand, and gathering ingredients from the earth and animals that surround them" (Miller E1). Begun in the seventies (like so many other intentional communities, only a few of which still exist) by a group of New York Christians, they now operate as Homestead Heritage and provide educational programs in crafts from cheese-making to boat building to letterpress printing. Their beautifully designed website offers this evocation of ideals that William Morris would have loved: "Our Traditional Crafts Village showcases a community of craftsmen who have returned, not to the past, but to the enduring values exemplified in handcraftsmanship. True craft requires more than skill: it expresses the craftsmen's care and concern, their personal investment in everything they do."

Now, I know that places like these are relatively scarce, although I'm going to spend some time finding more of them (before I lose the use of my electrical devices), because this kind of effort gives me hope for the future. I've been laboring under the illusion that my views of the good life are alien to most Texans (hence my continuing sense of exile). It's good to know that I'm wrong, at least to some extent.

It's also good to know that I'm right about the attractiveness of simple technologies. The folks at Brazos de Dios use electricity. But I don't imagine for one minute that they couldn't carry on just fine without it.

If, of course, they could also manage to keep the zombies and whackos from invading their farmstead in the event of an EMP.

Image credit: The Aurora Borealis, or Northern Lights, shines above Bear Lake, U.S. Air Force photo by Senior Airman Joshua Strang, taken at Eielson Air Force Base, Alaska in 2005. It was the Wikimedia Commons Featured Picture of the Year in 2006. The photo has been manipulated a bit, but the original is posted on the commons. For an artistic interpretation, see the painting by Frederic Edwin Church, below, from 1865--also from Wikimedia Commons. Some really good photos and videos of solar activity in general are available from the Telegraph (UK) page on solar flares, coronal mass ejections, and aurora borealis in pictures. 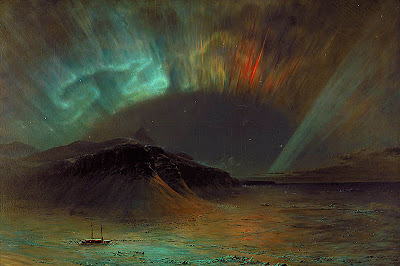 Posted by Owlfarmer at 9:55 AM

Speaking of coincidences, I found this gallery not but ten minutes after reading this. http://www.menzelphoto.com/galleries/

A couple of things come to mind. First, after the Northridge earthquake in '94, people came out of their homes to share whatever they had to assist their neighbors.
Second, I have been thinking how much better for our society if we would purchase fewer items made by craftsmen instead of the mass produced goods that are so cheap that we quickly discard them.

My husband came from Pennsylvania (near Lake Erie) and the Amish don't have or use modern conveniences. They use draft horses to plow their fields (have you SEEN their crops?), use candles to light there homes, and do NOT have the Internet! Imagine that! We've even looked at some of their farms as possible retirement places (unfortunately, we both LOVE our laptops!)...and their homes would have to be rewired, or NOT! We finally decided that I'd NEVER be able to put up with the winters, so we are now focusing on Nevada or Arizona.