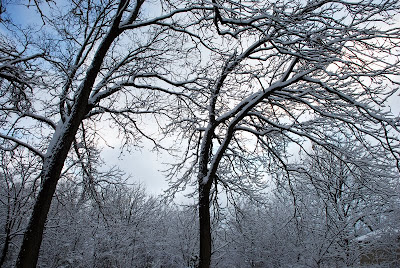 When the Beloved Spouse and I awoke last Sunday morning, it was rainy and dreary. But the puppies were strangely eager to be let out, and persistently (and repeatedly) begged to be released from house arrest, only to return immediately as soon as they were exposed to the rain. We kept trying to ignore them after that, busy at our Sunday paper, until shortly before noon when they practically started a revolution, demanding to go out. We'd kept the curtains shut to keep out the cold, so we couldn't see what was happening. By the time we acquiesced, however, the landscape had been completely transformed by a couple of inches of snow. 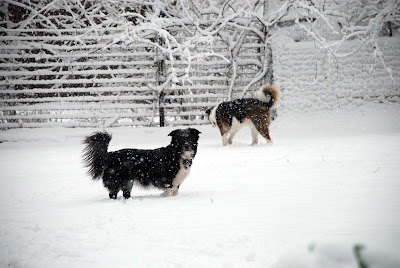 Now, these dogs have always been particularly fond of snow, having been exposed to it almost immediately after being adopted seven years ago. We got them on a Tuesday in February, and on that Friday it snowed a good five inches, so that they had to plow their way through drifts taller than they were (at three months old). Ever since, they've loved frolicking about in it, the deeper, the better.

Most of the area got an inch or two this time, but because we're further north we ended up with about five inches total, and it's persisted for several days. The weather's been cold enough that we've been putting out suet cakes for the birds, along with the usual feeders, and one intrepid little woodpecker kept returning to get his share, even though he had to peck through the snow. 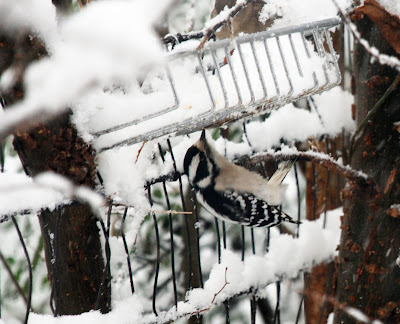 On Monday the skies cleared, but it didn't warm up enough for the snow to melt. The contrast between the white on the tree trunks and branches against the bright blue sky just begged to be photographed. 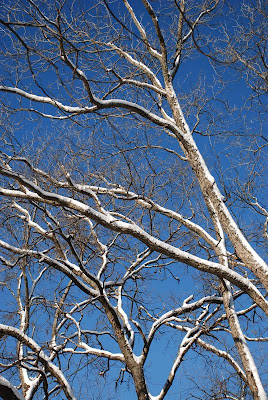 Serious melting didn't start until yesterday, so I took this as I was leaving for work--knowing that by the time I got back the icicles would be gone. 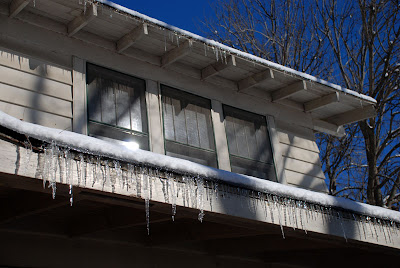 There's still a bit of the white stuff left on the ground and on tables and chairs about the yard. It looks rather like we could get more today, but our weather prognosticators (who were terribly wrong about how much snow there would be last weekend) say not. Since I've got a class tonight (old people with no lives are prime candidates to teach Friday night classes), I do hope they're right this time. There is positively nothing worse than a Texas driver in a snow storm, and I'd rather not have to deal with them at 10 pm.!

Happy Skywatch Friday, everyone, and have a great weekend.
Posted by Owlfarmer at 9:26 AM

I was in California when it was snowing out here, though I don't think Waco got any anyways. Looks like you got a beautiful snowstorm!

So very pretty but I do not think I could deal with the snow on any sort of regular basis!
We are having one of those warm spells right now I am almost embarrassed to relate when the rest of the country is so chilly. I am grateful for it though,we went to a couple antique shops today and although it was windy it was also 72 degrees.