Good News Amidst The Bad 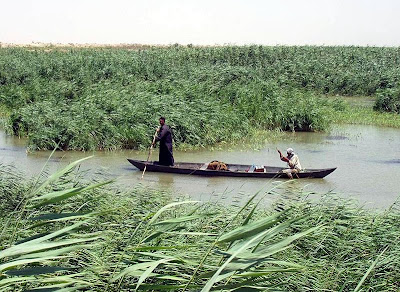 Since the benefits of urban life have begun to come to those of us in the hinterlands of north Texas, unexpected pleasures have emerged. The recent opening of a Whole Foods Market just to the south (and thus on the way home from school for both of us), has meant that the Beloved Spouse is now increasingly involved in home keeping--in that he's doing much of the grocery shopping because most of my classes are at night, and he gets off early enough for a foraging stop.

I used to be the one who succumbed to the magazines at the checkout counter, frequently picking up the latest issue of Cook's Illustrated despite my efforts to cut down on the number of magazines that litter our coffee table. But since he's the one tending to the shopping these days, the BS is the one who gets snagged by an interesting article. For the past two months, issues of the Utne Reader have shown up in the canvas bags that are supposed to contain food. I am thankful that he's not one of those husbands who gets seduced by improbable snacks or unnecessary goodies. But he does like his alternative press, and Utne's the best source of it.

So this morning, after I'd finished the Daily Poop, I settled down to read an article on the marshlands in Iraq, in the January/February issue featuring Marge Simpson as Rosie the Riveter on the cover.

My interest in the people referred to as the Marsh Arabs began back at Penn, when I took an archaeology class on Near Eastern prehistory, and then took a geology course that required a research paper on the interactions between people and their landscapes. The work I did then has stayed with me because the people themselves were so interesting, and their way of life almost a model for sustainable living. The pictures in the Utne article are astonishing, considering what things had looked like after about 1991 (then a veritable desert where once had flourished the probable inspiration for the idea of the Garden of Eden).

The update includes scenes the likes of which I haven't encountered since I conducted my research back in the '70s--when the marshlands around the Shatt al-Arab (the river formed by the confluence of the Tigris and Euphrates rivers) had covered thousands of square kilometers: people pushing their boats around reed-filled marshes dotted with small islands of land on which the Maʻdān (as they are sometimes called in Arabic) build reed houses and raise livestock. 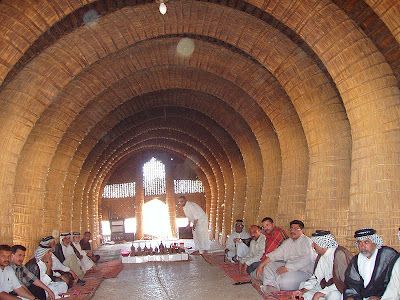 The interior of a Mudhif, a traditional reed-built guest house.
By the time I wrote my paper, the life of the Marsh Arabs was already at risk, due to expanding irrigation to the north, and because of increasing political conflict among Muslim factions in Iraq, and growing tensions with Iran. For an account of what happened next, see this article from Human Rights Watch, documenting Saddam Hussein's program to to punish the population in the south for supporting a Shiite uprising by draining the marshes and destroying the local culture.

The good news is that the marshes are beginning to recover, and their champion, Iraqi American Azzam Alwash, is optimistic about its future--even though potential problems still lurk: Turkey's erection of dams at the sources of the Tigris and Euphrates, as well as continuing political instability in the region.

The fact, however, that the marshes are recovering at all gives me some hope that wetland restoration in other areas, including the Everglades in Florida, and the lower Owens River Valley, might succeed more rapidly than one once might have hoped.

For folks interested in pursuing this topic, there are two good articles available from the Penn Museum of Archaeology and Anthropology (from the Museum journal, Expedition). One is from the fall of 1962, E. A. Speiser's piece on the connection between the area and descriptions of Eden in Genesis (perhaps of particular relevance to my Technology and Utopia students), and a more recent (but before Saddam's devastation project had taken its highest toll) essay about "Life on the Edge of the Marshes" by Edward Ochsenschlager (1998), which focuses on connections with the ancient Mesopotamian past. For good historical photos, see the archive of Wilfred Thesiger's evocative photographs at the Pitt Rivers Museum of Oxford University. The Google image pages for "Marsh Arabs" is chockablock with rather lovely pictures from all kinds of sources.

The update in Utne Reader, "Birds Not Bombs," by Samiha Shafy for Der Spiegel, is a welcome bit of news--even if the situation is still fraught with danger.

Image credits: Both photos are from the U.S. Army Corps of Engineers Digital Visual Library, via Wikimedia Commons.
Posted by Owlfarmer at 11:15 AM