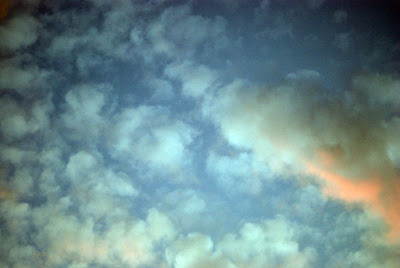 Before last week's snow, we were treated to a couple of dramatic sunsets, but here in treeland it's hard to capture them; I have to run down the alley next to our house and shoot over the houses on the next block, to get clear of trees and power lines.

I did manage to catch an odd moment of orangey light on the clouds overhead, but by the time I got things more or less focused (I had the telephoto lens on without realizing it), most of the glory was over. 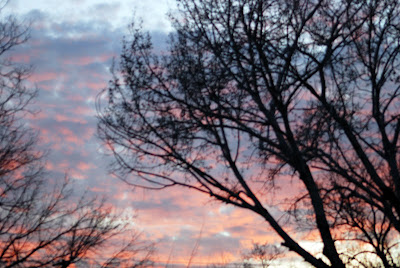 It's been a long week, but rewarding in its own way. The Utopia class is a joy; the kids (and some not-so-kids) are lapping it up like kittens at fresh milk. I guess that since art students don't get much time to discuss ideas, they're really enjoying having a chance to show off their brain power. The discussion, about E. M. Forster's "The Machine Stops" and its similarity to life on today's social media (as well as connections with contemporary stories like Wall-E) was fodder for a rousing discussion. I'm looking forward to next week's response to Morris's News From Nowhere, which presents a rather stark contrast to Forster's nightmare future.

Connections these days seem to be fleeting and superficial most of the time. So it was good to share ideas with those who'll be living in whatever world we create over the next decade or so. But it was also reassuring to note that even the youngest members of the group were highly aware of the technological snares we're setting, and that there's some hope that we'll not end up in underground hives, deprived of everything but dim images of one another, and disembodied voices.

Last night I had a chance to get together with an old friend from Penn, who was in town for a physics conference. After playing phone- and e-mail tag (he's as much of a communications technology doofus as I am), we finally managed to spend a few hours reminiscing and catching up on news both good and bad. It wasn't nearly enough, and one realizes on occasions like these how precious friendships are ("Only connect," as Forster says in Howard's End), and--using the above photo as a metaphor--how little time left we have to nurture them at our age.

We've promised to keep in closer touch, though, even though he and his family all live on the East coast--and its the very technology of which I'm frequently so critical that makes that connection possible (but no, we don't need Facebook to do it). The best thing about old friendships is that re-connection is its own reward, and it opens up new paths of memory: new stories shared, new joys and sorrows. Our children are all grown and embarking on their own lives, with weddings and perhaps grandchildren still to come. It's enough to gladden even the most mechanical of hearts.
Posted by Owlfarmer at 6:27 AM

I like your beautiful skies. Shame about the miserable neighbour but he hasn't tempered your optimism.
It's encouraging to discover that younger folks are aware and appreciative of the world we live in and are keen to express their ideas. It's also good to catch up with old friends - time passes so quickly.

Beautiful sunset pictures! And interesting class it sounds like! My husbands a tech geek, so we discuss where technology is taking us often.

The pictures I put up this week were from the San Bernardino Mountains, driving down aptly named Rim of the World Highway. I spent my teen years in those mountains and they'll always be home to me in a way...though where I am now is home too. :-)

Wowza...impressive cloud post this skywatch Friday! I appreciate all the effort you made to get this shot.
Joyce M

Beautiful shots - sorry you had to put up with rudeness to get them!!

I love the first shot best. Your story reminds me of a trip we took on the ferry from our town across the strait to Vancouver Island. I am always taking picture and have my camera out and handy. Another passenger in the next car struck up a conversation and wanted to know where we were from. When we said Powell River (the departure point for the trip) he looked shocked. Why would a local be taking so many pictures on a mundane ferry trip. But you never know when and where you will catch that perfect shot. - Margy

You have to wonder about people these days! But I can see why you ran out and braved the neighbours! Happy SWF.

Beautiful sunset! Phooey on the neighbor who is so cranky, I might have replied "What are YOU hiding?" and been in a lot of trouble!
I just met our new neighbors today , I should warn them how strange we seem, I think they must have noticed by now...
Glad you are in touch with an old friend too, those are the best kind. Mine now lives in PA and email is our communication choice,it works out fine.