Coming of Age in the Multiverse 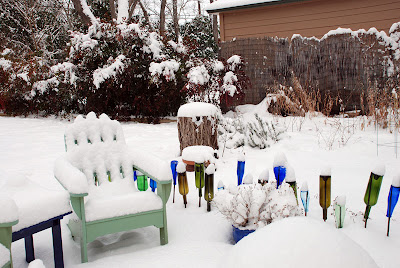 I wrote this on Friday, but didn't get around to posting it until today.

No good comes of being cooped up for days in a location not prepared for real winter. One doesn't go out of doors, except, briefly, to admire the beauty of the new snowfall or just enjoy the quiet. The former (not going out) stems from the general lack of "native" driving ability, the latter from the relative lack of actual driving going on. We're about a mile from the freeway, but can--on a normal day--hear the constant traffic buzz as a soundtrack for our lives, especially in treeless winter. But few are venturing out, and the streets are much quieter than usual in part because the fluffy lovely snowy stuff is acting as a sound baffle.

Instead of doing anything truly useful (like house-tending--hoovering and dusting mainly, since we can't wash clothes when the temperature's this low, 23 F at the moment, because the washer is out on the unheated back porch), I've been tucked up under the furry throw rug I bought for the cat (who's terrified of it) when his brothers died, thinking that it would be nice for him to snuggle into. It suits me fine, though, even though it's synthetic. I'm utterly amazed at how lifelike the "fur" is, and only need to feel guilty about the plastics that went into making it, rather than the deaths of small furry critters. It's quite warm, too, which helps mitigate the low ambient temperature in the house, despite our pumping more natural gas-heated air into the place than I'd like so the interior pipes don't freeze.

We've run out of dry firewood, but I'm still in the living room, in the comfy chair, laptop on lap, reading away (at the preview of Sunday's Times Book Review mainly, and other odd bits). What I'm reading is pretty discouraging: a review of a new book about the imminence of serious climate problems, and Mark Bittman's piece about American food. Even a review of Brian Greene's new book, The Hidden Reality (about parallel universes and such) hasn't lifted my spirits as much as it might normally, because the other two are so very discouraging.

The first of these, Hot: Living Through the Next Fifty Years on Earth, by Mark Hertsgaard (reviewed in the Times by Wen Stephenson), reminds me, once again, of why I'm glad I don't have grandchildren. The same forces that are churning up record floods and cyclones in Queensland, and record ice, snow, and sub-freezing temperatures across the Midwest in this country are evidence of the need to make significant changes in policy and practice by 2020 in order to forestall utter disaster. The prologue is available on Google Books, and what makes it so compelling is that Hertsgaard is the father of a young daughter--one who, like so many of our children and grandchildren, will have to live in this over-heated, climatically disturbed, drought-stricken, disease-infested world full of poor people who have no chance to change things either because they don't understand what's going on or they've been convinced that global warming is a political conspiracy devised by "liberal" scientists and fostered by left-wing politicians for their own nefarious reasons.

Of course, the doomsayers have been wrong before (notably Paul Erlich, whose prediction of a Population Bomb fizzled as birth rates fell in response to the fear--and to the growing number of people entering the middle class from the '70s on--but see his rejoinder at the end of the Wikipedia article on his book.), but regardless of the art of prognostication's record I'm just not particularly sanguine about the future because so many variables are now in play.

Not unrelated to the climate problem is the list of changes in food policy this country needs to make, itemized by Mark Bittman in this week's Opinionator column: A Food Manifesto for the Future. I'm already an unabashed Bittman fan, and this simple list of real solutions confirms my reasons for adulation. Unfortunately, he too is preaching to this particular choir member, and I doubt that many of those who think we ought not to interfere with parents' choices regarding their children's nutrition, or that we ought to keep government regulation to an absolute minimum, are going to be hopping fervently onto this bandwagon.

You'd think that some might, though--embracing at least a couple of the points (like ending government subsidies on processed food, potentially saving at least $16 billion, which would pay for some of his other ideas, like subsidizing small farmers instead of large ones, or establishing a "Civilian Cooking Corps" to help educate families on good nutrition and the benefits of cooking for themselves). He promises further columns to elaborate on each point, and I for one can't wait. It's too bad that many around here would see these provisions as market-meddling or nanny statist propaganda, because Texas could really use some sensible political action to help make up for the various absurdities coming out of Austin at the moment, like firing teachers and slashing Medicaid when we're already near the bottom of the educational barrel and have rejected "Obamacare" because of its "socialist" provisions.

About the only hope I have these days--and it's only a fancy, not really a hope--is that somebody will discover a key into another dimension, where (like the characters in More News From Nowhere) those of us who think it's a good idea to move toward solving problems rather than pretending they don't exist, could start afresh. It would be good to be able to create a world in which technological and economic "progress" weren't the only measure of human accomplishment--and where our ability to live rewarding lives (using measures other than the amount of stuff we can accumulate before we die) without destroying the planet in the process could be realized.

The possibilities of multiverses also arose because I read Timothy Ferris's review of a new book about dimensional physics, The Hidden Reality: Parallel Universes and the Deep Laws of the Cosmos, by Brian Greene. Current concepts like string theory and hyperdimensional sheets are like popcorn to me--nutritious and addictive, but I don't really know how they work. Nevertheless these ideas are fodder for the imagination, especially for those of us who have run out of ways of doing much to help out except to rant about problems on our blogs.

It's usually easier for me to be more hopeful when the byproducts of human existence are buried in several inches of snow, so that everything looks clean and fresh (as in the opening photo). The peace and quiet will, however, last only until tomorrow, when it's all expected to melt away. The region will be aflood with football fans spending absurd amounts of money, contributing significantly to local air pollution levels (increased flights in and out, traffic to and from the stadium, and considerable amounts of media hot air). The sheer excess recorded in this week's issues of the Daily Poop indicates that if all this money were put in a pool to use otherwise, we might well be able to address some of the issues reported so eloquently in Hertsgaard's book and Bittman's manifesto.

Instead, the Super Bowl becomes its own metaphor--a symbol of all that's wrong with us: bad food choices, billions spent on unneeded crap, over-paid sports stars, inane celebrities celebrated for their own excesses, a preposterous stadium, itself a monument to the vanity of a man who also symbolizes over-indulgence and questionable judgment. Some folks get rich off of this stuff, some live vicariously through it, and some of us--those who'd enjoy a good rivalry more without all the pomp and silliness--just end up feeling guilty for even wanting to watch the game.

Well, Go Steelers. Anyway.
Posted by Owlfarmer at 9:15 AM

During the sermon at our church yesterday, the pastor pointed out that the 3 million dollars it costs for one Super Bowl commercial could meeting our church's expenses for 5 years.

It's hard not to be pessimistic about our future when faced with facts like that and the ones you cite.

Thanks for stopping by, David--and for leading me back to your blogs, especially the Groucho Marx one. I hadn't visited in a while, and was just thinking about it the other day because our last remaining cat (most of whom had been named after comedians) is Harpo. It's also good to know that I'm not just spouting into the wilderness; good on your preacher fella for pointing out one of many apt comparisons.

How can you survive in Texas with your reasonable mind? Okay, perhaps I'm just prejudiced... I read a lot here that gets my complete agreement. But you are from CA if I got that right from your comment on my blog? I'll be back, that's for sure.