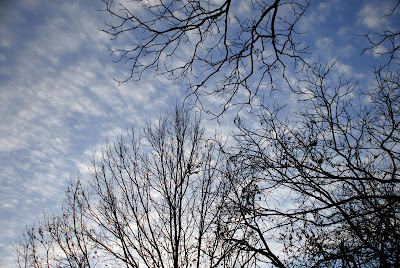 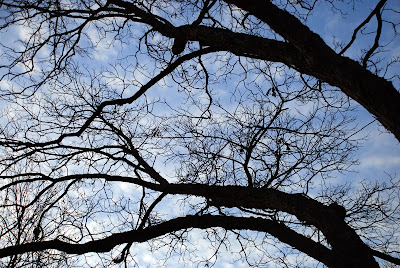 The Daily Poop said yesterday that the winter of 1983 was colder than this one--or at least that spoiled North Texans suffered some 295 continuous hours of sub-freezing temperatures that December (we're hovering around 100 hours at the moment). That particular December has been squeezed out of my little memory cells, but I probably will remember this last week, if only because of the fuss folks have made over it. Part of the concern has to do with the impending Super Bowl game on Sunday, but mostly it's because this part of the country is full of weather sissies.

I awoke Tuesday morning to a phone call from my boss, telling me that the school had been closed down for the day. Well done, considering the fact that SUVs, pickup trucks, and 18-wheelers were sliding into one another all over the Metroplex for the next two days. So school was canceled again on Wednesday--and the Beloved Spouse's campus was closed again on Thursday (I had to meet class, with only 8 out of 30 attending). They were planning for tennis practice today (although this weekend's tournaments have been abandoned), but we'll see about that. I have my doubts about the ability of Texans, Argentinians, South Africans, Fijians, and Australians to whack balls around in freezing weather. Especially with snow all over the courts. It won't be as cold today as it was yesterday (20 was the high; it's 18 and climbing at the moment, with four inches of lovely white stuff on the ground) but things aren't expected to thaw until Saturday.

When we lived in Chicago, nobody blinked an eye during snow and ice (although this week's storm has caused the public schools to shut down for the first time in several years), and you would never see people going out in thin jumpers and jackets--they'd be bundled up appropriately. But one woman on the local news was complaining about how cold her house was (60 degrees; ours doesn't get up to 60 degrees in weather like this!), and she was sitting around in a tee shirt. Meanwhile, the BS and I are layered in fleece hoodies, sweaters, and extra socks--enjoying a morning sit in front of the fire. The puppies, deprived of long forays out of doors yesterday because of the wind chill (and Woody had already started shedding from last week's warmth), spent the day lounging on the sofa. This morning they've already been out for one romp in the snow, and will be begging for more as soon as they've slept this one off.

A couple of new suet cakes are in the feeders for the birds (an intrepid and inexhaustible brown thrasher, a pair of downy woodpeckers, assorted cardinals, chickadees, titmice, a starling, an olive sparrow, numerous English sparrows--and this morning a pair of fox sparrows), and the new hanging feeder is stocked with sunflower kernels, so the birds are happy, too.

Colleagues will undoubtedly be snarking next week about the "fallacy" of global warming, and I'll have to remind the climate-illiterate about last week's unseasonable heat, suggesting (icily, perhaps, ) that they might want to take a course in glacial processes or climatology in order to understand the relationship. I doubt, however, that it'll do much good. One thing I'm learning about modern "politics" is that folks are not going to listen to reason if they've already made up their minds--no matter how good one's argument or how solid contrary evidence is.

The photos were taken Wednesday morning (Groundhog Day, and the 90th anniversary of my late father's birth), when the temperature was at about 10 degrees F. Alas, the camera battery is busy charging at the moment, so no update featuring snow-laden trees. But here's one I took a few weeks ago after our last "blizzard." 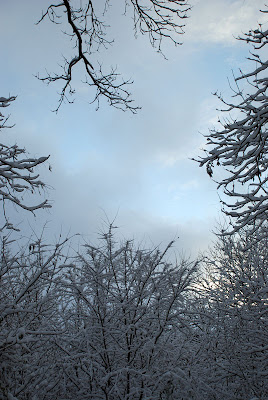 Happy Skywatch Friday--and have a cozy weekend. Go Steelers!
Posted by Owlfarmer at 6:36 AM

I heard yesterday that parts of Texas were colder than the arctic! And yes we are the same across the border, what a mess, but your pics are pretty!

Love the shots of the sky up through the trees...good Job !!