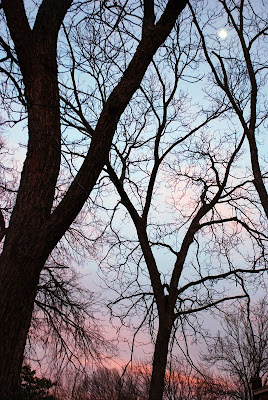 Deep winter now feels like spring, and our recent spate of very cold weather makes the current respite all the more pleasurable. It's 64 F now, with a light rain, and the weekend temperature is expected to reach the high 70s. The cold-weather cleanup has begun in earnest.

Our eight-year-old chest freezer went to its eternal rest (it was in an unheated shed), so we went shopping last Sunday for a small (12.1 cu. ft.) upright that's now in the laundry room on the back porch. We want to be able to stock up on pastured meat when the farmers markets reopen, and this one's half again as big as the old one. It does block part of a window, but we moved a bookshelf in front of another window--which will allow me to spy less obtrusively on birds bathing just outside. Yesterday I caught a flock of cedar waxwings having a grand old time splashing out all the water, but had to shoot through the window and the screen in front of my desk. 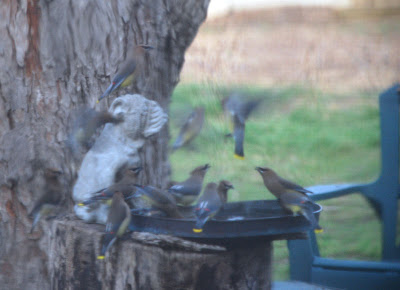 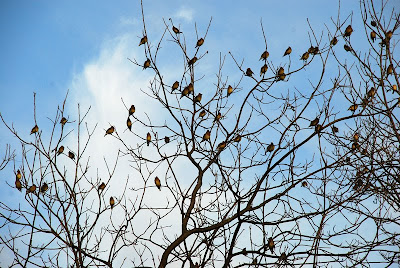 I can't refill the birdbath with the hose yet, because the cold also did a number on the water line. Beloved Spouse came home one day to a spraying fountain behind the washer, and had to spend a fair amount of time cleaning up the wet after he'd shut off the valve. Fortunately, the broken pipe seems to be just the one leading out, so we haven't had to stop doing laundry. Our favorite plumber will be called in soon to check out the lines under the house and to effect repairs as necessary. I'm particularly fond of these folks because they do one of the dirtiest jobs there is, but they do it efficiently and with good humor. I've never understood why people complain about how much it costs to have that sort of work done, when none of them would be willing to do it themselves, even if they knew how.

The plumbing issue is rather timely, actually, because we're about to start talking about poop in my utopia class. I was inspired to include the discussion by an article in the Penn Gazette last month about this year's summer reading project for incoming freshmen, Rose George's The Big Necessity: The Unmentionable World of Human Waste and Why It Matters (Metropolitan Books, 2008).

Utopians, after all, seldom talk about the nasty bits associated with human life, so I made sure to include composting toilets in More News From Nowhere. But discussing these matters gets to the heart of issues that need to be addressed in the real world: use of water, treatment of waste, who has to take care of it all, etc. Excrement is also a dandy metaphor for all manner of human excess, as Ursula LeGuin uses it in her "ambiguous utopia," The Dispossessed.

The discussion in a couple of weeks should be interesting, and I'll probably have more to spout on the subject then. For now, however, I've sorted through the various winter sky shots I've managed to take over the last couple of weeks. These could be the last of the leafless-tree-against-the-sky photos I get until next winter, because the elm next door is already budding. Pear blossoms, pecan catkins, and wisteria blooms can't be far behind. 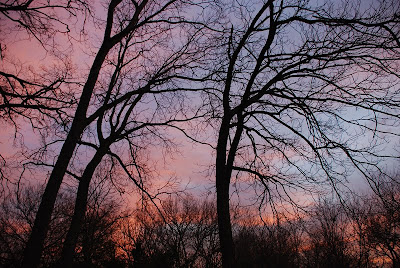 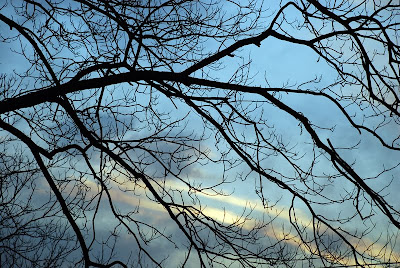 The opening shot gets the moon just before full. The other two are evening and morning images carefully framed to miss the ubiquitous power lines. Happy Skywatch Friday, all.
Posted by Owlfarmer at 7:07 AM

The disposal of human waste has always been an interesting subject, from the use of 'pure' in the tanning industry to 'night soil' as fertiliser in China.
I like your moon photo particularly. Your photo of the waxwings is much clearer than ours - the light was failing but we were so excited to see what we later realised were waxwings - a first for us!

I like your sky shots. And it looks like you have many birds with a shade of yellow. Love it!
Full Moon

Such elegant images.
That tree lends itself to being featured against those delicate skies.

Marvelous captures and a hope of spring!! Love the waxwings! Such beautifully colored skies! Hope you have a wonderful weekend! Enjoy!

Chasing the sun down

Absolutely beautiful shots, especially the last two ones. I love the cedar waxwings, such beautiful birds! And always in a huge flock.

Love your first shot...beautiful skies in your neck of the woods. Thanks for the visit!

I love the tree silhouettes against that gorgeous sky. The branches remind me of millions of tiny blood vessels! Thanks for your visit.