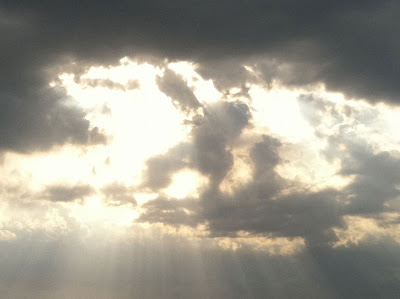 Not much time for posting today, so I thought I'd share the weather. Hot. Hot. More hot.

Mind you, it's still not as bad as 1980, when I had a one year-old and a four year-old and an old VW microbus with no air conditioning. So far it's only thirteen days of over-100 degree heat. 1980 gave us 39 consecutive scorchers.

So, things could always be worse.

The two photos are among the first I've taken with the enhanced capabilities of the iPhone 4. I took the opening shot in the CVS parking lot, and represents just about the last time we saw serious clouds around here.

The photo on the left was shot at the Ballpark when my daughter and her beau took us to a game a few weeks ago. It happened to be the one in which Dirk Nowitski threw out the first ball (pretty funny; it was a basketball), and I think that's why the helicopter was hovering. But the sky was just sky; no clouds at all, and it's been pretty much that way ever since.

Said daughter is in Maine this week, on an island, near the sea, soaking up the fresh air and cool temperatures (it was 70 when she landed yesterday).

It's funny to think that 70 is cool for some people. I don't envy you 100 degrees. A blazing blue sky gets boring after a while so I hope you see some (productive) clouds soon.

yeah, it's the cloudless skies and the heat that gets tiresome. a few clouds now and then, I'd be happy. we're in the midst of a heat wave here in the Midwest too. I hope you have a peaceful weekend. try to stay cool. and I look forward to your rants starting soon. :)

Ha! We have kids the same age. I have a son, soon to be visiting from NYC, who was born in 1976. I hope he enjoys the heat, because we are having plenty here, too!

Those clouds look like they're made of molten metal! Really gorgeous! I do wish they'd brought you rain, though. Hopefully soon!

Lucky daughter! We were in Acadia and Penobscot Bay in June of last year, and though we had some hot, muggy days, it was beautiful most of the time and always lovely by the water. I hope she bottles up some of that fresh, cool sea air and brings it home to you!

Beautiful, clear skies! Hope you get some relief from the heat soon.

I remember the summer of 1980. I was building and trying to operate natural gas processing plants int the Austin Chalk field near College Station. It was hard to get anything done with rolling brownouts.

I also remember 1980,hot here in So Cal too. I remember because I had a 4 month old daughter and a unpleasantly Yellow Toyota Corolla also with no A/C. Bob was driving a 1960 Ford F-100 at the time again,no A/C! We survived,going to Comic Con San Diego this week with that same now 31 year old daughter!

I sure do feel for you in Texas,No snark sent at all,friends from Corpus Christi to the Panhandle of Oklahoma are just miserable .
We have been lucky for the last week and a half or so with temps around 85-95 so that is why I have been out doing yard work in the middle of July!
Plus I have that ongoing war with the wasps!
I don't go out until around 6p.m.,the sun is low and I have to stop when the street lights come on,it is a long-standing Summer rule and who am I to mess with it?
Love your photos right out of the Iphone4, they really do a nice job !