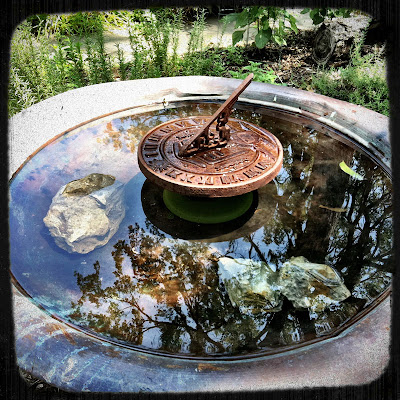 The photo is a bit of a cheat to make it work for Skywatch Friday (note the sky reflection), but it's also a fitting illustration of elements from earth to air to fire to water. The "birdbath" is actually a former copper fire pit, which was rendered useless as such when a huge branch from our neighbor's tree fell on it. But it makes a nifty spa for the feathered folk who visit my potager, and the sundial makes a nice launching pad for frolics. Earth is represented by the rocks (from a cairn of Sierra samples my father pinched from some hapless geologist's cache many years ago). The air and water symbolism is rather more obvious.

The coalescence of themes in blogs and life never ceases to amaze me. Here I am, sitting down to prepare this week's contribution to the Farm and to end my recent attempt at theme-blogging (The Elements Project). But during this week I've also been updating a course I teach on myth, and water--the element du jour--keeps showing up as I select new readings and augment the slide shows. Water is a pretty powerful metaphor, after all, and it's a basic component of stories about origins and creation. It's also a topic I've written about frequently on the Farm (Good News and Bad News in the Water Wars, among others), and it'll probably creep into future posts as well. If I'm repeating myself, think of this as an update.

I probably need not remind anyone that the sprawling southern Californian megalopolis we call Los Angeles owes its very existence to water that once flowed freely through the Owens River Valley. LA would have been much smaller had William Mulholland not purloined the rights to water flowing between the Inyos and the Sierras and built the aqueduct that enabled population growth to the south. The old adage "blood is thicker than water" was transformed into "blood is water" when it comes to making a huge city possible on land that could not otherwise have supported all the millions that now occupy the region.

There are, of course, many sides to this story, but I've lived with it for long enough to know that every time I travel home I see signs of increasing dessication, and for fifty years I've watched the joshua trees from the south marching up the valley, harbingers of encroaching desert. It's always been desert--but the oases are becoming fewer and farther between.

In fact, I love the desert. There's nothing like dry, granite sand, sagebrush, and creosote bush to make one really appreciate water in the first place. I even harbor a special fondness for the Los Angeles Aqueduct, which flows by the Cottonwood Power Plant where I spent summers and holidays until my grandfather died and my grandmother moved to town. The "Innapennants" (Firefly joke) in my family had harbored no long-term animosity toward the city of Los Angeles, and my grandfather worked for them for over twenty years until, as my uncle recently noted after a visit to the old plant, he "left feet first, as did the chief operator before him." My uncle also reported that the city had put up water meters next to the houses there--no more free water for anybody.

As I mentioned in the introduction to More News From Nowhere, the water situation in the Valley isn't all bad news--at least for the nostalgic few like me who are glad it didn't turn into one big long city on the way to Reno and Tahoe. The median income in the area is low, but there's work in the tourist industry, and a few ranchers and others make decent enough money to build half-million dollar houses up in the Alabamas (as I discovered in my romp through the properties-for-sale ads).

One of the more ironical aspects of valley life is that a fairly new employer has set up shop in Olancha, just south of Owens Lake: the Crystal Geyser water bottling people, who truck water pumped from underground snow-fed springs down to folks in LA who apparently don't like the taste of the river water.

As I've recently been reminded, the relationship between water and life shows up constantly in creation myths, and these stories have been around for as long as human beings have been around to tell them. Like fire, water has both its creative and destructive elements; although life comes from water, nearly every mythic system contains a flood story. When the gods don't get it right, they send a flood to wipe the slate clean so they can start all over again.

Every religion I've ever been involved in also uses water as a symbol of birth and rebirth. When I was six months old, I was baptized with water from the River Jordan (according to the certificate) in the First Congregational Church in Pasedena, California. In Japan, at age 7, I was re-baptized Catholic (my mother had converted some years earlier, and my brother had been baptized at birth), and then in my mid-twenties I got the Christian all washed off in a mikveh in Allentown Pennsylvania while three Orthodox rabbis waited politely behind a door to hear me say the blessing that made me Jewish.

Just a couple of weeks ago (in the Air post) I was grousing about how water has been responsible for the increased use of air conditioning by raising regional humidity, and lamenting our inability to use evaporative cooling instead of heat pumps around here. Thanks to my daily dose of Good, however, I'm now aware of a new technology that promises to reduce electric power use by 90%, and that uses a system descended from the old swamp cooler--and that "works well in both Gulf Coast humidity and desert heat." Systems like this could also make it easier to get off the grid, since (according to the Miller-McCune article), 14% of American electrical use goes to air conditioning.

As most of Texas continues to suffer drought ranging from severe to exceptional (except for our little area of north Texas where we've had enough rain this year to move us out of any category), the wild fires will continue to burn, and water shortages will make it harder to endure them. I feel a little guilty when I water the veggies, but try to make up for it by not taking showers when I don't have to go out in public. Only a year ago, I reported (in the above-mentioned post on water wars) that Texas as a whole was drought free for the first time in recent history.

If we don't get rain soon, we'll probably be nudged back toward the "abnormally dry" or "moderate" drought categories; but McKinney seems to have learned some hard lessons about water, and wise-use policies are now part of everyday life. Some fairly effective television ads from the Water IQ campaign have started appearing, too--with coins representing water, flowing, for example, into a storm drain. Even more evocative, I think, are the Save Water, Save Life ads that are showing up all over the world--one of which quotes Ben Franklin: "When the well's dry, we know the worth of water."

Lets hope that all those folks who're anxious to adhere to the tenets laid out by the Founding Fathers can be as frugal with their water use as they want to be with my tax money. The deficit that really endagers our children and grandchildren involves water, and I can't think of a better example of a public good than making sure we use what we have wisely.

Image notes: the photo was taken with the Camera+ app for my iPhone4. It doesn't quite make the smart phone into an SLR as it claims, but some of the features are very useful (zooming, for instance, and the cute borders). I'm really enjoying the higher resolution, which can be augmented even further by another app: 8.0 MPX Simulator.
Posted by Owlfarmer at 8:52 AM

Water, not a problem this year in California. I worry that folks will get out of the habit (if they were ever in it) of conserving. For now the rivers run full and the gates are open on the reservoirs as there is still much snow in the high country.

I don't think you're cheating at all. I think a reflection of the sky is perfectly legitimate for Skywatch--and perfectly lovely too!

PLANETS HURTLING THROUGH THE SKY

Planets hurtling through the sky,
Can you tell me one thing: Why
Are you intent on fleeing
Far from human sight and seeing?

We are going to have a cooler weekend, high 80s, hope your temps break soon too,triple digits are rough for that long.

Loved the "Innapennants" reference! I shall think of you when I venture out into the 'Verse at San Diego Comic Con and visit fellow Browncoats!
I go every year, my Daughter and her DH have a booth for October Toys and Toybreak.com . SDCC is in 2 weeks and we are all at top speed prepping for the week of the most fun work/most work of the year!
I really enjoy your blog,it is always thought provoking and makes me smile too!
Adios!

I recently finished a really nice book (historical novel) set in the California desert. The Lonesome Gods by Louis L'Amour. I never would have excpected him to be such a thoughtful author, but he really was!

The reflection does work! I like all of the different colors that are present in your picture.

I've never been so conscious of "the worth of water" since moving to the desert. I'm attracted to the sound and sight of it in any fountain, which is why we have a small homemade one out on our patio.

Interesting to read about that new technology. I could use something like that to replace our not-very-well-functioning swamp cooler, which is the center of many discussions in our household.

we've gone 13 days w/o any rainfall, and that's considered a long time here in the Midwest. living next to a Great Lake there is constant talk of diverting that basin to drought-stricken areas. not-so-fast we respond. interesting read as usual, and I LOVE the reflection photo. have a great weekend.