Rethinking What It Means to Be Poor 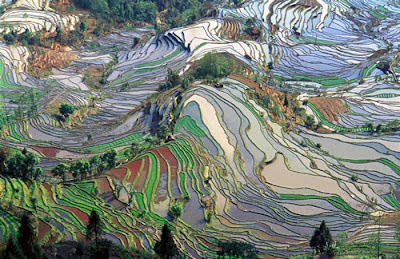 A couple of recent television and radio programs reminded me that I had long wondered why people who live off the land and produce everything they need to survive are thought of as “poor”—whether they are economically well off or not—by folks who live in industrialized communities.

I was listening to the local public radio station’s afternoon talk show on the way to work not long ago, and the featured guests were talking about living simply and about voluntary poverty. I didn’t catch the names, so I hit the search engines later to find out who was currently talking about this stuff. What I found, on voluntary poverty, at least, was that it was something I had been familiar with decades ago when I was at Penn and heavily involved in conversations about religion and justice. Many of my Catholic chums were deeply committed to a kind of neo-Franciscan effort to shed the trappings of material life in order to concentrate more fully on the spiritual. But there was a practical element to it, as well, that had to do with helping to relieve poverty in the inner city, because Penn is an urban university that was then bordered by near-slums occupied by starving grad students and the genuinely poor.

I was pleased to notice that the conversation is still going on. One blog, in particular, Katerina Ivanova’s Civilization of Love, seems to carry forward the concerns that many of my friends voiced back in the seventies. Plus ça change . . . The blog is not focused on voluntary poverty per se (although there are a number of posts devoted to it), but on the kind of peace I was taught about by my mother’s missionary friends in Taiwan, particularly Fr. Bernard Druetto, the parish priest on Quemoy during the shelling of the island by the mainland Chinese in the late ‘50s.

What becomes apparent, though, if you search through the web for articles on the topic of voluntary poverty, is that 1) it’s primarily a Catholic movement and 2) not a lot of poor people appear to be involved. So these days it seems to be more about reducing materialism, and is more akin to the “simple-living” phenomenon, than to the radically idealistic efforts afoot when I was in college. I don’t mean to denigrate it, because I’m gratified to see people rejecting commercial capitalism for any reason. But it does seem to be different.

What really prompted this post was a News Hour rebroadcast on January 1 of an interview with Vandana Shiva (originally aired last March), the Indian physicist-turned-ecofeminist activist. It’s clear that I don’t get out nearly enough, because I hadn’t even heard of her, despite the fact that she is truly one of the most articulate voices against globalization that I’ve encountered in all of my travels around this topic.

In November of 2005, Ode magazine published Shiva's article on “Two myths that keep the world poor.” In it she notes that the myths (that poverty causes environmental destruction, and that if you only produce for yourself, you’re not contributing to the economy) lay the blame for poverty at the feet of the poor, rather than on the root causes—industrialization and economic colonialism. She goes on to describe an almost utopian picture of self-sustained living, which industrialization and growth-focused economics have made increasingly difficult to accomplish.

If we in the West persist in seeing small-scale, subsistence-level economies as “poor” simply because they don’t produce stuff for the rest of us to buy, or because they don’t have to buy stuff we produce in order to survive, there is little hope that we can save the world from environmental catastrophe. Things will just keep getting worse if we continue to seek technological fixes, and insist on spreading our own destructive habits to ameliorate “poverty” where it doesn’t really exist. I’m not saying that we shouldn’t try to deal with true poverty—bequeathed upon countless people by greedy corporations that make their money by degrading landscapes and water supplies, exploiting women and children, etc.—but we should certainly not require that everybody become just like us.

The irony, of course, is that in the West we have people seeking simplicity and a rather modest version of poverty (doing without excess), while the companies we work for and buy from are making it impossible for countries like India to maintain traditional subsistence economies. The situation reminds me of the mythical American dream of small-town life, family farms, and Sunday afternoons on the porch. We bemoan the demise of the dream while giant corporate farms, supermarkets, and discount stores are steadily obliterating it, and mourn the loss of what’s left of the rural landscape, but we chalk it up to progress--and then drive our SUVs over to the Wal-Mart to save 15 cents on a loaf of gummy white bread.

The trouble is, too many Americans (and other Westerners) think that we are living in utopia, and that everyone would be happier if they were just like us. This is the worst kind of evangelism, and evidence of a cultural blindness that will only be overcome if our children start learning more about geography, culture, and economic sustainability at an early age--before they've been taught that anybody who doesn't own the latest XBox is irredeemably poor.

Posted by Owlfarmer at 9:26 AM

Owl - In my own life, I have been early exposed to the pitting of two conceptions of living, one against the other, of valuing one mode of living and decrying the value of the contrasting one. My father came from a Hungarian peasant background; my mother, from upper class gentry. My mother reviled the very rich life of our peasant relatives, as being primitive, simplistic and undesirable. At a time when my own mother was reduced to long waits in lines to acquire foodstuffs, my grandmother went to her root cellar, her granary, her barns and sheds to take food for the day or week that she and her husband needed. her food was always plentiful while at the same time my mother scrabbled through lentils and beans coming from China to deparate the stones and gravel from the dried legumes.
I saw early on that what was considered to be an unsophisticated way of living was one of hard work and a source of independence and ultimately satisfaction. There was an aspect of voluntary living in how my paternal peasant relatives lived; of intelligent, dependent life on the sources that sustained them. At the same time, my mother's family scurried around amassing goods for status while being absolutely dependent on a strange mechanism for acquiring necessities that were always vulnerable to laws and methods of supply. Of the two types of relatives, by far were the country folk far more content, and as a child I envied their pace and character of life.
Those early observations have established in me a keen awareness of the flaws in our attitude toward what constitutes poverty and of how we choose to pursue fallacious ways of living and thinking. GEM

I'm pretty sure that many people could share similar stories and contrasts. But modern life has done such a thorough job of creating dichotomies between city ways and country ways, past and present, and has so completely relegated true simplicity to the trash heaps of economic history, that I wouldn't be surprised if family histories are suffering as well.

Even as a teenager--when we're usually so wrapped up in ourselves that we think nothing else exists--I couldn't wait to get back to my grandmother's house in a tiny backwater California town. As in your case, there was a more aristocratic element to the family that could never understand why I didn't want to spend my spare time with them. But I was always drawn to the rural landscape and the simpler pace of what I still think of as "home."

I am, however, very much encouraged by your comments.