Pollution, Poverty, and the Nano 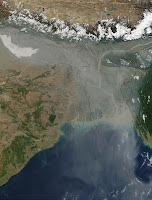 The introduction of the ultra-cheap, Tata “Nano” car in India has prompted significant media response. Just this morning two articles appeared in the “Points” section of the Sunday Dallas Morning News: a reprint of Slate’s essay by Anne Applebaum, “The Nano Challenge,” and another (“The People’s Car”) by Mira Kamdar, author of Planet India: How the Fastest Growing Democracy is Transforming America and the World (Scribner 2007).

Now, the “Nano” is certainly not the first automobile to be introduced as “The People’s Car” (remember the Volkswagen and the Model T?), but this one is being hyped as the car that will transform the Indian economy. According to Robyn Meredith in Forbes, “it would herald the emergence of Tata Motors on the global auto scene, mark the advent of India as a global center for small-car production and represent a victory for those who advocate making cheap goods for potential customers at the ‘bottom of the pyramid’ in emerging markets. Most of all, it would give millions of people now relegated to lesser means of transportation the chance to drive cars” (April 2007).

What’s particularly interesting to me is the promotional video hosted by Ratan Tata himself, in which he describes the evolution of his idea, inspired by seeing entire families precariously perched on motor scooters. The culmination of the research team’s efforts develops dramatically on-screen in the video, first as an engineering sketch, and finally as the fully-realized car—all to the haunting strains of Richard Strauss’s Also Sprach Zarathustra, better known as the theme to Stanley Kubrick’s 2001: A Space Odyssey. The future has arrived! At last!

Tata claims in the video that the car meets existing emissions standards—in India. But India’s pollution problems can only be exacerbated if more and more cars enter already-crowded city streets (most of them ill-suited to motorized traffic in the first place), adding particulates to already horrific air pollution. As Kamdar points out, adding millions of cars in India and China essentially dooms the planet—probably in the sense that it might produce a tipping point that finishes the job the West has already started. Despite the fact that most Indians will actually be unable to afford even the $2500 price tag, the growing middle class will be targeted, persuaded, and sold on owning one of these little status symbols.

Which brings up a central question: why not simply rely on human-powered local transportation (walking, riding bikes, taking pedicabs) for short distances, and on fuel-efficient, low-emissions public transportation for most long distances? Especially in developing countries where air quality is already miserable because of badly-designed factories, why are these people being persuaded that the only way to be “modern” or to “enter the twenty-first century” is to buy into the Western cult of waste and excess?

“Well, it’s okay for you to say,” some will retort. “You live in a comfortable house, drive a car, have plenty to eat. You already have all the stuff I want. How can you criticize my economic choices?”

I grew up in a country where we rode pedicabs and busses to get where we wanted to go. Merchants on bicycles carried crates of their wares all over the city, selling as they went; I remember buying everything from soba to a baby rabbit. These drivers and hawkers were mainly wiry old war veterans who didn’t fit into the emerging Taiwanese economy, but who needed to support their families. Taipei in the late fifties and sixties may not have been a shining beacon of cleanliness (it did, after all, sport open sewers), but the air was far cleaner then than it is now, with its streets choked with cars and motor scooters (despite the shiny new rapid transit system). When my mother returned to the States in the late nineties, she had emphysema, which doctors attributed to a combination of smoking and pollution.

This is not an argument to return to the stone age, as some technophiles would claim it is (not that a stone-age economy doesn’t appeal to my ornerier self). But before Big Capitalism starts foisting more pollution-generators on people who probably don’t really need them, shouldn’t we make sure that the quality of their lives improves first? Shouldn’t they be allowed to make a living that doesn’t require them to ingest toxic fumes all day in order to afford a bit of rice? Are people who grow enough food for themselves and their families, and who live in communities that carry on age-old traditions really poor?

These questions occur to me frequently, as I drive down the highway through suburban sprawl, past strip-malls selling millions of units of absolutely useless frippery, in my eight-year-old fuel- efficient car to a job I really enjoy. The admixture of pleasure and annoyance I experience is probably pretty typical of many liberal-minded, environmentally conscious citizens, even in this part of the world. I would love to live closer to work, but chose this town—thirty miles north, with its historic preservation district—so I wouldn’t have to anguish over the fact that great old houses like mine are being torn down in Dallas to make room for huge, tastelessly-designed, monster mansions. I would love to take the train every day to work (and get off at the station located less than a block from the college), but local voters seem reluctant to raise taxes in order to bring the train this far north, and the state itself makes raising local taxes difficult.

People like me are in no position to tell those in developing countries how to live their lives. But we also shouldn’t be foisting new technologies on them and demanding that they emulate our values and “lifestyles.” I fail to see how filling Indian streets with tiny little cars that cost ten times the annual income of an average Indian family will improve the general economic lot of the citizenry. It will certainly make Mr. Tata wealthier (although, in all fairness, he seems like a reasonable guy) and his corporation even more powerful.

Candace - this is a tough post to respond to. You present contra arguments that developing nations might level at any bristling and naysaying about the putative value of the "nano" in a developing country such as India. However, until we, ourselves, in western Developed nations are willing to forego individual transportation such as cars (which seems highly improbable) any concerns we express about the development of auto industry in India is a moot point. Like it or not, destructive or not, unsustainable or not, Western mode of life, comfort and ease seems to be an aspiration for many citizens of the world who have had the dubious benefit of contact with our information media. If we ourselves cannot see past the setting in stone of attitudes toward what constitutes the 'good life' that the communications media and economic philosophy makes possible and inescapable (almost) how can we expect sensible response from another culture which strives to emulate our 'success'? GEM

Of course, you're absolutely right. I'm working on a post that considers many of the points you've raised. The question is much more complex than I've treated it, so thanks for the swift kick.