Things Are Looking Up in the Year of the Rat 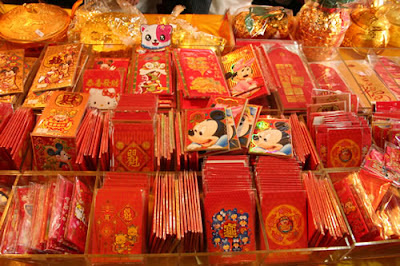 My students often accuse me of being “cynical” (which most of them think means “negative” or “pessimistic”) in my outlook on the world. I somehow doubt, however, that a person with a fundamentally negative or pessimistic world view would spend ten years writing about how it could be better. Anyway, cynical literally means “dog-like”–essentially suspicious, rather than merely “negative.” I will admit to focusing very often on what’s going wrong, if only to articulate my own perceptions about the modern (or post-modern) world and provide suggestions for improvement. A blog about how happy and cute the world is (like the rather precious lai shi, or red packets in the photo) would not only be out of character, but probably really boring as well.

Nonetheless, in honor of the Lunar New Year, I thought I’d point out a couple of heartening events brought to my attention by the local news-rag, The Dallas Morning News. Both involve religion (an appropriate focus for an essentially religious holiday), a topic I tend to avoid because it has a tendency to raise my blood pressure to dangerous levels; but both offer me some hope that all is not lost and we’re not all going to eventually fall into tiger-traps dug by well-meaning but narrow-minded folk who think their way is the only way.

It's not that I have anything against religion as a human cultural phenomenon. In fact, I have participated happily in two ancient religious traditions (pre-Vatican II Catholicism and Conservative Judaism) and also admire many aspects of Eastern faiths and Islam. I am grateful for what they all have taught me. I have lots of very religious Christian relatives and Jewish and Muslim friends who are very reasonable people. But modern evangelical Christianity, extreme militant Orthodox Judaism, and radical Islam have all contributed to my current anxiety about the future of the planet. So when I read these two articles this weekend, my Doomsday Blood Pressure Monitor was set back to healthier levels, at least for a while.

The first is local commentator Steve Blow’s column for today’s edition, “Finding room for evolution in the pulpit.” Now, I have never understood why archly conservative Christians and Jews have a problem with Darwin’s description of natural selection and species-change. I have always seen the evolutionary process as a grandly beautiful scheme, profound in its efficiency and complexity. If ever anything were to convince me of the existence of a Supreme Being, in fact, evolution would be a considerable factor. So my consternation about “Creationism” and “Creation Science” has stemmed from a view that their proponents simply lack interpretive skills. It’s okay, it seems, to see the sexual innuendo in the “Song of Songs” as metaphor, but creation itself had to take place in exactly seven days in 4004 BC(E). Not only that, but God planted fake fossils in the layers of the earth to fool us and/or test our faith.

Coincidentally enough, the same edition of the paper, in the main section, carried an Associated Press story, “Anti-evolutionists target Europe,” about how those godless Europeans are now the focus of a campaign by “Answers in Genesis”—a group out of Kentucky that wants to inflict its particular brand of biblical interpretation on folks in England and on the Continent. My hope, of course, is that reason (given to us by God, right?) prevails, as it seems to be among local Methodists, at least those under the guidance of Senior Pastor Timothy McLemore in Kessler Park (in Oak Cliff, an old southern suburb of Dallas). Dr. McLemore is participating today in Evolution Sunday, according to Steve Blow’s column, because he’s concerned about the injection of religion into the teaching of science: “‘I think the Bible gives us a great creation account, and I think it's profoundly true,’ he said. ‘I just don't think it was ever intended to be scientifically true or even historically true.’” Blow notes that Evolution Sunday emerged from The Clergy Letter Project, which is designed “to demonstrate that religion and science can be compatible and to elevate the quality of the debate of this issue,” according to its website.

It was pretty heartening to discover that the Clergy Letter Project has over 11,000 signatories, all of whom believe that “the timeless truths of the Bible and the discoveries of modern science may comfortably coexist” and that “that the theory of evolution is a foundational scientific truth, one that has stood up to rigorous scrutiny and upon which much of human knowledge and achievement rests. To reject this truth or to treat it as ‘one theory among others’ is to deliberately embrace scientific ignorance and transmit such ignorance to our children. We believe that among God’s good gifts are human minds capable of critical thought and that the failure to fully employ this gift is a rejection of the will of our Creator.” Were I a believin’ man, and a clergyperson, I’d sign it, too.

In Saturday’s Religion section—a shadow, I regret to say, of its former award-winning self (it used to be an entirely separate section, but has dwindled to a single page), special contributor Mary Jacobs interviewed Brian McLaren on the occasion of a conference he’ll be holding in Dallas on February 22 and 23. McLaren is touted everywhere he’s mentioned these days as having been designated by Time Magazine (in 2005) as one of “25 Most Influential Evangelists”—right up there with Rick (Purpose Driven Life) Warren and Douglas (Fellowship Foundation) Coe.

That’s some pretty scary company in my book, but I found myself intrigued by much of what McLaren says in his interview and after having looked through his website and blog posts. His message describes a Christianity much closer to that I was introduced to by Franciscan and Benedictine friends of my mother in Taiwan, and much more closely attuned to contemporary environmental and social realities than that professed by most highly vocal evangelicals. He seems to have little patience for what he calls “fans of Jesus . . . who seek to be adherents to the Christian religion, believers in certain doctrines, consumers of religious products and services, and attenders of religious meetings without being radical disciples of Jesus in their daily lives” (from his “Faith and Action” outline). He puts an entirely new spin on the “what would Jesus do?” conundrum.

What I find most interesting about McLaren’s message as it’s being presented in conjunction with his new book, Everything Must Change and its associated conferences, is that many of his points coincide with aspects of the “conversations” that I work through in More News From Nowhere. Descriptions of the “prosperity” crisis and the “equity” crisis (both of which I’ve talked about in a couple of blogs on being poor and being wealthy) resonate with many of the issues I’m concerned about. He also recommends real-world solutions, such as buying, eating, working, and investing ethically (with practical suggestions on how to go about doing so). If you can get around his somewhat inflammatory buzzwords (“suicide machine” and “covert curriculum” are especially irritating) and suppress suspicion regarding the conferences (they cost $109 to attend, $79 for students, so one can only hope that the proceeds are supporting the mission rather than the missionary), I think much of what he has to say is important to hear, especially for Christians. The fact that he mentions the Hebrew concept of tikkun olam (earth-healing, world-transformation) is also appealing, because it ties his mission in with a longstanding movement among Jews (best articulated in Tikkun magazine).

Maybe all this is a sign of better things to come: a more reasonable, sustainable, year of the Rat. Gonxi facai, everyone—the Chinese equivalent of “Live long, and prosper” (ethically, of course).