Getting Out of Town 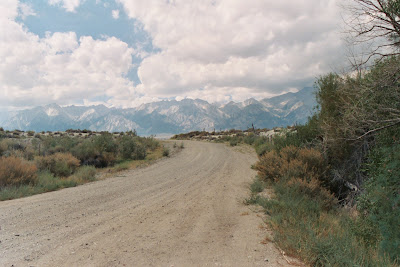 I've been doing a great deal of whining lately, and probably what I need to do is just get away for a bit. Only that's a lot easier said than done around here. 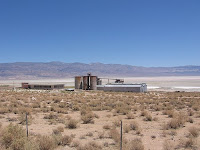 Almost wherever I lived as a child, "out of town" was anywhere from a couple of hundred yards to a short drive away. In Cottonwood, the first real home I remember--even though it was my grandparents' and not my parents'--we were already out of town. In fact, the nearest real town (where I was born) was several miles up the road. Our house was next to the L. A. Aqueduct, but outside the compound of houses in which the power-plant workers lived, there was wilderness. Desert, to be more exact, on the verge of mountains (Sierras), with broad vistas 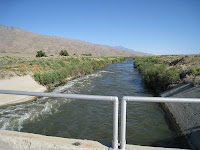 across the Owens Lake and the Inyos beyond. Only a couple of ridges away lay Death Valley. We actually had to be on the lookout for mountain lions and snakes, and had to be careful not to fall into the aqueduct if we didn't want to get to the San Fernando Valley the hard way. The aqueduct is one reason why the land was so empty then; mining operations around the turn of the century had built settlements on the lake, like Keeler pictured below, which are now ghost towns or nearly so. The end of profitable mining and the drying of the river coincided to wreak economic devastation on the inhabitants. 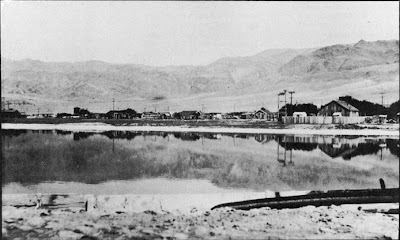 After my grandfather died and my grandmother moved to Lone Pine, she lived on the east side of town, only a block away from more desert, this time closer to the Inyos than the Sierras. But if I wanted to be by myself or just go for a walk, all I had to do was get over a barbed wire fence and I was beyond the pale. Often, my grandmother and I would hop in her old Chevy and go for a ride in the Alabama Hills, a primeval landscape of weathered granite boulders now popular as a venue for space opera movies and SUV commercials. A few folks live up in there, but mostly it's open land. I took Beloved Spouse there for a ride the last time we were in Lone Pine, and we found a decomposing cow carcass. Some poor bovine got through a fence and couldn't get back, so she got stuck and died.

In Taiwan, after my parents moved us to Yang Ming Shan (most of which is now a national park), each of the three different houses we lived in over three years was within yards of a trail into the mountains. I often went out hiking alone (a true free-range child, I think), on one of the trails, or across the endless rice paddies that stepped up each hill. I'm pretty sure folks knew where I was most of the time, due to an active local grapevine, but I felt free and powerful and on my own. At the time I was reading through Enid Blyton's repertoire of stories about children caught up in adventures with pirates and smugglers, and I was pretty sure this was as close as I would get. 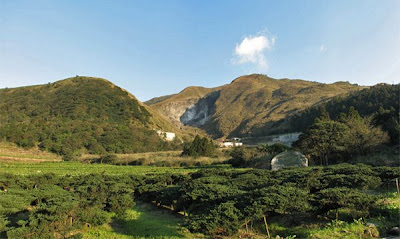 Nowadays, if I want to get away, I can still drive a bit north and east, but that's the only possible direction. As Dallas inexorably sprawls northward, it's bleeding through Richardson and Plano and Allen, and what little open space separates us is rapidly being filled in by new housing developments and shopping malls. I'm not altogether unhappy about one of these, because it's going to mean a bookstore (albeit a Borders; in a town of 150,000 we only have two others--Half Price Books and a single antique book seller on the Square in downtown McKinney) and a Whole Foods Market. But it also means that all the open land that made this place tolerable thirty years ago (when we used to take the kids out on Sunday drives in the country, and when their Montessori school was located on an acre out in the middle of nowhere) is nearly gone. Leaving me with, quite literally, nowhere to go. I'm just not willing to spend the gas and enlarge my footprint that much just for a short-lived jaunt down a country lane and a depressing ride back to reality.

This has probably sparked my willingness to let part of my property go wild, and let it become whatever it wants. If I can't get to the country, a few trees and some wild plants bring it to me. This will have to do for now, I suppose, although we both fantasize about open ranchland in Paraguay after seeing an episode of Anthony Bourdain's No Reservations, or a trip into the mountains after watching Sunrise Earth and seeing moose in the middle of a Teton lake.

What still amazes me is my memory of flying west to Olympia last year for my Aunt and Uncle's fiftieth wedding anniversary party. I fly reluctantly, not really believing in aerodynamic theory, and am pretty white-knuckled for the entire trip. But I was glued to the window, watching mile after mile of open space drift by beneath me. There's still lots of sparsely occupied property in this country, and an abundance of uninhabited land. If you don't believe me, spend a few hours on Google Earth, traveling west on a line from Dallas to Seattle. One reason that there's anything left is, of course, due to a general scarcity of water. But those of us who love the desert would be happy with a trickle of stream and an expanse of openness. It puts things into perspective in a way nothing but a trip into space or a sailboat in open ocean can quite replicate.

We are, after all, only a speck--a mote, as they say, in the eye of God. Our sheer numbers and proximity to one another help convince us of an importance that's really only transitory and ephemeral. We're powerful enough to mess things up pretty well, but probably not powerful enough to do everything in. The earth does abide--as we could see much better if we could only get the hell out of Dodge once in a while and spend some uncivilized time in some of that open space.

Photos: A road in the Owens Valley, near Big Pine and Uhlmeyer Spring, taken in 2006; two photos from Aquafornia's Flickr photostream of the LA aqueduct: the old Pittsburgh Plate Glass factory on Owens Lake, where my father once worked, and a picture of the aqueduct intake from whence the Owens River water gets sent south to the Haiwee Reservoir; the Alabama Hills by Daniel Mayer, via Wikimedia Commons; an old photo of Keeler, California, from an unknown source; a WikiTravel shot of Yang Ming Shan, up the road from where we lived.
Posted by Owlfarmer at 8:10 AM

Hmmmmm your favorite daughter's life gets a lot easier on December 19th. Perhaps we could plan a trip somewhere?

We could try the fly-to-Las Vegas trip and rent a hybrid for crossing Death Valley--only without getting into a fight. Or fly to Burbank and go up to the Valley that way.

My spring break next year?