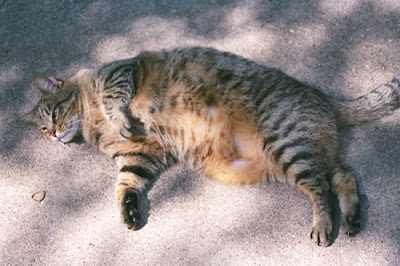 The actual time and place at which human beings domesticated cats seems to be in dispute, but pictures of cats appear in Egypt in the Bronze Age, and a burial on Cyprus suggests that cats may have found a place among Neolithic populations--not as early as domesticated dogs, but certainly early on in the process of civilizing ourselves.

The relationship between humans and pets is complex, and we often prefer one species over another for a variety of reasons. Dogs are more companionable by reputation, and cats more aloof, but neither stereotype fits every breed of dog or cat, or any individual animal, for that matter. Take, for example, Biscuit--the affable, large tabby who more or less came with our house when we moved in eight plus years ago. 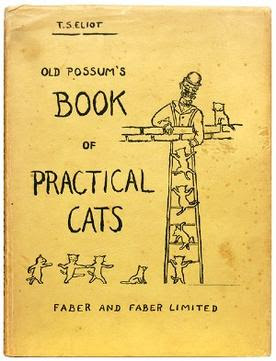 When I first saw him (and thinking that he might be a pregnant female), these lines from Old Possum occurred to me:

The cats all stayed indoors, so when we worked outside, the only pet who joined us was the dog--until Biscuit (originally "owned" by a couple with a large property just up the street) decided he liked us better, and began to spend most of his time lounging on our cars, or keeping the dog company in the back yard. Worried about his well-being as winter set in, we installed a cat door into the shed, and made him a bed where he clearly spent most of his nights. Every morning, however, he appeared at the back door, just in time for breakfast.

From his girth it was apparent that we weren't the only people in the neighborhood who fed him. But we were the ones who provided the good stuff and ended up taking him to the vet, so, after two of the other cats had died, Biscuit became an indoor-outdoor cat, and an official member of the family (with the blessing of his previous clan). Then, after we lost the Bulldog to cancer and acquired a couple of mutt puppies, Biscuit helped to bring 'em up; he was the only cat who could really hold his own against their exuberance, and didn't mind sharing space with them--although he no longer spent any time in the back yard where the dogs seemed to confuse him with the squirrels.

For the rest of his life, Biscuit would see us off to school and greet us when we returned. He knocked politely on the door to be let in, and waited patiently next to it to be let out. When I worked on the front border he'd come and bask in the sun next to me, or sit on the porch rail to survey his domain. If I went out at night to watch the moon, he'd come along and gaze upward as if he understood what I was doing and took as much pleasure in it as I did.

He kept the shed relatively vermin free, until he got too lazy (and too well fed on pricey holistic cat food) to run after them. They practically had to sacrifice themselves at his feet for him to take the bait, but more than once we had to bury what was left over from an evening's work. Indoors, he especially loved to sit on our laps when we watched movies, attending to the action until he fell asleep, purring loudly.

During these last two weeks, however, his apparently early exposure to to FIV (the cat-version of AIDS) caught up with him, and he began to lose his vigor. He still liked company, and still purred with pleasure when petted, but it was clear that something was wrong. When we took him to the vet this morning we found out just how much had stopped working, and how much he must have been hurting, and decided it was time to say goodbye. He kept purring until the end, and looked rather elegant when he died, as if he were lounging on a cushion in a bordello.

Animals of all sorts, and pets especially, are part of what makes this world pleasurable. We enjoy their company, and learn from them. We admire their grace, or their demeanor, or even their suspicion. All dogs, said Plato, are philosophers. They, like Odysseus's Argo, know who their friends are. Cats share this quality to some extent, although they tend to bestow their friendship somewhat more selectively.

Next week another little cedar box will join those containing the ashes of Biscuit's predecessors. But as much as we've loved the cats who've come before, there really is something special about one who domesticates the humans of his choice, and makes them his friends. No questions asked.

The image from T. S. Eliot's Old Possum's Book of Practical Cats is from Wikipedia--which includes the text of the poems. The opening image was taken two years ago, on the driveway where Biscuit would present his belly for a rub, by way of greeting.

Posted by Owlfarmer at 1:31 PM

That obituary is nicer than most that are published in newspapers! Biscuit picked a great family, and your house won't be the same without him. See you soon and Go Steelers!

Biscuit is a shorter-haired version of our cat Captain and obviously a cattish gentleman. This is a lovely description of his place in your lives and of your affection got him. I hope someday to get as good an obituary as you have provided for him. You are spot on - there is something very special about a cat who domesticates his humans, and also tolerates some of our silly behaviours - you know, the ones we do sometimes to get a bit of rise out of the cat, just fooling around. A cat never seems to forget, but forgives a lot. G

I think Biscuit would be both pleased and amused at the reaction to his demise. He had many friends in the neighborhood (far more than I), and was always asked after by anyone who had ever visited the house.

It's good to hear from you, GEM, and to see that you've been posting on your "local" blog. It's good to have a chance to see your work.