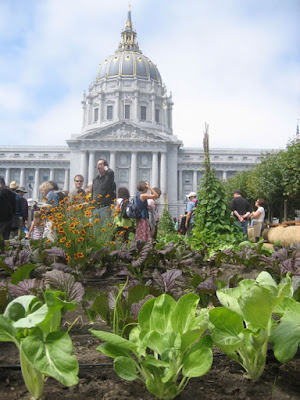 As usual, a couple of timely coincidences has prompted another post. This time, we're back to food.

I was grazing through the Orion update I get periodically, where a short piece by Jason Peters about ecological illiteracy points out that ignorance about our almost complete dependence on oil is going to affect us profoundly, and not all that far in the future.

Then, Geoff Isaac on his It Came from the Kitchen blog pointed me to Mark Kinder's article for BBC News, which essentially illustrates the problems that derive from being culturally stupid about how we do things: Food Needs 'Fundamental Rethink.'

The main point Peters makes is that we're so uneducated about the consequences of our oil-addiction that we operate under a quasi-religious faith in the economy, and that "in an increasingly abstract economy we have simply let ourselves live in a kind of blissful ignorance about oil—how it was formed, what we use it for, how we get it, what and whom we destroy in the process."

Kinder's article focuses on City University of London professor, Tim Lang, who notes that (among other problems with the food supply) "We have an entirely oil-based food economy, and yet oil is running out. The impact of that on agriculture is one of the drivers of the volatility in the world food commodity markets."

I think the whole problem is actually even more insidious than oil-dependence, because it seems to be closely related to a kind of blindness about how much we depend on complex energy sources of all varieties for just about everything we do. For example, people concerned about our reliance on fossil fuels (especially those we obtain at great cost from other countries) tout biofuels like ethanol as solutions. But ethanol itself is just one more energy-intensive way of obtaining fuel, and one whose ramifications include reducing the amount of land that can be used for farming foodstuffs. So even when we're not using oil in every aspect of food production, we're using it as a production model even while we try to wean ourselves from it.

Professor Lang advocates a radical rethinking of the way we view our diets, and how we feed ourselves, and he's one among a large and growing number of people who are actively thinking about how we can change both habits and policies to address the ultimate issue: how do we feed a population nearing 9 billions without destroying the planet in the first place?

Britain, according to the article, is beginning to try to answer the question by establishing a Food Council (of which Lang is a member). This is an encouraging step, and one that needs to be taken in the United States. In fact, Rod Dreher (local Christian conservative blogger and author of Crunchy Cons, both the book and the blog) wrote a Thanksgiving piece for NPR in November, after Barack Obama was elected, and noted the need for change here at home: "We have to quit subsidizing agribusiness. We need policies that encourage the building of local food economies, not ones that depend heavily on fossil fuel transport. We need reform of regulatory codes that purport to protect the public's health, but really shield agribusiness from local competition."

Dreher then makes a rather modest, but interesting proposal to the new President:

May I suggest dinner? Let agribusiness lobbyists feed their faces at The Palm. You break bread at the White House with guests like Wendell Berry, Joel Salatin, Michael Pollan and Will Allen, the urban gardener who just won a MacArthur Foundation grant for teaching inner-city folks how to raise their own food. Lend them your sympathetic ear. And by the way, why not set a good example by planting a kitchen garden on the White House lawn?

He goes on to point out that this is one area where social conservatives like himself and tree-huggers like me can work together: "taking care of the land and building traditional food cultures are areas where conservatives and liberals can not only find common ground, but sow seeds in it that will bear good fruit for us all."

What he doesn't mention here is that the more we all become involved in understanding how and where our food is grown, the more quickly we can ameliorate our environmental illiteracy, and educate our communities and our children about ways to break the cycle of high-tech, fuel-greedy technological food production, and replace them with simpler ways of feeding ourselves before we mess things up so completely that choices no longer exist.

In this regard, I tend to be somewhat sanguine, since evidence that a paradigm shift is imminent seem to be popping up every other second or so. Take, for example, movements like Slow Food and the increase in permaculture practices worldwide.

A quick tootle around the internet provided me the following, and there are myriad more where these came from. Signs that things aren't as bad as they might seem:

The Science Barge is a New York effort to educate people about urban agriculture and sustainability.

A CBS report on the urban farming movement, linked on City Farmer News.

The MacArthur Foundation page on honoree Will Allen

Urban Habitat Chicago: Demonstrating the viability of sustainable concepts and practices in urban environments through research, education, and hands-on projects.

A Google search on "urban farm" or "urban agriculture" will lift your spirits, because the links I've listed are only a smidgen of a sample.

Photo credit: The victory gardens at Slow Food Nation by David Silver, from Wikimedia Commons.
Posted by Owlfarmer at 10:58 AM

Thanks for the link Candayce. It made my day, especially since I'm holed up in a winter storm and all that's missing is the spooky hotel and Jack Nicholson.

I do read the comments on my blog, but maybe you can help me by telling me how to delete all the spam.

P.S. Great Post. I'm both leery and excited about the impact climate change and new technologies will have on our food supply and how they affect public perceptions of food.

I think the first small step will be when we start falling in love with it again.

When I click on "comments" at the end of a post, there's a cute little trash can in the lower left-hand corner of each remark. Before I started using the first-level filter (the word recognition deal) I deleted more than my share of spammy things. But you've already got that, so just using the trash icon ought to enable you to delete what you don't want.

Your remarks,however, will remain here. Thanks for reading--especially since I'm having trouble getting on the forum, and miss your insights.

It would be so neat if they started a vegetable garden at the Whitehouse! Thank you for the great links.