One Giant Weep for Mankind 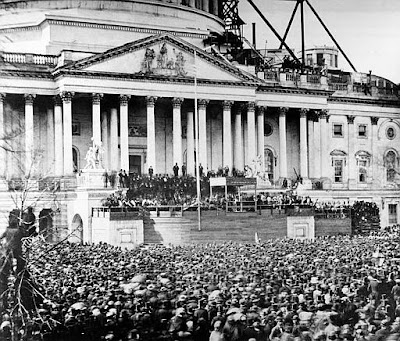 Well, maybe not so much. But it's certainly been an emotional morning. I decided to watch today's inaugural ceremonies with my laptop in front of me, and this is what came out:

As cranky as I can get about all manner of events, I am a real sop for historical events.

When the Berlin Wall came down, I called my children in from their bedrooms to watch the exuberant crowds on TV, wielding sledgehammers, picks, and even their bare hands. Tears rolled down my cheeks as the chorale from Beethoven's Ninth Symphony, "Ode to Joy," was played over and over.

I cry when I vote. I've mentioned before that ever since I can remember, the act of voting has choked me up, to the extent that poll watchers regularly hug me and assure me that I'm not the only one.

I guess I'm not. Last night when I was watching the MSNBC news shows, I noticed how frequently Keith Olbermann (an even crankier person than I am) and Rachel Maddow found themselves becoming verklempt over the significance of what would take place the next morning.

As I type, it's 9:30 EST, and the crowds around the inauguration venue are already almost at capacity. Although the colors of faces vary as they always do, it's amazing and wonderful to see how many African Americans have made their way from all over the country to witness this singular moment. It's even more poignant because it takes place only one day after the Martin Luther King national holiday, when we were reminded that Dr. King was only four years off when he predicted a Black president within forty years.

The people who seem least fazed by all the hoopla are the Obamas themselves: elegant, cool, composed--presidential. It will be interesting to note if a tear escapes either of them during the swearing in. And the rituals begin: the trip to the church, the arrival at the White House for coffee with the Bushes, and then the trip to the Capitol for the swearing in ceremony.

Newsfolk are positively giddy. After all, "If you're a civics dork," says Rachel Maddow, "this is bigger than Christmas." That's probably understating things a bit, because even those who don't get excited by many occasions (like my Beloved Spouse) will be watching the ceremony with their students and absorbing the moment. I doubt if a more appropriate point could be made to a class full of social and political philosophy students than to see the first Black president inaugurated on their first day of class. I'd be interested to learn how many of them weep through it all, because the intensity of the moment is always enhanced by fellow-feeling.

Of course, the opposite could happen. My husband's college is located in a Republican bastion, and this generation seems to be more sentimental about celebrities than about polititians. Even my own children, coerced into watching the Berlin Wall tumble down all those years ago (has it really been twenty years?), saw little to fuss about. They hadn't been around when it was built, though, and had little sense of its significance to the Cold War (they had never had to "duck and cover"). On the other hand, few of today's kids have been completely untouched by the Iraq war or the failing economy, so perhaps they will participate in the sense of promise being displayed on the Mall in Washington.

More than one person has mentioned the distance we have all traveled from the time when white people owned black people, when slaves were transported in the holds of ships during the Middle Passage, and when we allowed people of color to serve in the armed forces, but didn't allow them to hold office, or even vote. This moment doesn't belong to a race, it belongs to human beings who, by electing this one man in this one country to this one office, have finally come of age. We've grown up symbolically, even though it might still be generations before its full impact takes effect.

As Barack Obama appears through the door (it's after noon, so he's already officially the President), the effect is pretty spectacular. Flags wave, chants of "O-ba-ma" erupt, and cameras pan over millions of smiling faces. Obama himself seems nonplussed, and everyone's probably wondering (as the Newsies all are) what he's thinking.

Aretha Franklin gets up to sing "My Country Tis of Thee," which I find amusing, because its tune is "God Save the Queen." At least it's not "God Bless America" which has become the alternate national anthem since 9/11, but it might better have been "America the Beautiful." Since it's Aretha, though, she makes it swing. I didn't get weepy here, but might later when the Navy Sea Chanters sing the "Star Spangled Banner."

Before the actual oath we get a variation of Aaron Copland's variation of the Shaker hymn "Simple Gifts," arranged by Star Wars Boy, John Williams, and performed sweetly and lovingly by Itzak Perlman, Yo Yo Ma, Gabriela Montoya, and Anthony McGill. The quartet is as multi-racial as the audience and the new administration.

And here it is: a bit of a muff (Obama seemed to know the text better than Chief Justice Roberts did), but an oath nonetheless, and as predicted, tears everywhere (except on the podium).

Good speech, too. It didn't make me blubber, but it did give me hope, and I think children in the future will memorize it if the promise this presidency engenders comes to fruition. I can go back to work now, having spent the morning well, and witnessed an historic moment with fewer tears than expected. Maybe that's a good sign--that I haven't been overcome with sentimentality but rather with sobriety. Reverend Lowery's image of transforming tanks into tractors was a great parting shot. Amen, indeed.

Image credit: Since there weren't any photos to upload, I thought a shot of Lincoln's inauguration would be appropriate: "Abraham Lincoln's first inauguration which took place in Washington, DC. Lincoln stands underneath the covering at the center of the photograph. The scaffolding at upper right was being used in construction of the Capitol dome." Wikimedia Commons.
Posted by Owlfarmer at 9:50 AM

I thought it was a wonderful speech, and I hope many more of my age understand how much meaning is behind it. I'm glad that we have a leader who recognizes that he's still just a citizen, and understands how the rest of the world sees us too. For a long time now I've made the analogy that America is in it's adolescence compared to the rest of the world. Now, I'm glad I'm not alone, and I'm glad that someone with a bigger voice addressed that now is the time to move forward, and grow up.

I, too, watched - spellbound and hopeful. As a Canadian, i found "My country 'tis of thee" sung to our National Anthem rather bizarre, but decided that the quartet of mixed race and creed musicians of the Copland variation was symbolicallly perfect on all counts. "Simple Gifts" is a beautiful air and so appropriate at a time like this. I teared up to watch the delight with which Yo Yo Ma engaged in his playing - the whole piece was joyous, a lovely nod from one composer to a predecessor to an earlier traditional music. Tradition in the making, on all counts! Wow! G

The musical choices offered an interesting backdrop to the flavor of the moment. Maybe Aretha Franklin chose "My Country Tis of Thee" to acknowledge our British roots. And only she could have worn the church-lady hat with such style. But the quartet was, I agree, absolutely splendid. I highly recommend the recent album by Yo Yo Ma and Friends--the first and only Christmas album I've ever bought. It's just wonderful, and playable long after the holidays are over.

And Krimzon, I thought of you and your generation throughout the ceremonies. You young, brilliant, wonderful people deserve far better than you've gotten, and I think you may finally have a President who can deliver you from what my generation has helped to bring about. Not by himself, certainly, but with everybody's help.