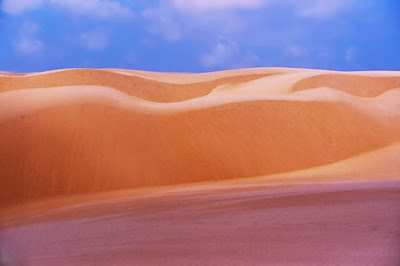 Rather than spending the evening carousing, Beloved Spouse and I celebrated New Year's Eve snuggled up in front of an amazing film: House of Sand (Casa De Areia), Portugese director Andrucha Waddington's beautifully shot story about three generations of women in northern Brazil.

The setting is utterly unearthly--which makes sense because of the many references to the moon and space exploration scattered throughout. The landscape becomes another character, and that character is The Desert. I've never wanted to visit a place quite so badly after seeing a film, even though films shot in the desert tend to be among my favorites.

According to the "making of" feature on the DVD, the desert location, in Lençóis Maranhenses National Park, actually helped to write the story, which was initially inspired by a snippet of a legend Waddington heard (I forgot where). Desert landscapes can both inspire awe and signify profound isolation and loneliness, as they do here, but I never tire of seeing panoramas of dunes (think of the opening scenes in The English Patient, or some of the magnificent shots in Lawrence of Arabia). 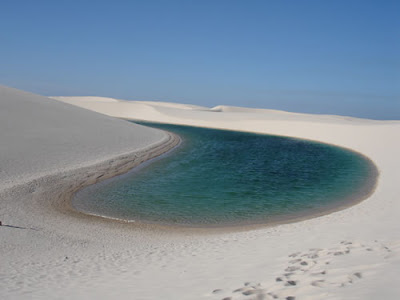 I once thought that the ideal place to live would be in a desert on the edge of the sea, with impossibly high mountains in the background. This film contains two of these elements, and the conjunction of water and sand punctuates its languorous pace (which I know many would find tedious; "too long" is a judgment passed on many of my favorite movies by critics with abysmally short attention spans). I'm reminded of the occasional moments in Death Valley, after abundant spring rains, when the desolation of the sand dunes is framed by seldom-seen fields of wild flowers. The contrast is breathtaking, and only hinted at in photos like the one below. 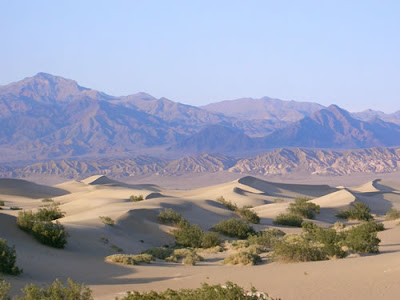 Alien landscapes abound on this planet: that is, "alien" in the sense of "otherworldly," even though they're very much the product of home planet forces. They're only alien because most people choose not to live in them, or they are so remote and inaccessible that few encounter them. There must be an initial bond, I think, between human beings in the desert in order for them to love it, precisely because it's so difficult to live in. The granite sand in the high desert of the Owens Valley is in my blood, and probably accounts for my affection.

For those of us who find transcendent moments not in the worship of deities but in the very idea that our existence is accidental, the desert--and films that recognize its visual power--serves as a reminder of our sheer luck. We don't live on Tatooine or Arakkis, and so our lives aren't controlled by sand. But we can get an inkling of the fragility of existence by spending some time, even virtually, in one of these places; perhaps if more people were to do so, we could better appreciate this planet's luxurious abundance and variety, which our modern ways of life have threatened so significantly.

Photo credits: "Photo of one of the lakes of the Lençóis Maranhenses National Park. This particular lake is close to Lagoa Azul (blue lake)" by Vitor. Dunes at Lençóis Maranhenses by cigh_66. Death Valley Dunes by Urban. All via Wikimedia Commons
Posted by Owlfarmer at 8:39 AM