Rolling Up Our Sleeves and Darning the Sheets 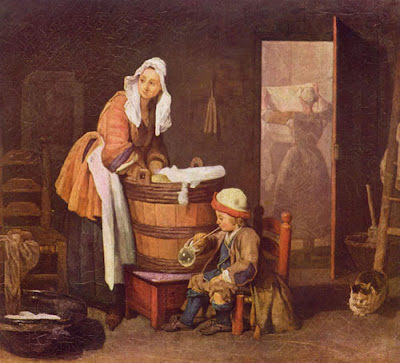 The nice picture that appeared on all the news shows and in the paper this morning (not the one I've used above), of Barack Obama sans jacket, calling world leaders from his new office was kind of inspiring. "Get to work," it seems to say. "Now."

So I'm going to go back to preaching about profligacy and superficiality, while I work at trying to find ways in which those of us who live in this still-the-wealthiest-nation-on-earth can live better. Not "better" in the sense of "getting more stuff with less money," but in the sense of "intellectually richer" or "more in tune with the rest of the natural world." That is, when I'm not trying to stockpile enough PowerPoint lectures to get my sub through the Spring quarter.

The Dallas Morning News has started to run a "Dollar Wise" feature in its Guide section, and the January 11 edition ran Nancy Visser's "Confessions of Consumer Dropouts," which (on the surface, anyway) seemed to echo the theme of Judith Levine's book, Not Buying It (about which I wrote back in my December post, "Waste Not"). Visser's pledge is not to not buy anything for a year--it's just to not buy anything new. Well, that's noble enough, I thought. "So, in 2009, we will buy nothing new except food, toiletries, and home-improvement items." This represents the renewal of a vow made in 2007, which resulted in a few changed habits, a raised consumer consciousness, and that "helped define our values." She doesn't explain what that means, but I didn't read the original article (if there was one).

Her advice on how to accomplish these goals comes under a sub-heading, "Consumer Zen." Copywriters really do need to start paying attention to what they say, because what follows has nothing at all to do with Zen.

Visser's rules are simple enough, and laudable for the most part. For example, she points out that when you don't spend time shopping, you have more time for other pursuits--like reading the whole paper instead of just the ads. One really helpful observation is that one can learn to live with what one has; as soon as you stop thinking about buying stuff all the time, you no longer seem to "need" new counter tops, or a new rug. But her pledge to not buy anything new includes some odd subterfuges: like stockpiling toiletries before you begin (she didn't actually do this on purpose; she just took advantage of rebates out of habit and ended up with nearly a years' supply of deodorant and such). If you're like me--someone who refuses to buy shampoo laden with questionable chemicals--you don't get rebate coupons. It occurs to me to suggest that if you're not spending all that time shopping for rebatable cosmetics, you could probably make your own out of really simple, safe, organic ingredients.

And here's a hint for her: a one-time purchase of a washable furnace filter will save you from having to replace them. Forever. And it's possible to find recycled tile for the entry hall (according to Visser, "used tile isn't an option." Why not?). If you want to save money on that sort of thing, shop salvage yards and your nearest Habitat for Humanity Re-store.

My point here is not that there's anything nefarious going on; it's just that there's no Zen. The reasons for not buying new things should be bound to the same reasons as for not buying more stuff at all. Only buy what you need. And when you do so, think of the consequences. Sometimes it's better to buy new: like purchasing a low-emissions car that gets better fuel economy instead of an old gas guzzling fume-spewer. When you have to buy new bedding, as Zisser insists she must ("No used bedding for us!"), save up for high-quality, organically-grown, fair-trade bedsheets that will last a lifetime. Personally, I relish sleeping on the few pillow cases I still have that were lovingly embroidered by my great grandmother, and quite a number of people seem to be happy to purchase "antique" linens (as long, I guess, as they're from France, where the heirlooms of countless French farm wives are being sold off to the great glee of English and American high-end consumers). And whatever happened to darning the sheets (even if you don't have Roman slaves to do it*)?

Real economy isn't just about saving money or uncluttering our lives. It's about rethinking how we live. The new President touched on this in is inaugural address, when he noted the following:
That we are in the midst of crisis is now well understood. Our nation is at war against a far-reaching network of violence and hatred. Our economy is badly weakened, a consequence of greed and irresponsibility on the part of some but also our collective failure to make hard choices and prepare the nation for a new age.
The hard choices will involve the Big Items like what kinds of automobiles we manufacture, what kinds of fuels we use, how we treat our croplands (and what we grow), how we treat our poor and our sick, and what becomes of our immigrants.

But the choices also include how we live. Nancy Visser's effort at getting a handle on how she spends her money is commendable in many respects; but like many such efforts, it doesn't really address the fundamental question of need versus want. She admits to coveting new stuff, and expresses the following hope: "May the recession end before we have to swear off used stuff, too."

Yes, Mr. President; we do have some hard choices to make. And we need some education of desire to help us make them.

*This is an obscure reference that only fans of the old BBC comedy, Up Pompeii!! will get; the protagonist-slave, Lurcio, complains about most of his tasks--including darning the sheets.

Image credit: Jean-Baptiste-Siméon Chardin, The Laundress, 1735. Owned by the Hermitage, available at Wikimedia Commons.
Posted by Owlfarmer at 7:51 AM