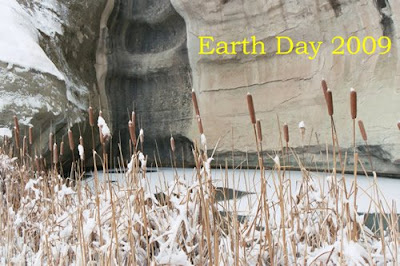 It's hard to believe, thinking back to the earliest Earth Days I can remember (I have a poster I acquired in Philadelphia for Earth Day 1970), that it's taken us this long to recognize (on a large enough scale) the earth's fragility and our part in either dooming it or saving it. Not everyone is convinced, even now, but at least there seems to be a groundswell of recognition that we do in fact need to do something.

To some, "something" is ticking off the latest "10 Things You Can Do to Save the Earth" and then taking off for an Earth Day picnic in a mega SUV. Or attending and Earth Day event and then heading to McDonalds for a Happy Meal. Or something equally superficial.

Even though environmental issues are more visible, the issues themselves haven't been completely embraced as causes worth foregoing convenience for, or requiring any kind of meaningful sacrifice. Turn my thermostat up to 80 in the summer? Are you nuts? Redesign my lawn so that it doesn't require watering? My property values will go down! Etc.

I am, however, encouraged by the fact that more blue recycling bins are going out on the streets every Friday, sometimes even without the standard green bins next to them (our green bin goes out once a month if that). I'd like to set a goal of two blue bins a month and one green bin every two, and I think it's doable, now that I'm dead-set on not buying overly packaged products.

Last week's announcement that the Obama administration will allow the EPA to treat greenhouse gasses as pollutants is the best news this year. I'm thoroughly convinced that this economy can be restored largely by investments in lowering pollution (and devleoping the technologies that make this possible) and in alternative energy sources that will allow homeowners to increasingly produce at least part of the electricity they use. I'd love to see cities moving toward smaller, more centralized grids, but that may not happen in my lifetime. Still, I do see a glimmer of hope. Investing in the people and technological development to make these new possibilites work can go a long way toward reforming markets and providing a wide variety of new jobs requiring little re-training.

This year's Earth Day projects in the Owl household include expanding the kitchen garden, lining existing curtains and adding Roman shades with thermal barriers to windows that don't already have them. Our energy bills last summer and winter were already significantly lower than the previous year's, so it's clear that strategies like these can work even in an old, drafty house. We'll also need to have the fireplace looked at, so I'll be in the market for a fuel-efficient insert to make our cozy home fires cozier and less polluting. Butts to collect rainwater are also on the list of things to add--one for every downspout (although most of our gutters have finally been removed, we still have three or four downspouts that can channel water into barrels to help with garden watering when the rains don't come).

I don't really mean to belittle the "10 Things" approach, but we just can't stop at that. Real change requires real adjustment. We've grown lazy and spoiled, unable to handle the everyday realities our ancestors dealt with on a regular basis. The more we know about the food we eat and where it comes from, the more we particiapte in nourishing our own bodies, the more authentic exercise we get (yard work is really good exercise!), and the tougher we get about dealing with the discomforts of heat and humidity, the better off--and healthier--we'll be.

Happy Earth Day, Folks. Enjoy the festivities, but then go home, throw open your windows, and turn off the A/C until the temp hits at least 85 outside.

Photo: A snowy El Morro National Monument, New Mexico, taken in December of 2003.
Posted by Owlfarmer at 6:49 AM

Happy Earth Day! Yes, we all need to make major changes in our lifestyles in order to really change the direction the planet is going. Don't you wish people would just wake up one day and decide to treat each other and the earth with kindness? I am encouraged that people in general do seem way more excited about taking care of the planet than they were even ten years ago. Let's hope it's not too late!