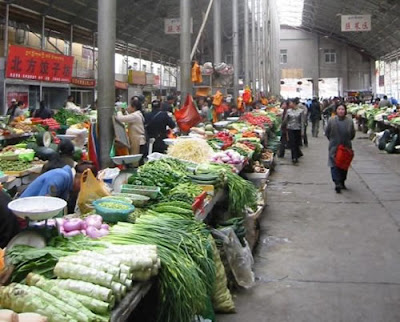 In the first segment of this particular rant about food (Eating and Being), I offered up some suggestions about how to make our food consumption more meaningful. I see far too many people treating meals as if they were stops at a fuel station--a necessary pain in the pocketbook, that takes valuable time away from families who need to be doing other things.

Like what? Endless soccer practices and games where kids are exposed to bad sportsmanship on the part of angry parents? Extracurricular activities whose primary purpose is to pad the record of a college-bound teenager trying to get into Harvard? Cheerleading practice? This topic deserves a ramble of its own, but it also leads into the second aspect of the role food plays in our lives: purchasing the raw ingredients.

Readers of this blog will already know that I'm a firm espouser of "from scratch" whenever possible. There are myriad reasons for this, not the least of which has to do with our over-consumption of highly-processed, over-packaged foodstuffs. So I want to use this post to address a couple of issues that have to do with the declining economy and our ability to enjoy healthful meals. I've already discussed a little of this in previous posts, but not all that recently, and I'll try to bring them together here.

Some arguments against eating more simply and avoiding over-preparation are constructed around costs: Eating fresh organic food is more expensive than standard supermarket fare (or: A box of mashed potatoes is "cheaper" than buying whole potatoes and cooking them).

I thought of looking up a variety of foods and the boxed versions and comparing prices, but I don't have the energy, so my counter-argument goes something like this: A few russet potatoes (scrubbed to remove dirt and surface pesticides if they're not organically grown) cost maybe two bucks. Roast these in the oven sliced and seasoned with a little olive oil, salt, and pepper, and you've got a nutritious version of french fries. Or roast them with some garlic and then mash them with a little salt, pepper, and low-fat milk for an absolutely delicious side dish. Buy the packaged french fries (or even "oven fries") and you're paying not only for the potatoes and the energy it took to transport and cook them--but all this plus the packaging (a plastic pouch), storage (freezer), preservatives, additives, salt (by far more than anyone needs), and voila! It's not only cheaper to roast your own, but nutritionally superior and less environmentally impactful. A box of prepared mashed potatoes might seem cheaper on the shelf, but not when you analyze portion size, ingredients, processing, packaging, and advertising costs, and consequences to your health from eating foods with far more salt and other crap than is necessary. Add on a premium for buying the low-salt or low-fat version, and you, my friend, have been had.

The major problem as I see it is that Americans have lost touch with their food. They don't know where it came from, they know nothing about who grew it, they seldom note its country of origin (many organic foods, especially out-of-season varieties, are transported huge distances), and if they buy packaged foods, they're not very critical about ingredient labels and/or portion sizes. Food has become the equivalent of a human gas station where one goes to "fill up" rather than to enrich one's body and enhance one's life.

The good news is that many are now becoming more conscious of the problem. Recent online articles, like this one from Reuters, Agflation: The Real Costs of Rising Food Prices, are raising awareness about the real costs of feeding ourselves, on a global scale. This one's an eye opener because it discusses a wide variety of problems occurring both in the United States and world wide, as we try to find alternative forms of energy to fuel our automobiles--not our stomachs.

However, it's also our good fortune to live in a moment where alternatives to the standard way of doing things are beginning to emerge. The Slow Food movement encourages people to think about what they eat, and to take care and time in preparing it. Farmers' markets are popping up on a regular basis (our local market opened today for the season; I'm not quite up to the trek yet, but I'm hoping that by next weekend I can partake), Community gardens are sprouting like dandelions in vacant lots, and Community Supported Agriculture is keeping small farmers in business and allowing new farmers to make a more certain living by soliciting subscribers for seasonal produce, cheese, eggs, pastured meat, and other goodies.

We're also lucky to have a First Lady who's not afraid to get her hands dirty, and who understands the importance of food as sustenance for both the body and the mind. Her victory garden is starting to look great; I just hope she resists the complaints of the chemical fertizier industry who seem to be shaken by her insistence on an organic approach (the letter the MACA people sent her is posted on La Vida Locavore--a blog I highly recommend as a resource connected with today's diatribe). The White House Blog will keep us posted, and is the source of the picture: 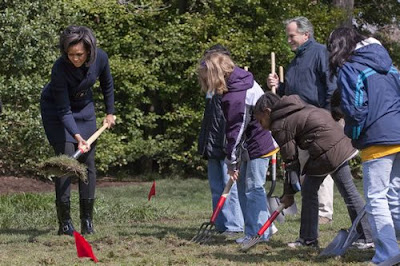 This week's assignment: visit your local farmer's market, or at very least seek out the "locally grown" section of your supermarket. Even Safeway and other behemoth conglomerates are featuring options like this, and the only way to keep them going is to use them. Eating seasonally and locally not only insures food freshness, but allows us to rely less on the energy required to transport the food, and to support the local growers whose own livelihoods depend on our consumption of their products. And don't forget to plant what you can--even if it's only a few herbs in pots on a sunny window sill. If you've got space for a garden, grow what does best, and share or trade with friends and neighbors. Please make sure the kids involved; they learn more about science and maths in gardens and kitchens than in many formal classrooms. They also get the connection between land and food imprinted on their brains, and will remember the time they spent with mom, dad, or the grandparents out planting and harvesting veggies they're far more likely to love than if someone simply tells them to their carrots.

I know there are consequences to radically shifting our patterns of consumption; but these are times for radical change and it seems prudent to use the moment to reshape the market so that we have more to say about what we eat and how we get it. For every supermarket that goes out of business, or has to reorganize its priorities, there's another tapping into the recognition that we can't go on living on pulverized, packaged, over-salted, fat-infused mashed potatoes. In the long run we all win: our bodies are healthier, the growers get their due, what we eat tastes better, and our healthcare costs go down. What's not to love?

Photos: Farmer's Market in Lhasa, Tibet by Nathan Freitas via Wikimedia Commons. White House Garden photo from the White House Blog.
Posted by Owlfarmer at 7:29 AM

Thanks for this post, and all the wonderful links to more information. The Farmers Market link is priceless, and I'll be using it.

I am trying to be less wasteful, more frugal; I now try to use every last item of food before it goes bad and I have to throw it away. Leftovers are being repurposed more than ever before. We are also going to start a garden in the next few weeks.

For example, I made a small amount of fresh strawberry jam yesterday, as I had some strawberries that were overripe. I then used this jam in a cookie recipe later that afternoon. I also recycled some chicken paprikash pieces into chicken soup, and made some homemade noodles for the soup -- I didn't have any noodles, and hubby suggested making my own. (light bulb goes on in brain) So I did, for the first time in my life, and we loved them better than store bought!

Tonight I will be recycling some meat loaf along with some spaghetti...

Oh how I do agree with you! There is a growing movement in UK to eat more thoughtfully - sadly too many families are hooked into grazing on junk food. It's a battle being fought in the schools together with obesity . . . when will the penny drop?

Farmers markets are just great for getting fresh produce at a reasonable price.

I am so taking a pictures of the gardens in front of my house. WE have onions, jalapenos, Lettuce, Cabbage, we just started to grow an orange tree and have set in some strawberry vines. In our old house we had a fig tree. I remember when my grand father and I put it in the ground I was 4. Since it has grown to be a huge tree. I have not been back to visit my grandfathers house on so long and i bet the new tenants probably just let the tree die. :-(. I will send you the pixs so you can see what a beautiful garden we have, but is in danger because of the new ordinance that the city of mesquite has put in place. to them this vegetation is a nuisance and must not be visible from the street. It is only a matter of time before the city workers come by and leave notice that i must take all my vegetation up.

Jesus: I just posted on your blog with some suggestions about how to deal with the city of Mesquite. Current trends are on your side, but you'll have to garner support from your neighbors and local community activists. Your garden can be saved, but it will need your effort to make it happen. Good luck!