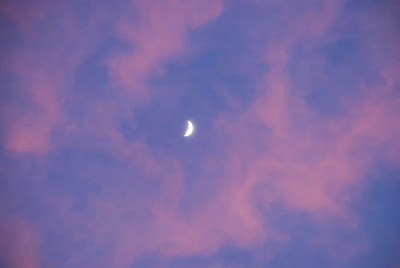 I seem to take lots of photos of the sky at odd times, but this particular shot represents a prelude to a significant evening.

On June 20th, 2007, in one of baseball's more poetic moments, Sammy Sosa (former Chicago Cub, playing in a Ranger's uniform) hit his 600th home run against his former team. 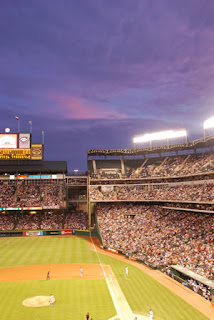 Now, I'm one of those unfortunate folks (a Cubs fan) who lives in a state and a town in which their favorite team does not play. Not only that, but this particular town has an American League home team, and I'm a National League fan (for the most part; I grew up an Angels fan, and still wear Rally Monkeys to Angels games against the Rangers). So this was a special night in more ways than one. Anticipation ran high, and I took about a billion pictures, starting with the two included here, of the pretty crescent moon at sunset, and of right field with the sky behind the Home Run Porch, just as things got going.

Later that evening, Sammy, whether aided by prohibited chemical enhancements or not, hit the big 600, and the crowd went nuts--including me. In my excitement I got a shot of him at bat, and then another of him running the bases, but was jumping up and down too hard to shoot the actual hit. Most of the pictures I took were of the Jumbotron replaying actual event, and of his teammates jumping all over him.

But who cares. It happened, and I got sky pictures. So, since I will undoubtedly be in no shape to submit a photo next Friday (if I'm lucky; see my post on Monday, April 6 for that story), this one honors the beginning of another season.

If anybody wonders why this post is here, on the Farm, may I remind you of the late George Carlin's very funny routine comparing baseball and football. Baseball is, after all, about getting home:

In baseball the object is to go home! And to be safe! - I hope I'll be safe at home!

To my beloved Cubbies: Maybe this year!
Posted by Owlfarmer at 3:23 PM

Great shots with soft colors. You sound like my Red Sox fan husband, only they've finally broken that curse! "maybe next year"

Really marvelous shots! The softness of the sky is the total opposite of what you sense about the stadium and the contrast is really cool! Besides, it sounds as though you had a great time, it was a fun read! Thanks!

Beautiful shots - great story. I will be looking at Monday's post for the rest of the story.... be safe at home.

Braves fan here, but we all love baseball. And sunsets. It's great that you were there for Sammy's 600th as well as that beautiful sunset sky.

This really is my kind of image. I am a sucker for a purple haze.

That was a beautiful sky that night.
May the Universe keep you safe.

You captured that "just perfect" time of day!

Oh, you poor soul. It's kind of like my husband who is a Vikings fan.

But the pictures are worth it!

such a pretty sky!

Beautiful colours.
Have a wonderful weekend.
Mary Elizabeth.
From Now and Then.

Ok, this is really what brought me to your blog, so I'll comment here... such beautiful skies over the ballgame, I would definitely have been distracted momentarily, and of course snapped a few marvelous photos!