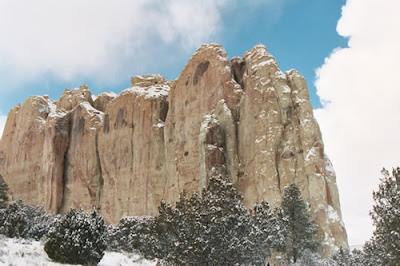 In my travels to and from California, I make it a habit to stop at ancient Native American sites like Chaco Canyon and El Morro National Monument.

Living in the lanscape seems to be something of a lost art these days, but the ancient Pueblo peoples, their ancestors, and some of their descendants seem to have married their need for shelter and sustenance with what may be an even deeper need to acknowledge place.

These two shots were taken on the same trip in December 2003-January 2004. For the first, we took the loop south from I 40 at Grants, New Mexico, and were greeted by the remains of a snowstorm. El Morro was almost empty, and the snow about three feet deep. It was white, pristine, and quiet. I was primarily there for the petroglyphs, but the natural beauty of the place is really distracting--so I took almost as many pictures of the cliffs against the sky as I did of anything else. (The photo I used for my Earth Day post yesterday was also taken at El Morro.)

On the return trip, on New Years Day of 2004, we also left I 40 at Grants, but this time drove north to Chaco Culture National Historical Park. It's hard to get to, because the road isn't graded (and the turnoff is easy to miss), but well worth seeing. The second photograph is of the back wall of a small pueblo, Hungo Pavi. The day was cloudy, but I love clouds, and the dreary skies provided a terrific backdrop for pictures of the ruins. Because of the holiday, this park was also nearly empty (except for a van-full of archaeology students from Arizona), and the combination of striking views, ancient buildings, and sheer quiet was hard to leave behind. 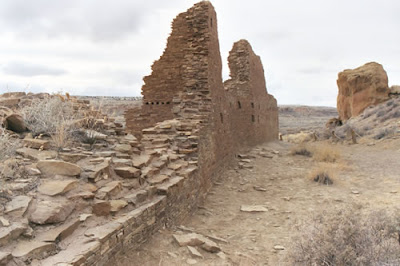 Happy Skywatch Friday, everyone--and I hope most of you are getting over winter's chill and on into springtime--or enjoying fine fall weather in the southernmost part of the Skywatch range.
Posted by Owlfarmer at 12:35 PM

Beautifl photos. Great place to stop and snap some pictures. Thanks for sharing.
Mary Elizabeth @ Now and Then

Lovely shots, especially the first - it's great to have somewhere completely to yourself :) And the second, it's melancholic, but peaceful, as the old buildings return themselves to the land.

Love, love, love your pictures. Unfortunately, the remind me of the tooth I chipped this week!!!

Owl - my husband and i have travelled in Utah, New Mexico and Arizona to the many Anasazi ruins and to the modern day pueblo villages. To my dismay, we never did make it to Chaco Canyon, of which we have numerous books and articles. There is brilliance in how these people made use of local materials to create their habitations so their sense of place is inextricable entwined with their locality - to the point of abandonning their places of abode when the land could no longer sustain their populations. in the Hopi villages of Arizona it is instructive that people live at the top of buttes, but farm in the flatlands below and haul their water up to their aeries. They are in tune with the cycles of seasons and extract no more from the land than is necessary. There is a grace and dignity in living in that way, and of course, breathtaking landscapes that put modern aesthesized communities to shame. Or maybe i am just a hopeless romantic, because i do know that living in the Hopi manner presents many difficulties and discomforts, all the more well borne because of long-lasting life traditions of the people.

I love the rocky outcrop with snow as well as the beautiful ruin.

Great photos... I've been wanting to visit Chaco for years, but haven't made it there yet.

I esp love your first photo of the cliffs at El Morro with the snow. ;)