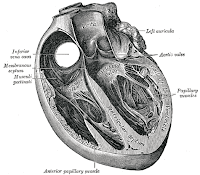 The big day is slipping into view; I'm scheduled for left/right cardiac catheterization tomorrow, to be followed (soon, I hope) by valve replacement surgery. Because of my age and the level of my infirmity, I'm pretty sure I'll be entering the bionic age with a mechanical valve, which will (at least until I get used to it) remind me constantly of its presence, by tick, tick, ticking away.

The sound is supposed to be reassuring rather than annoying (according to most of those who have one and report on it in the Valve Replacement Forum) and thus is much better, as they say, than the alternative. For some really cool pictures of valves and other heart-parts, see my post on the Cabinet, "A Brief History of the Heart: In Pictures," and for the saga of my previous adventures along these lines, see my December 2008 post, "Cardi-ology" here on the Farm.

Since aortic valve replacement is turning out to be the celebrity surgery du jour (with Barbara Bush, Robin Williams and Astros third-baseman Aaron Boone joining the ranks just last month), it seems to be more common than most people think. Other valves need replacing, too (mitral and pulmonary to name two), often because of congenital malformations, damage through rheumatic fever, and stenosis due to age and other factors. Anyone interested in the subject should go to the Mayo Clinic's page on Heart Disease and on aortic valve stenosis. Another valuable source is the American Heart Association, which also has a page on heart valves in general, with further information on each one. The aforementioned Valve Replacement Forum has a wealth of information and first-hand accounts by folks who have undergone a variety of procedures. I joined a couple of months ago, and there just aren't words to say how valuable the information and support has been.

So the upshot is that I probably won't be blogging for a bit, at least until I'm out of ICU, and unless they give me more time than I want between the cath and surgery. According to the numbers on sitemeter, some folks actually read this thing, so to those who do, I have one question: y'all gonna be here when I wake up?

Sorry; that was yet another lame Firefly fan-joke--a line from Mal Reynolds at the end of "Out of Gas." I do sincerely hope that I'm not. Out of gas, that is. And just in case one or two geeky science fiction references aren't enough, here are a couple more:

See you on the other side (as they say on the VR Forum), after assimilation . . . . on the way to becoming a proto-Cylon. I won't be running in slow motion like the Bionic Woman, I'll be walking. Slowly. But at least I won't be getting speeding tickets while suffering from angina. (That story is on the Cabinet, says she in shameless self-promotion--again.)

When I began this blog, I had in mind a focus on hearth, heart, and home--although I don't think I meant it quite so literally. But thanks for reading, and wish me luck.

Image credit: Diagram of heart valves, from Grey's Anatomy via Wikimedia Commons.
Posted by Owlfarmer at 7:27 AM

I am wishing you good luck and a speedy recovery. Hope you are up and blogging again soon.

I look forward to you being back in the blogging world. Meanwhile I will just have to entertain myself reading some of your earlier posts.
I shall keep you in my heart and mind and trust the Universe to make you well.

I will keep you in my prayers. Since I have just discovered your blog I also will spend some time reading your earlier posts and will be waiting for your return.

Best of luck with the op! We'll all be here when you wake up.

I will be sending healing thoughts toward you daily. May the operation go smoothly and your recovery be swift. I, too, plan to be here when you resume your involvement here. All my best wishes for you. GEM

May the King of Heaven watch over you & sustain you through this period. I'll be here waiting when you're back on your feet & able to blog again & will look forward to seeing you in the halls at school again next quarter. You'll be in my thoughts & prayers in the meantime.

Thanks for all the kind thoughts and good karma, all of you. The information from the cath was helpful, and the docs decided to get it done as quickly as possible. Surgery's scheduled for tomorrow and I've got a great surgeon, so things are looking good. I'll post an update as soon as I can. I fully expect be be pestering folk by the weekend.

I will light a candle and think good thoughts. They do such marvelous things in medicine these days I feel positive you'll be right as rain soon!

I'll keep you in my thoughts.

I hope you are feeling better very soon! You will be showered with serious amounts of owl gifts ( atleast I hope so!! ) Take care, I hope to see you around school in the next quarter :)

-Melissa ( the maker of the owl mobile )

ok lady, so I came to check on you. I am guessing your probably lying in ICU or recovering from surgery as i speak. I hope everything went well and look forward to listening to the ticking sound coming around the corner. your new name shall be hook i will make sure and keep all enormous reptiles out of your way, so we can give Pan a run for his money.

PS not sure if this is correct or not, but since you have something mechanical attached to you/your body wouldn't that make you in essence a bot? or half bot?

Anyways just random thoughts i hoep everything is well. Let me know if i can do anything for ya.

Well, for what it's worth, I made it "to the other side" as they say in the valve replacement biz. Home on Tuesday, it looks like, and I'll post on the hospital experience: a model for modern health care. Thanks for all the sweet owlthoughts (you know who you are, Melissa) and all the good karma that floated around me during the 6 hours I was under the knife. My only disappointment is that I don't make any noises audible to the human ear--except that I expect my dogs to notice it. More soon, and many many thanks for the help.

Reminds me of the crocodile in Peter Pan. Maybe he had a valve replacement rather than swallowing a clock. Glad you made it, Owl. Really, really glad. Keep looking after yourself.