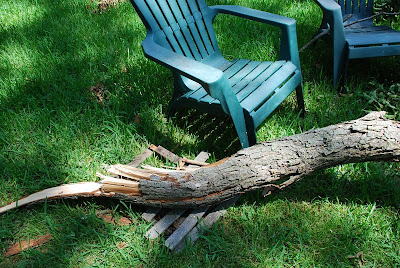 Well, maybe not. But while I was trying to think of a title for this post, I kept thinking of Monty Python and, well, one thing led to another.

I've been so caught up in skywatching and spouting about nekkid wimmen on The Owl of Athena that I've neglected my focus on home, hearth, and sustainability. Not that I've let up on the reading and research or anything--I just haven't been writing about it, which tends to lead to rather disorganized thinking about it. 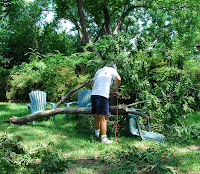 I was reminded of this last Saturday, when Beloved Spouse and I were out working on the branch that fell during our first big scary storm of the season. I've seen several tree companies in the area sawing off scraggly bits and hauling away logs that could be used for firewood (and many of the houses being serviced do have fireplaces--but I guess they're the gas variety and don't burn wood). These tree people use big smelly chainsaws that make more noise than Armageddon, and pollute the bejeezis out of the nearby air.

So it was with a large measure of smugness that I watched my dear husband going at this large limb with a smallish electric chain saw half as loud as its "professional" counterparts and not the least bit smelly. And we have added significantly to our supply of winter firewood. We still need to tidy up around the mess the branch made when it fell (squashed drinks-tables and a demolished plastic Adirondack knock-off), but that's easy compared to the hacking up that had to be done before anything could be moved. Were we younger, more agile, and had better backs, we'd probably have one of those two-handed saws that lumberjacks used to use. The electric saw is a compromise that allows us to do the work despite our physical shortcomings. People are constantly making fun of our wimpy power tools, but we rather like the fact that they do the job and they don't stink.

Mind you, we do own a gas-powered chipper-shredder, which will have to be powered up to deal with the huge pile of otherwise unusable bits and pieces. The only reason we don't have an electric version of this is that the one we bought when we realized we'd have to deal with a never-ending supply of fallen twigs gave out almost immediately, and the company wouldn't fix it. Not only that, but nobody around here could figure out how to repair one, so we gave in. But everything else--lawn mowers, trimmer, pruning tools, etc.,--are either electric or human-powered. Even our barbecue is a charcoal version, which we light with a chimney gadget. This avoids the inevitable kerosene smell that otherwise permeates the neighborhood during grilling season, which we notice because we usually have the windows open.

Now that the temperature is topping 100 degrees F, we've had to install our three window air conditioning units, but the rest of the house stays open. We don't have to fire up the A/C until mid-afternoon, and then we hunker down with the dogs in the baseball-watching room if we're not out of doors. Saturday, after hours of sawing and digging (I'm still trying to plant tomatoes), we went out for a late lunch, came home, and collapsed. The heat index was somewhere around 107, so we just gave up.

It does feel good, however, to be doing what little we can to opt out of the over-the-top, lawn-tractor and behemoth-power-tool culture we live in. We get a good workout, the air doesn't smell bad when we're done, and we've recycled wood that some might just send away. 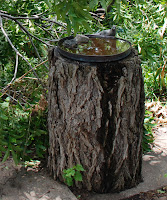 I'm also reminded that there are all manner of wonderful things that can be done when trees have to be toppled, as the elm next to the house did just after we moved here nine years ago. A trailer full of migrant workers and their boss stopped by and offered to take it down for $300, so we let them. The boss wasn't happy when we insisted on paying the workers ourselves (after we asked him what they would earn), but the guys who actually did the work were tickled, and we felt better about paying so little for the job. They, by the way, only used the chain saw for the biggest bits; all the top work was done with hand saws.) At any rate, we got some great sections of elm to use as birdbath holders and such around the yard, and they're still in use today.

The most significant lesson from our recent experience, however, is that we're going to have to hire a professional arborist to come in and assess the likelihood of more branch disasters. Several of the trees on the property are at least as old as the house (built in 1922), and dead branches fall with every gust of wind. Since a couple of these trees overhang the roof, they could end up causing major damage.

At the turn of the nineteenth century, when this town was being built, transplants from the east were moving in, and they built what reminded them of home: big Queen Anne Victorians, Colonial mansions, a few Cape Cods, and even hybrids of the newest thing from California: Craftsman bungalows like ours. But some of these houses tended to be a bit fragile for the weather, so we were again fortunate that our house is pretty solid, stays relatively cool in the summer, and is situated to take the best advantage of the sun year round.

The trees help with this, but the advent of tornado season reminds us that there's almost no place to live in the world that doesn't harbor the potential for danger of some sort. We can be thankful that we don't have to worry about earthquakes (although those are happening nearby, perhaps caused by gas drilling along old faults), hurricanes, and floods (at least not in this particular neighborhood).

Were I ever to move and to build a new house, rather than recycling one, I would certainly spend time trying to maximize the appropriateness of design to environment. But for now, as I look out back on the newly tidied section of the yard, I can enjoy the tall old pecans and hackberries, and be grateful to whomever it was that decided to build this house out of solid shiplap timber rather than lathe and plaster. It's nearly noon as I write, and the house is still blessedly cool, while all around me air conditioners are cranking away, and I can hear the din of them behind the chirping of birds and the snoring of dogs.

Photos: A closeup of the split branch, atop the cheesy little table it smashed; Beloved Spouse at work; new additions to the woodpile; the birdbath atop an elm chunk--the "bird" is a metal pheasant we found in the bushes after we moved in. All shot with our trusty Nikon D80.
Posted by Owlfarmer at 6:55 AM

I agree, there is something very satisfying about doing hard work by hand. We had some dangeously rotted lodgepole cut down at the cabin. The men who did it cut them in rounds and left it to us to split. I enjoy doing it and woe be to the male that thinks he needs to help the "little old lady". I use wedges and a sledge hammer as I feel I am not strong enough to safely wield an ax.
In Lincoln we have decided to remove the small lawn to save on water. I investigated various methods and opted for brute manual labor. A shovel and muscle power does the job.
Hubby seems content to let me do it though I feel a little guitly when the neighbors tease him.