A Weird Week of Watching Skies 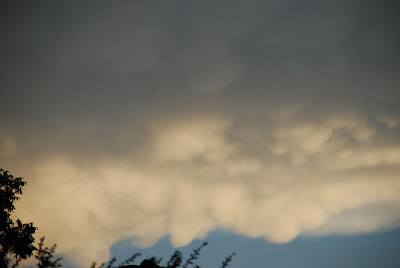 I mentioned last week that we prairie dwellers are on the brink of Tornado Season, and so it is that I find myself looking out on the destruction wrought by Wednesday night's beastly weather, and contemplating This Week in the Metroplex. The opening shot is of what things looked like Thursday morning as the First Big Scary Storm of the Summer was on its way out. But I'm getting ahead of myself.

Things started off calmly enough, but on Tuesday I spent two hours stuck in traffic for some still unknown reason. Two hours it took, to drive 30 miles. As I sat in the town of Allen, waiting to go south, I cursed the loss of prairie I can't help but ponder when forced to do so by lack of motion through the landscape. When I first moved to north Texas, this was all farmland. And as I crept through the sprawl (malls to the left of me, malls to the right) I lamented the absence of the cows and occasional horses or goats one could once see grazing alongside the road.

But I also realized that I would not have been sitting there at all were it not for the fact that the populace of this very town is why I was in my car and not on a train. Allen has repeatedly voted against extending light rail north from Plano (the next town south, in which I spent another hour, sitting), even though McKinney, the town I actually live in, is all for it, and I live within walking distance of where the station would be. Allen's reasons are stupid and perhaps even racist, so I won't go into them. But I sat there, waiting. I was in the center lane, and nobody would let me into the right lane so I could access an exit. I was well and truly stuck.

In Plano a half hour later, I amused myself by taking pictures of the sky with my iPhone through my buggy windscreen, getting these two shots of mixed clouds, a contrail, and one of many extremely tall light standards designed to keep us from ever seeing stars in this part of town. 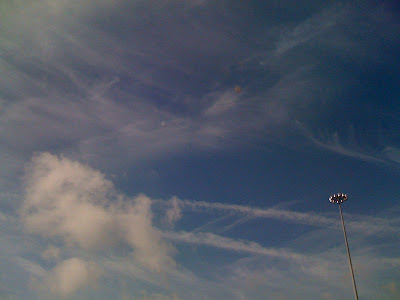 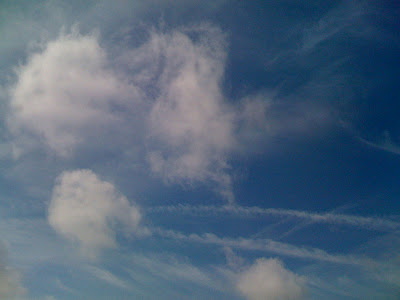 On Wednesday afternoon tall billowy clouds started rolling in, and since it was hot and soupy out of doors, I knew we were in for it. The radar showed an ominous rainbow line of Weather (capital W) moving out of the west, heading straight for us. Purple tornado warning boxes started popping up on the maps, so we secured the house and sat watching the local ABC affiliate's coverage--which is always wall to wall and illustrated with film from a helicopter crew. I tried to go out for pictures, but y'all are probably tired of gray cloud shots (there seems to be a general preference for sunsets among the Skywatch Friday crowd), and that's all there was to see. This morning I did get the line of the front (see the opening photo), but by yesterday afternoon the standard non-threatening clouds were back, and the rest of the pictures show the results of Wednesday night's excitement. We missed out on the tornado fun, but at least one 80 mph gust went through and left this in its wake: 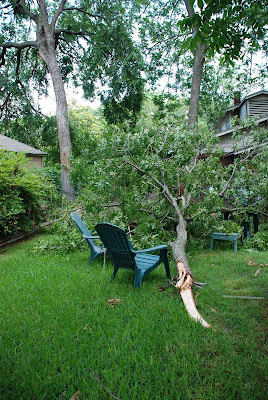 And this, conveniently superimposed on a nice, calm, blue and white sky, is where the branch came from: 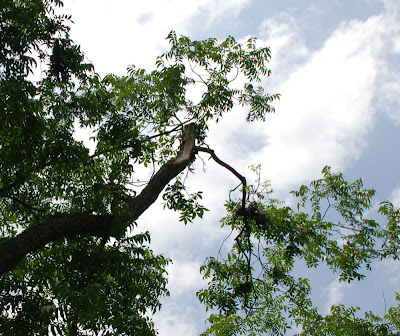 As soon as it's dry enough, we have to get out our electric chainsaw and start working on the newest addition to our woodpile. The branch is from one of the pecans, a ninety year-old dowager that's been here since before the house was built. It will mean more necessary sun for my little potager, but it also means that we have got to get an arborist in here to assess the health of the others and do some preventive maintenance on the eldest. This is the second honking great huge branch to fall in this very spot (the other was from a now-removed elm tree in my neighbor's yard), and I'm just glad we weren't sitting under it. We only lost a couple of flimsy wooden tables and a plastic lawn chair--both of which were going to be replaced anyway. The final shot is of the remains of the branch, with its open wound, against the innocent-looking early afternoon sky.

Last night (Thursday) we celebrated our relative good luck by driving to west Plano to see Up! in digital projection, passing downed trees and raw wounds from fallen branches all along the way. That morning I'd been nearby and the storm was still wending its way through town, although it had pretty much blown itself out by then. The movie was great, and when we emerged, I took the final shot with the iPhone. Everything's back to normal: parking lots, pickups, too many lights, and a typical north Texas sunset. 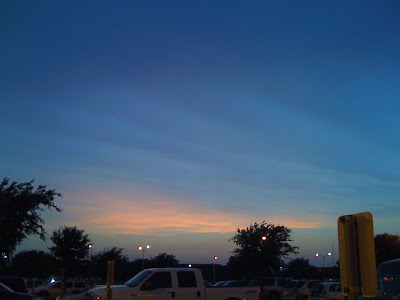 Have a great, non-stormy weekend, Folks--and a happy Skywatch Friday.
Posted by Owlfarmer at 11:57 AM

iPhones are useful for photos 'on the run' as it were though of course you were sitting still much of the time. There's too much light pollution in UK too (can there ever be just the right amount?) but some councils are waking up to the idea that low emission lights and less of them are 'a good idea' though for cost-cutting reasons rather than green.

I just moved from Irving Texas to Newtown Pennsylvania a few weeks ago, but when I lived in Texas I loved to watch the big storms. I also took a picture that looks just like your second one with the light pole. I only made over to Mckinney once but it was nice to walk around the little downtown.

That first photo is fantastic! I have always wanted to see cloud formations like that in person but I guess they are a warning of bad things to come! Great sky watch entry! The great big skies of Texas!

Terrific shots, gorgeous colors and clouds! I've been hearing a lot about the weather in Texas from my son who lives in Garland. Hope escape the bad storms this season!