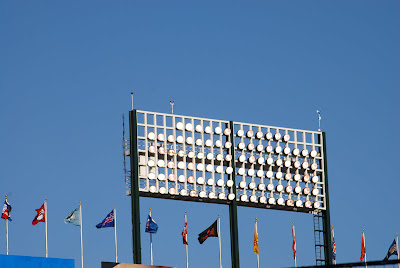 Of the over two hundred shots we took of June 17th's Rangers interleague game against the Dodgers, several are of the sky.

We had great seats, ten rows up in the section just behind home plate. I was so close to the "special people" boxes that I even sneaked a couple of pictures of Nolan Ryan (got a great shot of his bald spot, which out of respect for one of the game's greatest pitchers, I will not share with you).

But I kept getting distracted by what was above the game (which the Rangers actually won), and here are the results. The opening image is of a bank of lights in center field, which I kept trying to frame so that I got the league flags in the picture as well. They were a little limp at the moment but the wind picked up shortly thereafter.

I'm too lazy to look up the score, but there were home runs, and these two shots show the fireworks and their aftermath against that blue, blue sky: 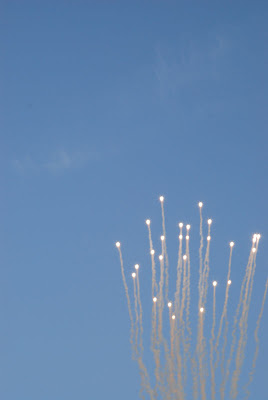 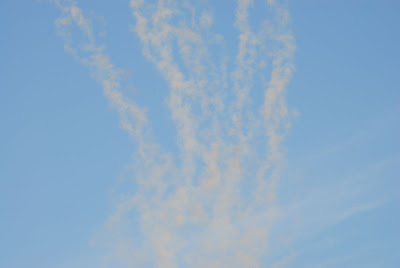 During a lull in the game I played around with the camera by looking up and leaning backwards, toward the nosebleed section behind us. I got both vertical and horizontal versions of the cirrus clouds that offered the only interruption in the field of blue, blue, blue--which translated later in the week to hot, hot hot. The high today will be 103 F. Summer has indeed arrived. 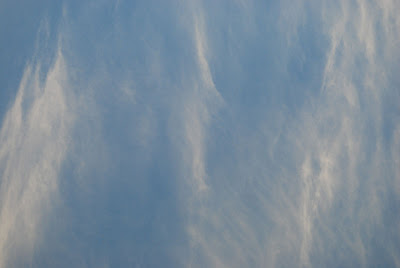 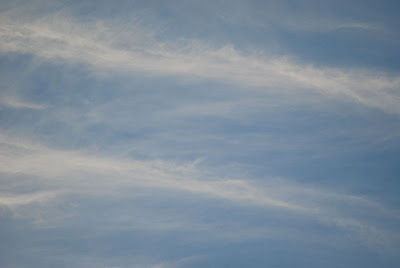 Happy Fiftieth Skywatch Friday, People. Hope it's cooler where you are!
Posted by Owlfarmer at 6:10 AM

Lovely, beautiful shots! Do love those blue skies and gauzy, whispy clouds! And yes, summer is finally here -- even in the northwest!
Have a great weekend!

Nice shots. Not cooler in Sacramento, 107 forcast tomorrow but I think it is dryer here so it feels a bit cooler than Dalles.
We'll go back to the mountains next week.

They have just opened a new baseball stadium, here in Reno, I'm looking forward to going to some games..

I envy all three of you your mountain and/or foothill views--which probably supply some relief--but it sounds like the temps are hot enough wherever you are.

Karen, if you've never seen a minor league baseball game before, you're in for a treat. It's baseball as it should be played, and depending on the team and the stadium it can be hilarious as well. Look up Mike Veck on Google to get an idea of what can happen in a minor league park!

Beautiful blue sky and wispy clouds.
Baseball crowds always seem to enjoy themselves so much (based on very little evidence, I have to say)

Nice fireworks....it's supposed to cool off up here today :)