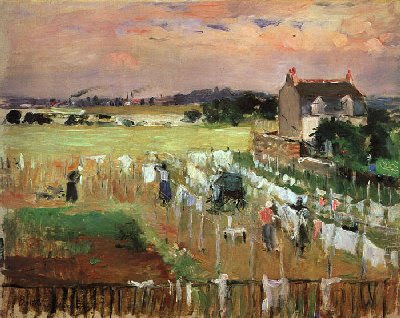 Clairz's response to my last post brought on such a nostalgic wash of memories that I had to get the following down before I could begin to deal with the usual Sunday class-prep chores.

My best-ever laundry story, bits of which may have already been told on this blog, involves mulberries, Cedar Waxwings, and three dozen cloth diapers.

When we first moved to this corner of the globe from New York, my growing family rented a little house in a close-in northern suburb of Dallas in an old development marked by Cape Cod inspired cottages on streets with New Englandish names (ours was on Provincetown Lane). So much for genuine prairie living.

Out of this little house my daughter was born, three months after we moved in. Because I was something of an earth mama (and breast-milk pumping donator to a Red-Cross milk bank, don'tcha know), I eschewed the growing practice of wrapping one's baby's bum in paper and plastic. For the first couple of months I subscribed to a diaper service; after that, it was washed-at-home and dried-in-the-sun cloth diapers--a couple of which I still use as dust cloths. I only ever used disposables when travelling, and since we didn't travel all that much and my kids toilet trained themselves early, I've never had to feel particularly guilty about contributing very many nasty little bundles to landfills. 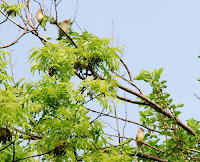 Our laundry room was just behind the kitchen, but I had to go out into the garage to access it, and I only had my 35 year-old Maytag washer--no dryer. Even when I got one, a couple of years later, I preferred to hang my laundry on an umbrella-type clothesline. In that first house, though, I simply strung line from one tree to another in the back yard. Adjacent to the yard, however was another tree: a purple mulberry. Once or twice a year now I note the coming and going of Cedar Waxwings, mostly because of the experience that summer, thirty years ago when the mulberries fruited later than usual, and I wasn't paying attention. One day, after washing the week's diaper pail contents and stringing them like white flags all over the yard, I went in for a "feed and read" (when I nursed the baby and read to my son). After the children were down for their naps, I went out to check on the diapers.

My flags, alas, had been profusely decorated with purple mulberry-juice colored bird poop. Every last one of them. And the culprits, dozens of them, were still there, chirping and pooping away, all over the diapers. I truly didn't know whether to laugh or cry.

In the end, though, I took them all down, re-washed them (with a bit of extra Clorox--because I didn't know any better at the time), and re-hung them after the birds had left for the day, just in time to start supper.

Many years later, when the children were grown and their parents were each well into new lives with new spouses, and after I'd spent several year living a more urban life (in Chicago we had to use a laundromat, but in Dallas I still dried my laundry on the line whenever possible), I ended up in this wonderful old house with a back-porch laundry room that reminds me of the one my grandmother had in her little house next to the Cottonwood power plant in Owens Valley. Even the house in town where she moved after my grandfather died had a washing machine (but never a dryer) on the back porch, handy to the clothesline outside.

I have an energy-efficient gas dryer now, and, alas, tend to use it more often than not. But I try to get bedding, dish towels, cloth napkins (I've never used the paper versions of those, either), and even bluejeans out on the line. I actually enjoy seeing them all strung out from my study window, especially when there's a breeze. Clair's remark about neighborhood objections to sights like these reminds me of why I chose not to live anywhere with a "neighborhood association" or zoning restrictions on laudable objects like clotheslines, chickens, victory gardens in front, and the like. I guess one of the best things about living in an historic district is that they sort of expect people to hang out the wash--or at least they know enough to tolerate it. As long as I don't hang out Beloved Spouse's y-fronts in the front yard, I don't think anyone around here would really complain, anyway.

The irony, of course, is that in this time of economic difficulty and environmental hazard, simpler technologies and old-fashioned practices make increasing sense. I hope that the situation ends up causing enclave-dwellers with restrictive HOA rules to re-think the nature of the communities into which they're gating themselves. Flying knickers on a clothesline actually say better things about a person's ethics than dwelling securely behind iron bars, free from the "taint" of chickens contentedly clucking as they rid the yard of bugs and lay lovely fresh eggs, or the uniquely reassuring smell of laundry dried in the sun.

Image credit: Berthe Morisot, Hanging the Laundry Out to Dry, 1875. Via Wikimedia Commons.
Posted by Owlfarmer at 2:03 PM

What a great story. I have nice memories of my mom hanging clothes out in our back yard.

Those waxwings are a hoot!