A Hint of Fall 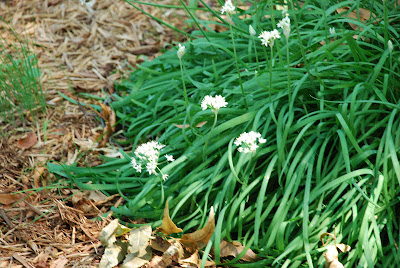 It's not quite September yet, but we're getting our first taste of fall. A cold front drifted through yesterday, and the overnight temperature dropped to 65F: blanket weather! We haven't had the window units on for a couple of days already. I'm not sure how much money that actually saves, since the animals shed more in the heat, and I expend a measurable amount of electricity hoovering up. Great mounds of hair came off of Woody (a tall, elegant mutt with an undercoat like a Huskie) when I used the furminator on him, and I need to repeat the exercise today, unless I can convince both dogs to spend most of the day out of doors, shedding into the grass.

If it weren't for the mozzies, this would be perfect gardening weather. I am, in fact, going to suck it up and dowse myself in repellant later, so I can execute some cleanup. We attempted to sip our wine out under the trees last night, but despite my new herbal spray bug-off stuff, I was bitten eight times in five minutes, so we quickly retreated. It's back to the Cutters today, I'm afraid. But the chives are in bloom, the tomatoes have finally set fruit, and the mexi-bell peppers are beginning to ripen, so it's time to tidy up and plant a few fall things (beans, squash) and splash some nourishment around.

A couple of weeks ago, when we were feeling particularly flush, we visited Elliott's Hardware (a real, old-fashioned hardware store that reminds me of Gwen Gardner's store on Main Street in Lone Pine, even though the merchandise is spread out over much larger area and is rather easier to locate) and bought a rain barrel and some Garrett Juice. The rain butt hasn't been installed yet, partly because it's so butt-ugly (sorry) that we can't decide where to put it; it's just like the one on this how-to video, so at least we'll know exactly how to do it when we figure out where it goes.

The Garrett Juice is the ready-made version of a concoction invented by local organic gardner, Howard Garrett (better known around here as the Dirt Doctor), who offers instructions on how to make your own on his website (He also explained how to make your own rain barrel in a recent Dallas Morning News column). But since I'm never that organized, I bought a couple of gallons of the concentrate, and smaller jugs of the special versions for tomatoes and veg. Those go on the garden today, although the front-porch pots have already been given their treat and are much the better for it.

Even though I know this lovely, cool weather (it'll only get to around 88F today, and the humidity's so low that it won't feel any warmer than that) won't last longer than a few days, I'm ready to enjoy it. I experienced one of those smell-related floods of nostalgia this morning when I cut open a peach and was transported back to my grandmother's kitchen. The sheer dryness of the morning, combined with the rich, ripe fragrance of the peach reminded me immediately of late-summer high-desert mornings in the kitchen of my grandparents' bungalow next to the LADWP power station at Cottonwood. I'm not sure how we got the peaches (I remember mostly blackberries and walnut trees, but there were probably fruit trees as well), but they were sweet and juicy and sticky and smelled fantastic. To this day I judge a peach by its potential to rise to that standard.

I was fortunate on my way home from class on Thursday to find fresh, local white peaches on sale at the grocery I'm frequenting until Whole Foods opens nearby. (No, I'm not boycotting Whole Foods Market; the CEO is entitled to his views and I'm not about to condemn the whole store because I disagree with him!) Anyway, I bought two huge peaches that smelled promising, and the Beloved Spouse and I shared one this morning.

I spent the rest of my morning-sitting-in-comfy-chair-reading time drifting back and forth between north Texas prairie and eastern California intermontane desert. Not a bad way at all to start the day. 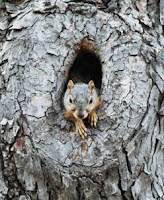 This afternoon will be devoted to compost turning and sweeping up squirrel-dropped half-eaten unripe pecans, cast-off squirrel nests, and myriad broken branches that have come down as a result of the nice breeze blowing through. I'll also clear a spot for beans and squash, and maybe plant some amaranth in the border, where I've got some gaps left by Beloved Spouse's overly-enthusiastic "trimming of the verge" earlier in the summer. I just might then mosey over to the garden store for a new watering can to use with the Garrett Juice. Something purple or periwinkle blue would cheer me up no end when the weather goes back to being miserable, before fall really does set in.