Not So Bad News From Nowhere 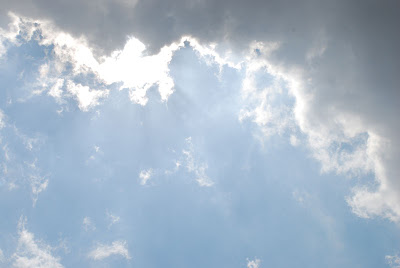 I'm not usually one to find--or even seek--silver linings, but I keep seeing examples of positive outcomes from the recent troubles plaguing economies around the globe. It's much simpler, of course, to notice these locally, in the United States, whose population is far wealthier than many on other continents. And once again I do not mean to belittle or diminish the suffering of those who have lost jobs, income, homes, and livelihoods because of the recession.

However, it's impossible for me not to attend to some signs of useful change, especially when articles about shifting economic priorities are continuously being featured in the news, and not only on the front page of the daily rag's Business section or in the Economics And You portion of the op/ed pages. They're showing up everywhere: Front-page news about new kinds of jobs; articles in the Features pages about xeriscaping, organic gardens, city chickens, eating well at home on less, and wiser shopping; the Metro section's pieces on local green buildings, efforts at pollution control, and more healthful lunches in school cafeterias.

I admit that some of these might be more indicative of negative economic issues (less shopping means less income for merchants, and the possible failure of more businesses), but on the other side of the situation lies the possibility that we're exchanging our recent greed-based acquisitiveness for a more home-centered, frugal way of life (in both economic and environmental terms). This shift promises to generate new businesses that more responsibly serve local communities.

One ironic result is that bankruptcies of large franchised businesses might bring back the mom and pop stores, the small-business entrepreneurs that once served as the mainstay of communities but which have been all but eliminated by the rise of big supermarkets and dime stores--later, dollar stores. Cheap goods available at big boxes are attractive on tight budgets, but they rarely reflect a community's values or address their real needs. Perhaps in a sliding global economy the old post office-general store-pub/cafe culture might again knit villages and small towns together into viable decentralized economies.

I'm not terribly sanguine about this prospect--because all the talk about new energy sources seems to focus on huge systems of power transfer across immense grids--but I can dream. My utopian bones are vibrating to the tune of possibility. What if, for example, somebody could design local energy systems fueled by wind and sun, and every member of the community could contribute to a local collection/distribution grid? Instead of sending all of McKinney's coal/nuke/wind-generated energy into a regional MegaPower company (in north Texas that's OnCor, even though Beloved Spouse and I buy our power from Green Mountain), we could create our own with home- and business-based systems of wind and solar collectors.

Instead of massive powerlines carrying electricity hither and yon, we could make and use our own, and send the excess into a locally centralized storage system (that would require fewer lines, most of them underground, perhaps) for distribution among members of a local co-op.

While I'm fantasizing, how about a taxpayer-supported (i.e. shared) system of garden allotments within city limits, in vacant lots of failed big-box stores, where mini-produce farms and "farmers" could grow what they want to eat, and share the surplus with one another and needy families. Children could be taught the principles of organic gardening as part of school curricula, and even perhaps get their hands dirty with a bit of weeding and harvesting.

I have never really understood why "civilized" folks seem to measure their success by how many of their needs are supplied by other people: the ones who collect our garbage, service our sewer systems, take care of and educate our children, clean our homes, cook our meals, make our clothing, etc. "Successful" Americans buy huge suburban houses with environmentally absurd expanses of lawn, and then hire labor forces to cut the grass and deposit the clippings onto city streets with noisy, air-polluting leaf-blowers. Then we complain about paying the taxes that allow the city itself to hire people to clean the streets. But the economic downturn shows some promise of stimulating a bit more self-reliance among local citizens.

What I'm noticing in the papers and in news sources online is an increasing number of stories about people who are learning to do more for themselves, or at least to channel their cash into projects that help communities rather than focus primarily on their own little plot of land. In some cases, the stories are about wealthy folks out there doing the right thing with their big yards--turning them into more natural or at least environmentally sensible landscapes, or even into appropriate gardens. Even if these folks are doing so to save money on increasingly high water bills, the motive doesn't negate the beneficial effects of their actions.

Neighborhoods of suburban moms who have been a bit reluctant to shell out cash for high-dollar summer camps are sharing expertise among their children, providing mini-camps that teach kids how to garden, sew, and cook. Cash-strapped families are staying in town, or at least close to home and taking advantage of local museums and arts venues. If families keep this up, we might generate both brighter kids and closer-knit communities.

Some of the high-dollar government incentives to stimulate the economy seem to be working, and some show real promise: Cash for Clunkers, tax rebates for first-time home buyers, and the up-coming energy-efficient appliance rebates. But real economic change should include plans to promote green energy development and support the companies that use and supply the new technologies with low-cost educational loans or programs to train people to operate them, like the one now being promoted by the President. Changing technologies means changing jobs--but it doesn't have to mean a net loss in total jobs. It's undoubtedly difficult to switch career paths and undertake new training, but it might actually be more rewarding to work for a company that won't be poisoning your grandchildren's air and water supply.

I'm perfectly aware that for every one of these "good news" articles, there are probably twenty that chronicle the bad news. But for years I found far fewer indications that we might finally be getting things right, even though I was looking for them. I started this blog in part to help me understand what was happening to my planet, by remembering what it was like, thinking about possible solutions to multiple ills, and noting what we had lost before we lost it forever.

These days I hear a lot of talk about wanting "my America" back--but I think the folks who're chanting this slogan in opposition to the present administration's attempts to help us recover from recession are failing to realize that many of us have been wanting "our America" back for a long time. And we finally seem to be succeeding. A very little bit at a time.
Posted by Owlfarmer at 8:37 AM