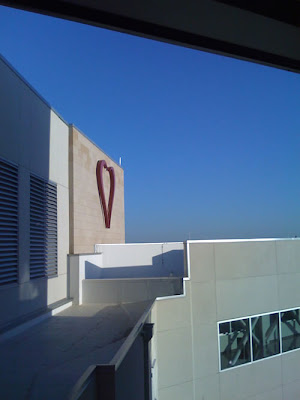 A week ago Thursday I was under the knife, and had been in the hospital for the better part of two days. I'm one of those lucky folk who lives in a fairly wealthy, fast-growing county in North Texas, where they pride themselves on showpieces: usually new football stadiums and the like. But this particular enterprise is a hospital, part of the statewide Baylor system, and dedicated exclusively to cardiac and vascular care. I jokingly referred to it as the Baylor Heart Hospital, Resort, and Spa before I went in (I checked in at the concierge desk, and could have been valet-parked; I ordered my food from Room Service) for my cardiac catheterization. I left calling it the Baylor Heart Hospital, Resort, Spa, and Place You Really Want to Be When You Need to Have Your Chest Cracked. Not particularly poetic--but very accurate. Even though my first room, on the fourth floor, had a less than stellar view (backed by the usual North Texas plain-ol'-vanilla-sky-blue), I whipped out the iPhone for a shot of the heart-hospital logo. 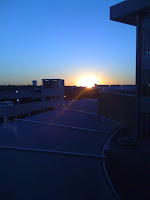 By the next morning (Wednesday), since surgery had been scheduled for Thursday, I was moved to the pre-op floor (3), and noticed when I awoke that the sun was beginning to peek up over the horizon. The room faced roughly northeast, and I was going to be able to enjoy the whole sunrise. Although both pictures I took were similar, shot only seconds apart, the first one (left) resembled a nuclear explosion more than a sunrise. That's what you get for two megapixels--but who am I to complain? At least I had a camera, and (this still astonishes me) it's in my phone, of all places. I'm only posting the one, because it was a bit more interesting than the other. But no white fluffy things showed up, so I didn't get much drama besides the potential for an alien landing poster. 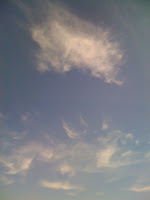 During the day, the clouds began to gather, signalling what promised to be a stormy day for surgery, and things got somewhat more interesting. Well, not really. But kind of pretty. Remember, I thought I might be savoring my Last Day on Planet Earth, and everything looked really cool to me. Not only that, the food was even good. Not just for a hospital, either. I'd pay real money for some of the food I got at that place. This time Blue Cross picked up the tab. 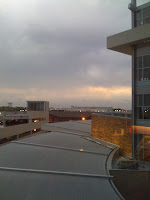 Next morning I got up in time for sunrise, but no show. The weather was turning, and we were about to get some real rain. So I took a shot from the same spot as on the previous morning, looking out over the entryway (where the valet parking happens) and the parking garage. This time it would have been nice to have a real camera with me, but it's not something most people think to put in their take-to-the-hospital bags. They wheeled me out of that room for surgery at about 11, and for the next six hours I was having things inserted into various orifices, excised, or sewn in. I awoke in my last room, on the recovery floor (2), in my own personal ICU, feeling like total crap. But I was alive--a possibility about which I had gone into surgery completely uncertain. 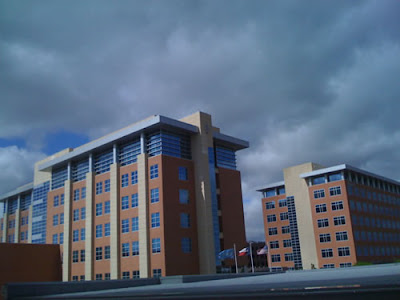 One of the first things I did when I got up out of bed was to make this image of clearing skies over the main hospital next door.

And to end my blow-by-blow account of the week's heavenly events--gazing out at which is one of the true joys of life--I took one last look at the now-clear sky, with the waxing gibbous moon sliding by: 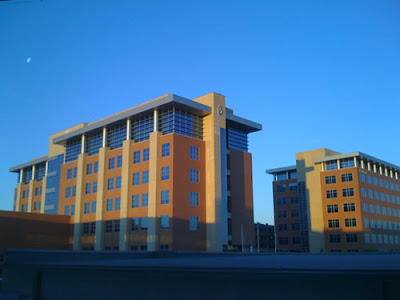 I'm really glad to be home, and to have the chance to put these up as a photographic memoir of a particularly important moment in my life. Especially since, contrary to what I had thought, I am not being continuously reminded of my new mechanical aortic valve's presence. I don't hear it. I just go on living, for what I hope now will be a long and bloggy life. Thanks for all the messages of hope, prayers, karma, and positrons sent my way over the last couple of weeks. Now it's back to the business of figuring out how to help make the world more worth living in--for everybody.
Posted by Owlfarmer at 1:39 PM

How scary that must have been, but I'm glad you are back home (as I'm sure you are!)

Such wonderful sky shots to memorialize your visit to such a world-class facility. Sounds like they took good care of you!

I'm so glad it went home and that you are on the mend. The world needs all the help it can get!

Welcome back man. Glad to hear it all went well! That hospital sure looks like a good place to be if you've got to be in a hospital.

Welcome back - so glad to hear all went well for you! Your sky pics are magnificent, as is your account of your week.

Enjoyed the photos, and I am so glad that you are well. Hopefully that will continue!

So glad you had the idea to capture the heavens on film and not with your soul! We still need you down here!

Thanks for all the kind wishes, People. You've made my day and given me a lift. I think things will be pretty much back to normal from here on in--except, perhaps for this alien growing up my sternum . . . .

It's great you have come through the ordeal, and are on the mend. And why not? Anyone who spends time pre-op relishing the phenomena available to experience is full of the life force. The hospital sounds just fine, and your photos of the skies and main buildings are beautiful. What really grabbed me by the heart is the achingly beautiful reflection of your Texa skies in the buildings' windows of your last photo on the blog. Stunning! You may have a new prosthetic device ticking away inside you ( Yay!) but you have that old lovely aesthetic consciousness residing in you, and which you can share so well with the rest of us.
We need you here! GEM

Thanks for visiting my blog and comments for my daughter which I will pass on. I really like your first photo as it reminds me of the style of painting by the artist Jeffrey Smart who paints mainly light industrial scenes with sharp edges and lots of colour. I hope you are now well.

Those buildings almost look surrealistically artificial in that light.

Glad that you're well. I'm working on the perfect recipe for you.

Heart surgery is no where near as frightening as it was 30 years ago when I had my first, at least now you can take your phone in and use it too. Nice shots you took, and being alive they will bring back pleasant memoroes in a few years.
Get well and stay well and think a little about what it is in life that you still need to do since you were allowed to remain here.

I'm really glad everything went well and that you are on the road to feeling better and happier.

Texas skies are quite magical - even clear ones. I think though we do have lovely sun rises and sunsets.

I'm very glad you are okay.