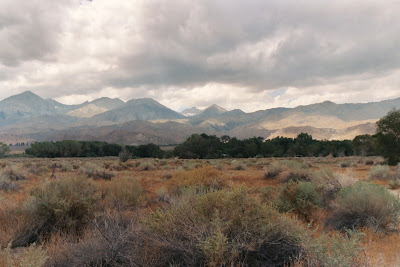 Every spring I inevitably get bit by the homesickness bug, and thought I'd show off why I get this way. The Owens River Valley in Eastern California is where my ancestors settled down at the turn of the nineteenth to the twentieth century, and where my Grandma Clarice and Grandpa Ira's children (which included my father and the current patriarch, my Uncle Art) and I were born.

I've written many posts for this blog on the history of the area and my family's involvement therein, but I don't spend nearly enough time talking about how achingly lovely the place is. My focus is always on the area between Big Pine and Lone Pine, along U. S. Highway 395. Most people travel this road on the way to somewhere else: North to Mammoth, Lake Tahoe, Reno, or south to Los Angeles, Las Vegas, or even Death Valley.

The opening shot is related to one labeled on the Farm's home page as "The Auld Sod." This is the view from the back of the old Robinson house which, I think is the oldest house still standing in Big Pine, and built by one of our Chrysler ancestors after she and her husband moved to town in 1897. The ivy has recently been removed because it was quite literally pulling the place apart, but I was lucky enough to get this picture of the house during a family reunion. The photo of the Palisades was taken more recently, at the last reunion we attended before my father died.

The second Skywatch photo was taken along the Owens River, probably on the road leading to the highway from the old Reward Mine. There's a pond nearby, and I used a picture of it for my Earth Day 2008 post (Surviving Plutopia), but I also love this one with the sky behind the marsh grasses, looking almost directly south, with vague outlines in the background of the Inyo Mountains on the left and the Alabama Hills on the right: 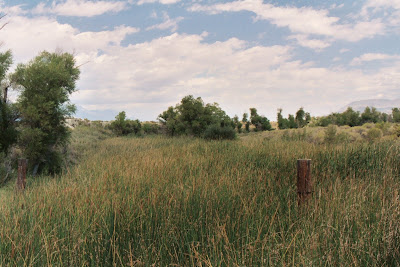 This is where my mother's DNA mixed my father's (well, probably not right in this spot!) to create a child attached umbilically to this place, this valley, so strongly that it exerts an almost physical force that continuously draws me home. I may have to wait another year, but I'll get there.
Posted by Owlfarmer at 11:15 AM

Lovely photos of a lovely place! I've been through that area numerous times and can understand it's hold on you. Hope you get back soon! Happy SWF!

Oh wow. That top photo looks like someone painted the mountains in the background. Love em! Hope you have a wonderful Friday.

I can see why you would an inexplicable pull to this beautiful place. So gorgeous. I love the photo of the old house in Big Pine, so much history attached to a building.

Nature can be so awe-inspiring... so far, our storms have not over-frightened me. Instead they fill me with wonder, and I adore being able to snap photos of them when they are far off in the distance and passing us by! :)

Such a sweet and bitter feeling, homesickness.. Beautiful photos, I love the earthy colours in the first.

It's neat to feel a part of the landscape. I have the same feeling here on the East Coast. Beautiful images.

What a beautiful peaceful place - I don't wonder you are glad to claim it as part of your heritage.

What a glorious spot to call "home" even if you must be away right now. The photos are beautiful. I'll be heading to CA by van this weekend to do some biking. We cross the Sierras from Reno to Sacramento. Is there still snow?

What a gorgeous place, I can understand why you long to return there often.

What an interesting post and great photos, happy SWF!

Now you're making me a little homesick. Since we moved from LA to Sacramento we no longer drive through the valley on our way to the cabin. I think we will make an effort to get down there this year. I want to see the bristlecone again and hike up Bishop creek, maybe even stop by the "Gorge Power Plant" though all our old friends have retired.
I'm confident you'll get there even if you have to sit this year out.